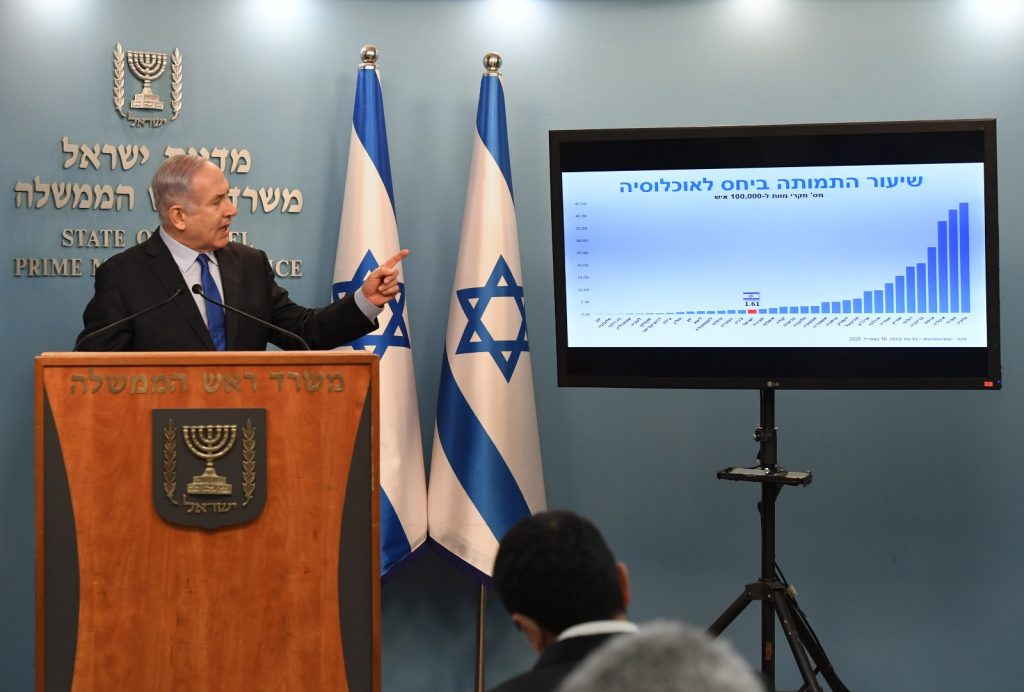 Prime Minister Binyamin Netanyahu, along with other officials, on Motzoei Shabbos announced a host of new measures to open up the Israeli economy after over a month of progressively stricter closures and quarantine measures. Along with the reopening of many stores and the partial restoration of public transportation, outdoor minyanim will now be allowed as well. The new measures will be voted on overnight by ministers.

Israelis have largely kept to restrictions that have been in place until now, and that has put the country in a very good place in terms of the number of patients contracting COVID-19. “Israel has one of the lowest infection rates among OECD countries, and among the lowest rates of death for those who contracted the disease,” Netanyahu said. “Until now we have increased closure measures and this strategy has proven itself. The positive results allow us to take gradual steps in the direction of freeing up personal space and the economy.”

However, infection rates have generally declined over the past two weeks, according to Health Ministry data.

New cases peaked on March 31 at 741 but have since more than halved, with 271 new cases recorded on April 17, ministry data showed.

With that, things will not be returning to the routine that prevailed before Purim, prior to the imposition of any restrictions. Many stores will be allowed to open beginning Sunday, including electronics, communications, housewares, bookstores, sporting goods and furniture stores – but staff in the store and customers will have to keep rules regarding social distancing. Wearing masks will remain a requirement, and customers will have their temperature taken when walking into a store. The number of people in a store at one time will be limited, and stores are responsible to ensure that their staff are healthy. Stores that violate the rules will find themselves shut down, said Health Ministry Director-General Moshe Bar Simantov.

Offices can get back to limited work as well – also within limitations. Eight people will be allowed to be in an enclosed space at one time, with a space of two meters between each person. Individuals entering the office will have their temperature taken, and masks should be worn at all times. “The preference is for companies to have employees continue working at home as much as possible,” Bar Simantov said.

Several other restrictions are to be eased as well. While the rule restricting movement to 100 meters from an individual’s residence remains in place, those engaged in sporting activities are allowed to venture up to 500 meters from their homes. Minyanim in public spaces will be allowed as well, but participants will have to remain two meters away from others and wear masks. Special Education classes will be held as well, but with only three students per class.

While things are far from “normal,” Israelis need to get used to the situation, Netanyahu said. “Until a vaccine is found for coronavirus, we will be living under a different reality. We will need to get used to the ‘normal’ of coronavirus. We will try this for two weeks, and if things go well we will announce more liftings of the restrictions,” the prime minister said.

Speaking after Netanyahu, Bar Simantov stressed that all previous guidelines for the public remained in force, including the obligation to wear face masks in public and to maintain a distance of at least two meters between individuals at all times.

He warned that people over the age of 67, as well as those at high risk of illness should remain at home for now, even as some of the limitations have been raised.