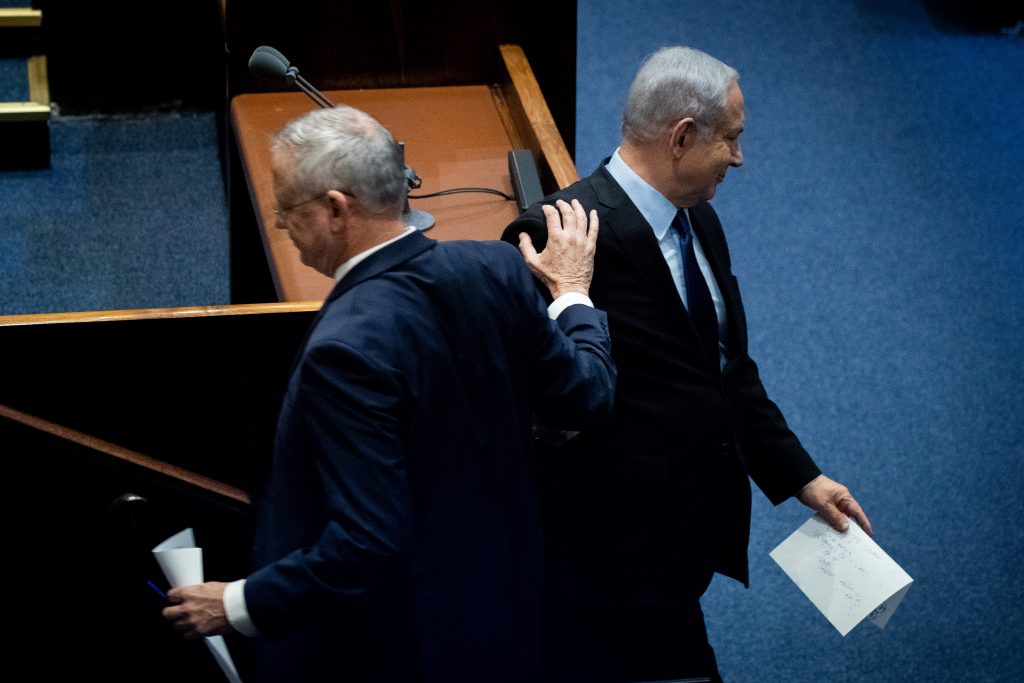 Prime Minister Binyamin Netanyahu and Blue and White leader Benny Gantz were nearing a deal on Tuesday to form a national emergency government to battle the coronavirus crisis and end the country’s unprecedented political deadlock.

Gantz’s 28-day mandate to put together a ruling coalition after last month’s inconclusive election was due to expire at midnight, but President Reuven Rivlin extended it for two days.

Rivlin did so, his office said, “on the understanding that they are very close to reaching an agreement.”

Gantz and Netanyahu met overnight Monday in a last-ditch effort to settle their differences. Afterwards they issued a joint statement saying they had made “significant progress.” The two are set to meet again with their negotiating teams later in the morning.

The impasse, after national elections in April and September 2019 and again last month, raised the prospect of a fourth ballot, complicating any plans for economic recovery once the coronavirus outbreak eases.

Without a deal, it will be up to parliament to pick a candidate who would then have 14 days to form a government. Failure to do so would automatically trigger a snap election.

“Netanyahu, this is our moment of truth. It’s either a national emergency government or, God forbid, a fourth election which would be expensive and, in this crisis period, gratuitous,” Gantz said late on Monday in broadcast remarks.

Gantz said the enormity of the coronavirus emergency had caused him to break a campaign promise not to sit in a government with Netanyahu.

In his own statement, Netanyahu said his cabinet could formulate an “exit strategy” as soon as this weekend, though he cautioned restrictions on the economy and education would be eased gradually and that there would be no full return to routine before a coronavirus vaccine is discovered.

A poll published late Monday on Channel 12 showed the Likud surging in support and easily securing him re-election.

Netanyahu , who currently enjoys the backing of 59 MKs, could also try to lure a pair of defectors to deliver him a majority in the Knesset and thus avert elections.

With the country led by a caretaker government and hobbled by legislative paralysis since the first election was called in late 2018, a fourth vote would extend the political crisis amid a global pandemic. It’s unclear how an election could take place with present-day stay-at-home orders.