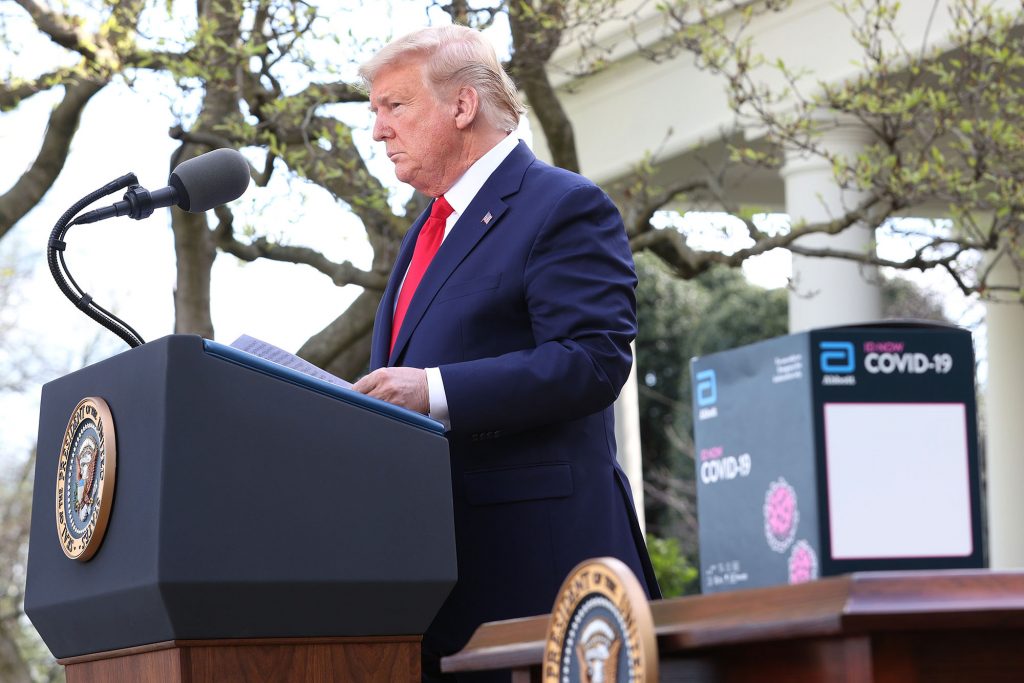 President Donald Trump’s top adviser on coronavirus testing said that by May the U.S. will be in the “ballpark” of the diagnostic capacity it needs, should the president decide to recommend parts of the country relax economy-crushing social distancing practices.

Adm. Brett Giroir said in an interview Saturday the U.S. is working on four forms of diagnostics it needs to reopen the economy: widespread surveillance to catch new flare-ups; testing of people who have specific symptoms; contact-tracing for confirmed cases; and antibody testing to know who’s recovered from the virus, which he said is weeks away.

“By May we’ll have a lot more testing than we do now,” Giroir said. “By May, we certainly will be in the ballpark. Whether we are exactly there depends on some factors, including how much is circulating and where regionally this falls out. That is the correct answer, I can’t give you a yes or no.”

Trump tapped Giroir, an assistant secretary at the Department of Health and Human Services, to accelerate U.S. testing for the virus last month. The government’s delays in fielding a functional test in January and February prevented containment of the outbreak when it first erupted, leaving public health authorities all but blind to the spread of the virus across the country for weeks.

While the U.S. has now tested more than 2.2 million people for the virus, fewer than 100,000 nationwide had been tested by March 19, less than a week after Giroir was appointed, according to the COVID-19 Tracking Project.

Anthony Fauci, director of the National Institute for Allergy and Infectious Diseases, who serves on Trump’s coronavirus task force, said last month that the shortage of testing was a “failing.”

The U.S. has now surpassed Italy in total deaths from the virus, making it the global epicenter. Even so, there are signs of optimism in hot spots such as New York that have Trump eyeing an easing of measures that have hundreds of millions of Americans in near-lockdown. Giroir said testing is ramping up and didn’t rule out a May reopening.

Testing is one factor as Trump weighs the “biggest decision” of his life — when to begin loosening economically punishing stay-at-home orders that have slowed the virus’s spread.

The president, who has said he won’t let the “cure” for the coronavirus pandemic be worse than the problem itself, said Friday he’ll announce an “opening our country” council on Tuesday to guide any reopening.

Trump is anxious to reopen “at the earliest responsible moment,” Vice President Mike Pence has said. Hopes to return American life to normal by Easter Sunday were abandoned on March 30 on the advice of Trump’s infectious disease experts. The current advisory runs until the end of this month, setting up a momentous decision for May 1.

The president has touted total testing numbers as a mark of success, but shortages of COVID-19 tests remain a problem.

Trump’s health secretary appointed Giroir, who serves as an assistant secretary for health, on March 13 to marshal more widespread testing capacity. Testing has so far been aimed at particular groups, such as health care workers and nursing home residents, who are among the most at risk from the virus.

Giroir said the administration is discussing adding minority groups to the priority list, as they’re more likely to have conditions that raise the chances of the virus being fatal. That trend has been seen in cities including Chicago, Detroit, New Orleans and Washington, D.C.

“We are considering expanding that group. That’s an active discussion,” he said. It’s especially so because some minorities may not know they have health conditions that put them at higher risk, he added.

“My opinion is we probably need to be more explicit about minorities being a high priority, because they may not know they have hypertension or diabetes or other things,” he said.

Giroir described the wide range of testing that would help track the disease’s spread if social distancing guidelines are rolled back in some or all of the country.

The first type of necessary testing is baseline surveillance, which he likened to a radar system, “to see what’s circulating where.” This would require hundreds of thousands of tests monthly, including of people with no symptoms.

A second batch will be testing people with symptoms. This would require millions of tests per month, because you want five or ten tests conducted for every positive one, he said. “Somewhere between 10 and 20% is probably a sweet-spot number to know that you’re oversampling the population,” Giroir said, referring to test positivity rate.

Authorities will also need to do contract-trace testing — on average, testing five people per confirmed case.

In total, “you’re talking about millions of tests per month — more than we’re doing now, particularly when you open up the country and have active surveillance and active track-and-trace, but certainly within the realm of what we believe is going to be industrially possible,” he said.

The U.S. is also racing to develop antibody testing, with laboratory tests ongoing at the U.S. Centers for Disease Control and Prevention. The goal is a finger-stick blood test that will signal who has had the virus. “That will be available in the course of weeks,” Giroir said.

“Once we are, this will give some information about who has had the virus and is presumably immune,” he said, cautioning: “Just having an antibody does not absolutely guarantee that you’re immune to getting this again.”

Pence has touted the looming availability of the antibody test. “When validated, we’re confident that the production will scale up to tens of millions of tests very quickly,” Trump said Friday.

Trump has taken particular interest in a new rapid test by Abbott Laboratories, which delivers results in as little as five minutes. The president took an Abbott test himself.

The company, which unveiled the device in late March, already has 18,000 toaster-sized testing machines in use and is shipping 50,000 tests a day. “We expect the production of that to double,” Giroir said.

The U.S. continues to have spot shortages of swabs, the small sticks used to collect medical samples, including for COVID-19 testing. This week it will receive a shipment of 1.75 million swabs to distribute, Giroir said. “We are making sure that the public health labs are completely flush in swabs, we are making sure that the community based testing sites are flush in swabs,” he said.

There are other hurdles to reopening. Pence has stressed the need to see major communities coming down off their caseload peaks, as well as the development of therapeutics and the issuance of guidelines for businesses to open. CDC Director Robert Redfield has said the U.S. will also need to convince Americans that it’s safe to begin to ease restrictions.

The U.S. is, in effect, signaling a targeted approach in lieu of widespread, across-the-board testing for anyone that wants it.

“That is physically impossible and it’s a poor strategy, because testing negative one day doesn’t mean you wouldn’t be positive the next day,” Giroir said. “So, testing everyone is not a strategy.”