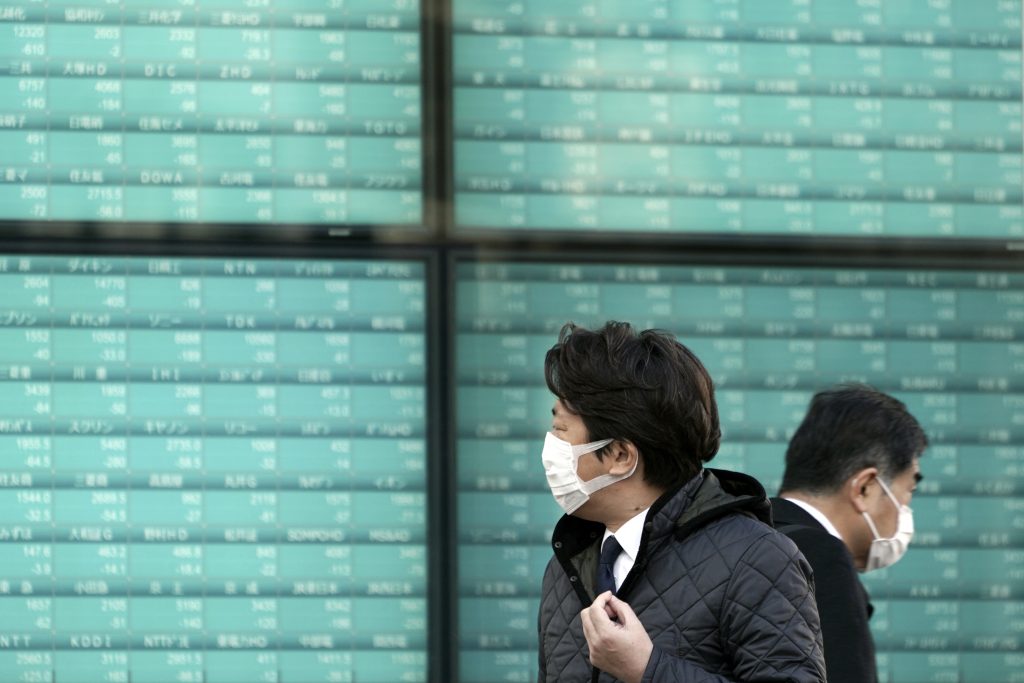 Asian shares rose Tuesday, echoing the rally on Wall Street, amid a few glimmers of hope that the coronavirus pandemic could be slowing.

China on Tuesday reported no new deaths from the coronarivus over the past 24 hours and had 32 new cases, all from people who returned from overseas. The country that gave rise to the global pandemic has recorded 3,331 deaths and 81,740 total cases. Numbers of daily new deaths have been hovering in the single digits for weeks, hitting just one on several occasions.

The number of new coronavirus cases is dropping in the European hotspots of Italy and Spain. The center of the U.S. outbreak, New York, also reported its number of daily deaths has been effectively flat for two days. Even though the U.S. is still bracing for a surge of deaths due to COVID-19 and New York’s governor said restrictions should stay in place to slow its spread, the encouraging signs were enough to launch the S&P 500 to its best day in nearly two weeks.

Investors have been waiting anxiously for signs that the rate of new infections may be hitting its peak, which would give some clarity about how long the upcoming recession will last and how deep it will be. Without that, markets have been guessing about how long businesses will remain shut down, companies will lay off workers and flights remain canceled due to measures meant to slow the speed of the outbreak.

“The virus is not everything, it’s the only thing, and nothing else really matters” to the markets, Frederick said, particularly in a week that is relatively light on economic reports.

The S&P 500 climbed 175.03, or 7%, to 2,663.68, and nearly all the stocks in the index were higher. It more than recovered all its losses from the prior week, when the government reported a record number of layoffs sweeping the economy.

The latest gains are not likely to have much staying power, given how much uncertainty remains about when the pandemic will subside significantly and how much harm will have been inflicted to the economy, said Nela Richardson, investment strategist at Edward Jones.

“It’s not unusual, if you look back historically, within bear markets to have rallies,” Richardson said. “I wouldn’t take the uptick over the last two weeks as a sign of a bottoming or a sign of upside recovery from here on out. There’s still a lot of uncertainty to get through even as we’re hopefully nearing the peak in terms of new coronavirus cases.”

The S&P 500 is still down more than 21% since its record set in February, but the losses have been slowing since Washington promised massive amounts of aid to prop up the economy.

“Since this is a public health crisis, the response has been extreme,” Morgan Stanley strategists wrote in a report. “There are literally no governors on the amount of monetary or fiscal stimulus that will be used in this fight.”

Japan is set to announce a 108 trillion yen ($1 trillion) package to support the world’s third-largest economy, including cash handouts to needy families and help for small businesses.