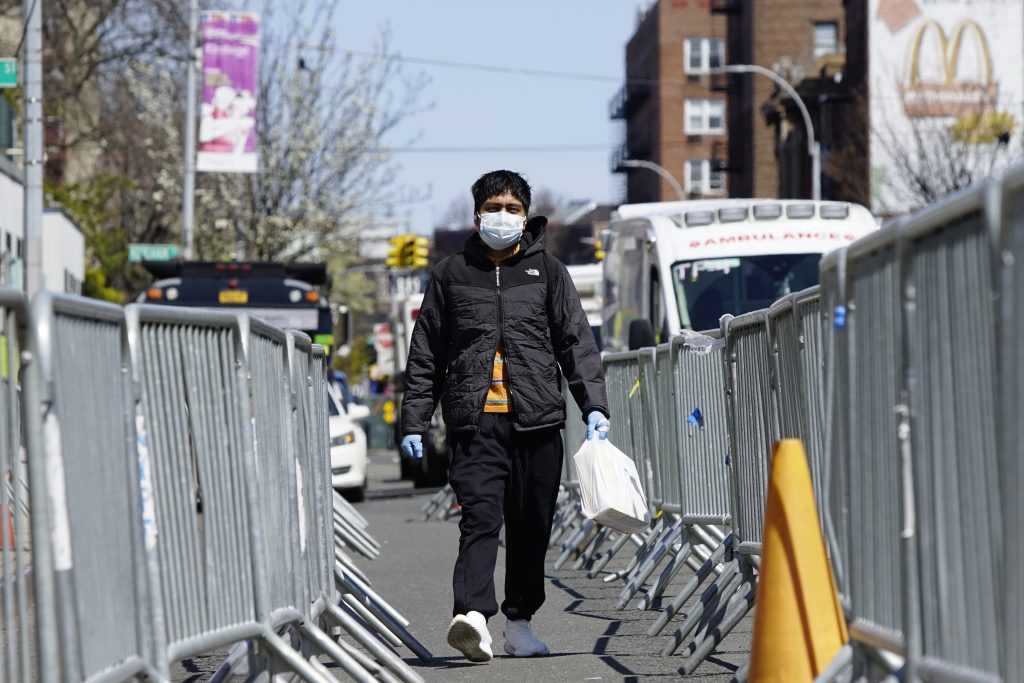 New York Gov. Andrew Cuomo extended stay-at-home restrictions to April 29 and increased fines on violators to up to $1,000, citing fresh evidence Monday that the outbreak-fighting rules could be helping the state avoid a worst-case catastrophe.

New York state has tallied 4,758 deaths from COVID-19, with 599 reported in the last 24 hours. It remains the most impacted state with more than 130,000 laboratory-confirmed cases and close to 17,000 people hospitalized.

But the number of new people entering hospitals daily has dropped, as have the number of critically ill patients requiring ventilators. Recent data suggests the state could be at or near the peak of the outbreak, state officials said.

Warning that this is no time to relent, Cuomo said schools and nonessential businesses will remain closed until April 29. He said the maximum fine for violations of state social-distancing protocol will soon be $1,000, up from $500.

“We underestimate this virus at our own peril. We’ve learned that lesson,” Cuomo told a news briefing at the state Capitol. “Now is not the time to slack off on what we’re doing.”

Cuomo stressed that even if New York has reached the peak, numbers could persist at these levels, which would continue to stress struggling hospitals.

Most New York state residents say they are either quarantining themselves or social-distancing, according to a poll released Monday.

And 4% said they were going about life as usual.

The statewide poll was conducted March 30 to April 2. Pollsters randomly called 402 adults and drew 400 responses from a proprietary panel.

The poll also found most New Yorkers with health and financial concerns.

An emergency field hospital is under construction at a park in the Bronx as New York City races to add hospital beds.

The Federal Emergency Management Agency confirmed Monday that a 200-bed facility to treat COVID-19-positive patients will be set up in Van Cortlandt Park.

The 12-acre site will be up and running in about three weeks, City Councilman Andrew Cohen told the Daily News.

New York state is scrambling to roughly triple its hospital capacity as coronavirus cases surge. There is a coronavirus ward in tents in Central Park, and a makeshift hospital has been set up in the Javits Convention Center in Manhattan.

A VIEW FROM THE ZOO

Wildlife seems to have taken notice of the scarcity of people on New York’s streets, where pigeons can be seen strolling in shuttered playgrounds. Some Bronx Zoo animals, too, appear to have registered the absence of the usual crowds, director Jim Breheny says.

Taking a break from his desk recently for a walk in the closed park, “I went by the bears, and I said something to the bears, and just hearing me,” they looked up, he said. “They look at me now like it’s novel to see somebody.”

The zoo, closed since March 16, is contending with the startling finding that one of its tigers tested positive for the coronavirus, in what is believed to be the first known infection in an animal in the U.S. or a tiger anywhere. The 4-year-old Malayan tiger, named Nadia, and six other tigers and lions have had coughs and sometimes other symptoms but are expected to recover.

De Blasio says the city’s public hospital system has enough surgical gowns for this week, but some private hospitals and other facilities like nursing homes are running low.

Crye Precision, a design and manufacturing company, is making gowns with the help of women’s-wear brand Lafayette 148 and other sewing shops at the Navy Yard, the mayor said.

City officials project that more than 300,000 gowns will be produced by the end of the month by factories across the city.