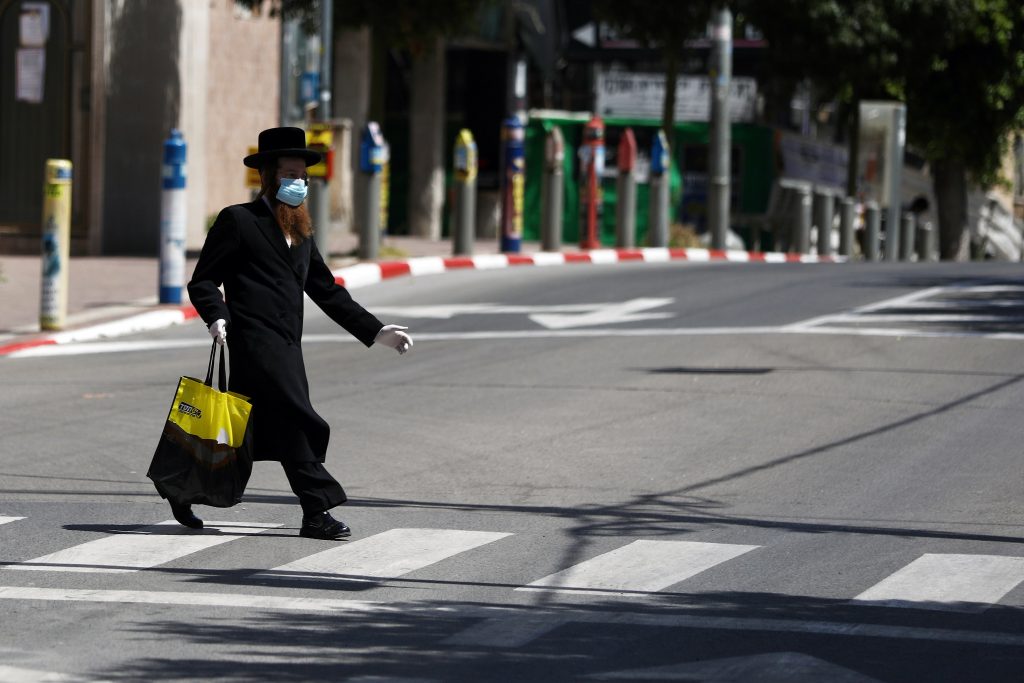 In particular, officials wanted to see how the IDF’s 98th Paratrooper Division was faring in its mission of providing supplies of food and medicine and evacuating the residents over the age of 80, who are most at risk in the pandemic.

Bennett said the IDF has so far delivered 12,000 hot meals to the city’s elderly population, to welfare recipients and to people who are otherwise unable to leave their apartments, according to The Times of Israel.

Kohavi, who was himself just released from self-quarantine, met with the commander of the 98th Division, Brig. Gen. Yaron Finkleman, and other officers, and observed some of the food distribution.

As if they had been parachuted into a foreign country, part of the soldiers’ special training for their mission was linguistic. They were equipped with a list of Yiddish words and phrases to help them communicate with residents who regularly speak the language, according to Army Radio.

Among the helpful terms on in the list are greetings such as “hello” (sholem-aleichem in Yiddish) and how are you (vos macht ir), as well as other phrases such as, “Does anyone here speak Hebrew” (iz ez do emets vos redt do ivrit) and “I’m sick” (ich bin krank).

Word (in any language) on progress of the planned evacuations was not immediately available.

Maj. Gen. (res.) Roni Numa, who’s heading the army’s coronavirus task force in Bnei Brak, told Yisrael Hayom the plan to remove thousands of elderly residents to a Defense Ministry-run hotel was not feasible, as it was more likely to spread the disease than protect the vulnerable population.

However, no official statement has been given out about a cancellation of the plan.

The city’s closure was ordered for seven days, with the option to be extended by ministers by five days at a time. Numa said he anticipates it will be several weeks before it will be safe to lift the closure.

While public transportation into or out of Bnei Brak was cut off, some buses continued to run inside the city. Transportation Minister Bezalel Smotrich said the measure was ordered by National Security Adviser Meir Ben Shabbat.

Within the city, residents live under the same restrictions as the rest of the country, allowing them to shop for food and medicine, but forbidding public gatherings, including minyanim, even in the street with social distancing.

As elsewhere in the country on Sunday, the streets are empty, including the main business center.

The Defense Ministry purchased 10,000 Seder products packages and 25,000 such packages for the rest of the festival. The packages contain matzah, kosher for Passover cookies, oil and other basic products, the Ministry said.

The IDF was reportedly setting up sites for burning chametz under military supervision to ensure social distancing.