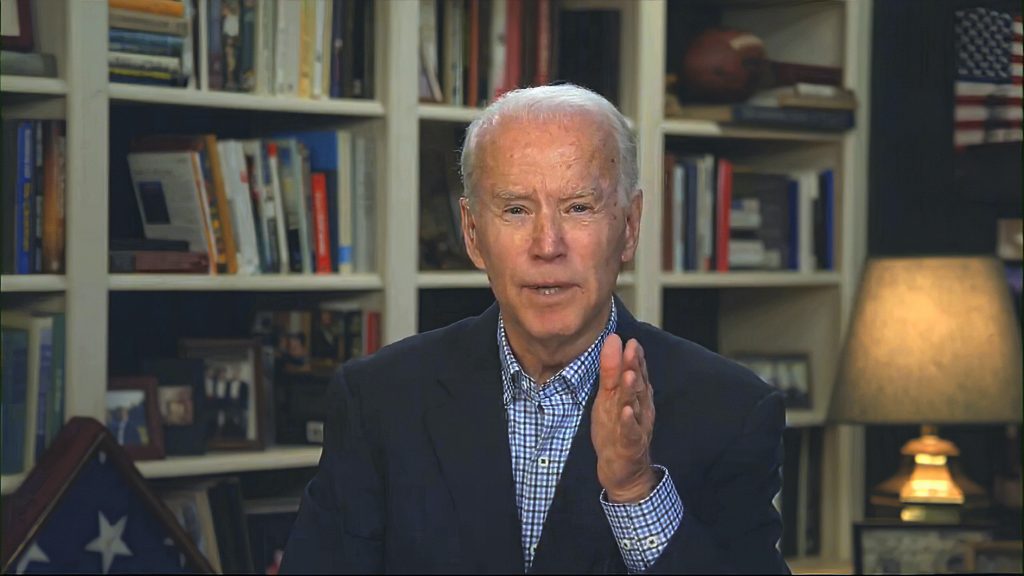 Dozens of influential donors gathered last week to hear from former vice president Joe Biden. But rather than mingling over cocktails at the home of a notable host, the guests signed on using a personalized link to a videoconferencing call – the default venue in the socially distant era.

It’s the new normal for Biden, whose fundraising has hit new roadblocks after sweeping victories in March’s primaries, as Americans have turned their focus to the coronavirus pandemic and its economic fallout, his fundraisers say.

Some of Biden’s donors point to the decision by a number of states to postpone primaries to June 2 because of the virus as one way he has been robbed of opportunities to build momentum and grab headlines.

“We’re all concerned, now that the primary is June 2, and no momentous thing happening like winning major primaries … to give him a boost, both in terms of media attention and delegates, until June,” said Alan Kessler, a longtime Biden donor and bundler.

But some of his allies fret that, even before the pandemic, Biden was far behind President Donald Trump, who has been raising money for the general election since 2017. They worry the current environment – which makes it impossible for Biden to hold intimate, in-person gatherings with wealthy donors, and in which Trump has much more visibility – may deepen his challenges.

Biden’s backers hope his name recognition and voter enthusiasm to oust President Trump will ultimately make up for any financial setbacks – and, they point out, Republicans face the same hurdles in raising money while the coronavirus remains a threat. Supporters note that the anti-Trump sentiments will ultimately rally the party, and its donors, around the eventual nominee, and Biden has a delegate lead to challenge Trump in the fall.

He posted his strongest monthly fundraising record in February, and aides say the campaign raised $33 million in the first two weeks of March, when donors consolidated around his candidacy after most of the other Democrats dropped out of the presidential race. Sen. Bernie Sanders, I-Vt., remains in the race and has a narrow path to the nomination.

“Joe Biden is driving huge voter turnout during this primary season, which has translated to a significant delegate lead and a strong fundraising uptick,” said Biden campaign spokesman TJ Ducklo. “Americans are craving the kind of steady, competent and compassionate leadership right now that Vice President Biden has modeled his entire career, and we’re seeing enormous energy and enthusiasm across the country – financially and otherwise – to bring that kind of leadership back to the White House.”

The appearance of asking for money during a global pandemic has been a particular complication for Biden, his backers say.

Some Democratic bundlers who were sitting on the sidelines were preparing to join Biden’s fundraising network following his big wins in March. But they are now hesitant, balking at the idea of soliciting money amid record unemployment and a quickly spreading disease.

“It’s very difficult,” said Ed Rendell, the former Pennsylvania governor and a top Biden fundraiser. “Some people almost actually get offended that you’re doing something as mundane as raising money for a political campaign when hundreds of Americans are dying each day.”

For example, a handful of Biden’s longtime donors sought to co-sign a donation appeal asking supporters to give the maximum $2,800 donation. They wagered that a jointly signed letter would seem more palatable than one carrying any single donor’s name.

But the donors could not agree on the letter’s language and missed the March 31 deadline, said one of the donors involved, who spoke on the condition of anonymity to discuss private fundraising matters.

The new dynamic also rewards the ability to raise funds online, which since the start of his campaign has been one of Biden’s biggest struggles. His online fundraising has improved drastically in recent months, but he still relies heavily on a network of wealthy donors he has known throughout his decades in public life.

Biden has tried to make up the lost ground – partly with a barrage of Facebook ads, where the campaign has been spending about $100,000 daily since Super Tuesday, that are soliciting new donors to his campaign – but even his allies concede he is far behind prolific small-dollar fundraisers like Sanders and Trump.

Elsewhere in the Democratic Party, there are concerns that the fundraising slowdown could hurt the party’s chances of maintaining its majority in the House and flipping control of the Senate.

Lesser known congressional candidates typically lack established donor bases enjoyed by longtime incumbents, who would give even without attending a fundraising event.

Meanwhile, Trump’s massive re-election fundraising has buoyed the party’s down-ballot candidates, who are able to tap into his fundraising earlier than Democrats can because of the legal advantages that the incumbent’s party enjoys, Democratic strategists say.

“The American people are seeing how well President Trump is responding to this crisis, and his bold leadership is helping our country weather this storm,” RNC spokeswoman Mandi Merritt said in a statement. “President Trump will emerge from this with a well-funded political apparatus, putting him in a stronger position than any Democrat candidate.”

Campaigns in both parties are scrambling to put together a fully virtual fundraising program, learning how to create an intimate and exclusive experience between candidates logging on from ad hoc studios in their homes and donors who give as much as $2,800 to sign in from theirs.

“We have a media cycle that is so dominated by this huge pandemic, we have candidates who just can’t travel to where donors tend to be concentrated. So they’re relying on virtual means of engagement, but it’s just tougher to break through,” said Swati Mylavarapu, former fundraising chair for Pete Buttigieg’s presidential campaign, who is investing in 64 down-ballot races.

Wealthy donors new to videoconferencing are struggling to adjust, unsure whether expectations of cocktail attire apply virtually and getting frustrated at the unflattering angles reflected on screen, longtime fundraisers from both parties said.

At a video conference initially scheduled to take place this week in Manhattan for Democracy Alliance, a network of wealthy liberal donors, nearly 500 people – mainly donors who contribute at least $200,000 each to certain liberal groups – tuned in to the conference for two hours per day over three days.

To keep attendees engaged in between discussions of how the pandemic was affecting voter engagement and turnout work, officials aired video messages filmed by Sens. Cory Booker of New Jersey and Charles Schumer of New York, and showed musical performances.

Some of Biden’s challenges have been technical. For instance, when the campaign held its first virtual fundraiser on March 20, it did not have the capability to answer donors’ questions.

Biden spoke for about 10 minutes at that event, sitting in front of a tall white bookcase with books and framed family photographs as the sound of a barking dog was occasionally heard in the background, according to the pool report.

Biden told donors he wanted to take questions but could not do that at the time, telling donors: “I promise I’ll get back to you, pick up the phone and call you directly or I’ll email you back,” the report read.

The events have markedly improved in recent days – he answered questions during fundraisers held on Thursday and Friday that, combined, attracted nearly 300 donors – and Biden’s interviews and private events have been running more smoothly, said Kessler, the longtime Biden donor, adding: “Hopefully, we’ll be seeing more of that.”