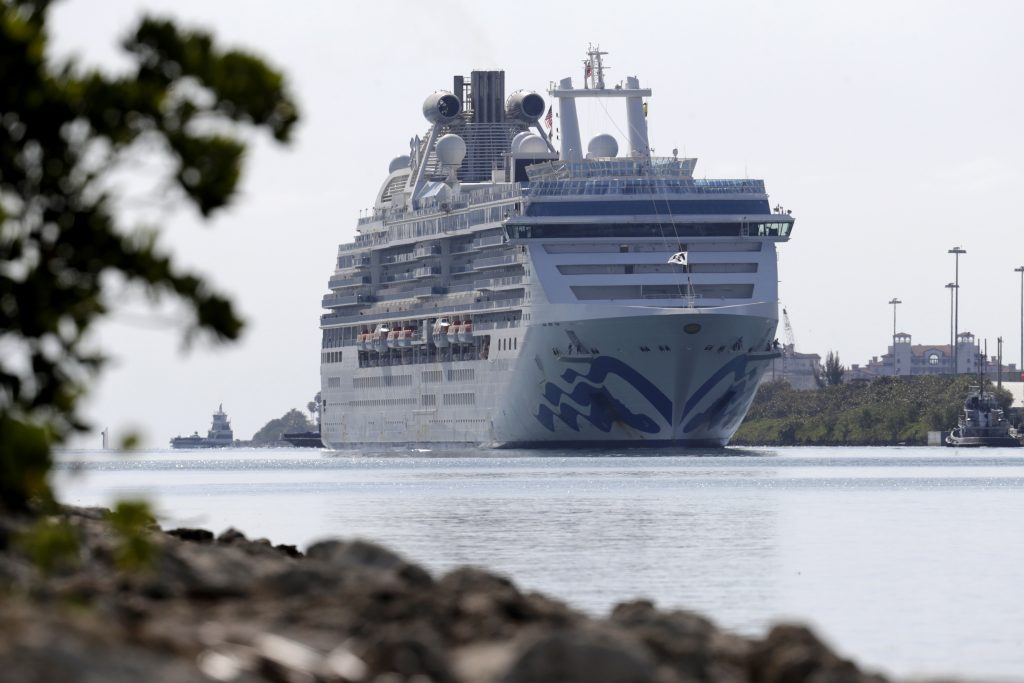 Another cruise ship with coronavirus victims on board, including two fatalities, docked in Florida on Saturday.

Princess Cruises spokeswoman Negin Kamali said in an email that the Coral Princess ship was docking in Miami. The ship with 1,020 passengers and 878 crew members had been in limbo for days awaiting permission to dock.

As of Thursday, Kamali said seven passengers and five crew members had tested positive for the coronavirus.

Anyone in need of hospitalization would disembark first, the cruise line said, although it wasn’t immediately clear when that would happen. Those who are fit to fly will begin leaving on Sunday, while others who have symptoms of respiratory illness will remain on board until cleared by ship doctors.

A day earlier, the cruise ships Zaandam and Rotterdam were permitted to dock at Port Everglades in Fort Lauderdale, with 14 critically ill people taken immediately to hospitals. The remaining passengers were slowly being allowed to board flights for home.

The Coral Princess had been on a South American cruise that was due to end March 19 in Buenos Aires. Since then, the ship has encountered obstacles to docking because of various port closures and cancellation of airline flights, the cruise line said.

Passengers have self-isolated in their staterooms and meals have been delivered by room service. Crew members also have remained in their quarters when they are not working.

The Coast Guard said in a news release Saturday it has been involved with processing about 120 vessels carrying some 250,000 passengers over the past three weeks because of the coronavirus pandemic.

The cruise line industry announced a voluntarily suspension of most ship operations from U.S. ports on March 13. The next day, the Centers for Disease Control and Prevention announced a “no sail” order to all cruise ships that had not suspended operations.

“We commend the decision by the cruise industry to cease operations. However, pausing a global tourist industry does not happen instantaneously or easily,” said Vice Admiral Dan Abel, Coast Guard Deputy Commandant for Operations. “The federal, state, local and industry cooperation to achieve this feat truly represents the whole-of-nation approach directed by the president and is essential to fighting the spread of this virus and working to minimize the loss of life.”