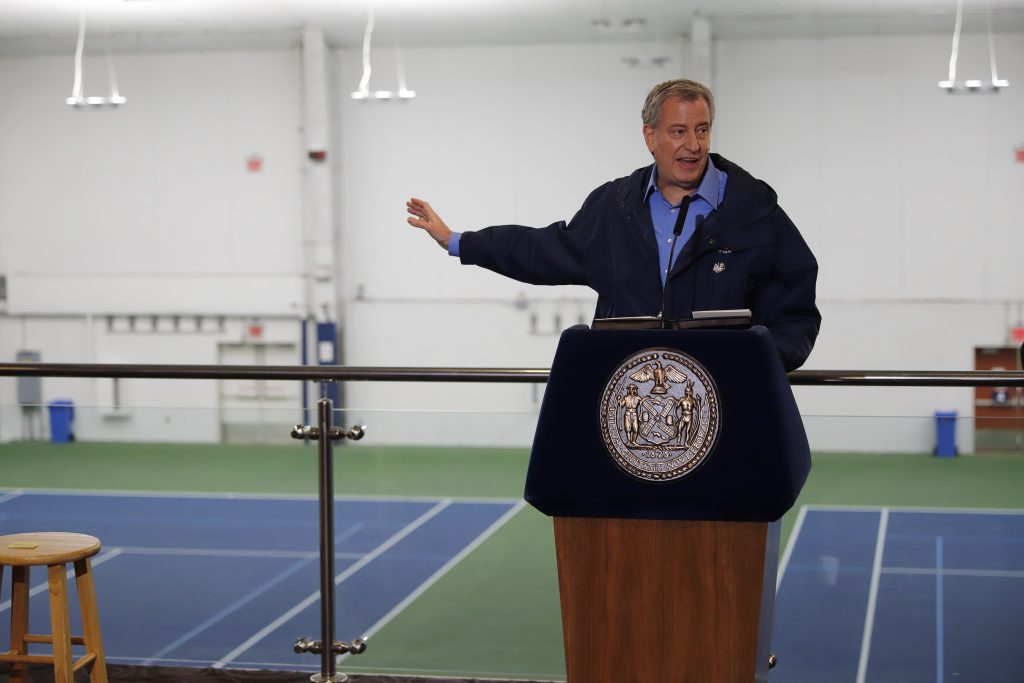 As coronavirus cases soared, New York City Mayor Bill De Blasio asked New Yorkers on Thursday to wear a face covering when they go outside to prevent the spread of the virus. Gov. Andrew Cuomo warned that the state’s supply of breathing machines could be exhausted in six days. And the COVID-19 death toll climbed to at least 2,400. While New York City remained a hotspot, there were troublesome trends around the state as the outbreak spread to every county. Unemployment filings skyrocketed too, as the pandemic wreaked economic havoc.

De Blasio asked New Yorkers to wear a face covering when they go outside and will be near other people.

He cited research showing asymptomatic people could be spreading the virus without realizing it.

“When you put on that face covering, you’re protecting everyone else,” he said.

The mayor said it could be a scarf or a bandanna or anything homemade, but it should not be a surgical mask needed by medical workers.

A recent study by researchers in Singapore became the latest to estimate that somewhere around 10% of new infections may be sparked by people who carry the virus but have not yet suffered symptoms.

A bandanna might not prevent someone from coming into contact with the virus, but it could help a person who has it not give it to others when they sneeze, cough or exhale.

Meanwhile, Cuomo warned that New York could be six days away from exhausting its supply of ventilators as the state reported 432 deaths in the past 24 hours, bringing the death toll to nearly 2,400.

More than 13,300 people were hospitalized statewide with about 3,400 in intensive care.

Ventilators have become the crucial piece of equipment sought by state and city officials as hundreds of patients a day are admitted to intensive care units.

The state sent 400 ventilators to New York City and another 200 to its suburbs. But the governor saw problems ahead.

“At the current burn rate, we have about six days of ventilators in our stockpile,” the governor said at a briefing at the Capitol.

If supplies run short, the state is ready to use anesthesia and converted BiPAP machines, usually used to treat sleep apnea, or put more than one patient on a single ventilator.

More than 92,000 state residents have tested positive for the coronavirus. The true number is likely much higher because officials have rationed tests and encouraged all but the most seriously ill people not to seek treatment and instead ride it out at home.

Most people who get the virus experience mild or moderate symptoms, including fever and cough. Others, though, develop pneumonia, sometimes requiring hospitalization. The risk of death is greater for older adults and people with other health problems.