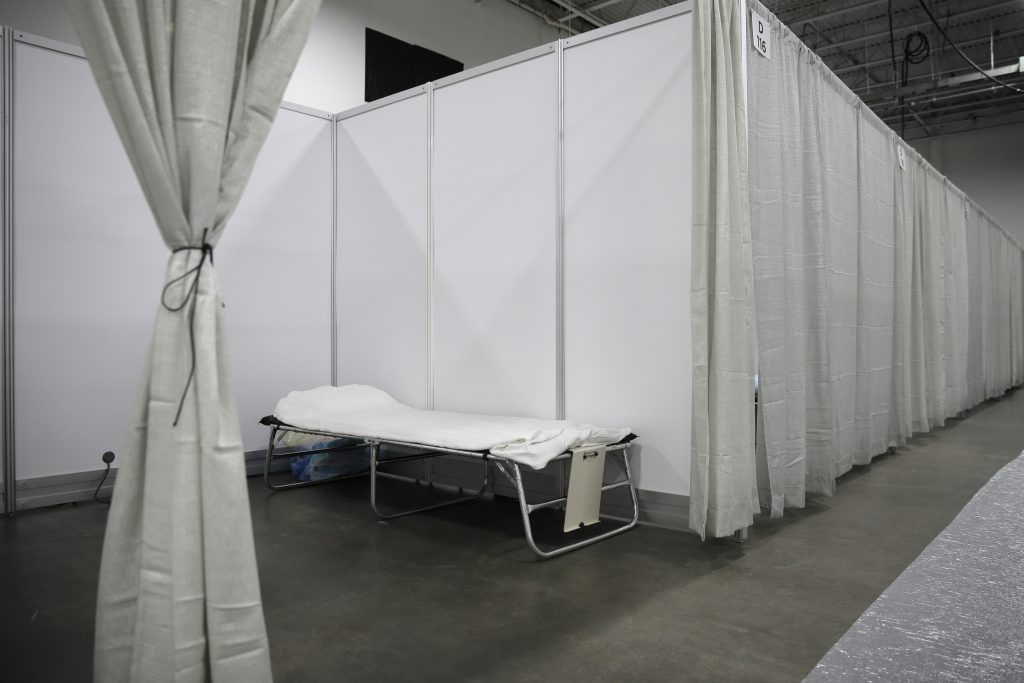 The jump stems from reporting delays as health care officials determine the cause of deaths, Murphy said. A surge of cases is hitting northern New Jersey, the hardest-hit part of the state so far, health officials have said.

The news came as the state reported a record number of unemployment claims and prepared to open its first field hospital in the Meadowlands.

The jump in claims is fueled by the coronavirus pandemic, according to state officials.

The new claims over the past two weeks dwarf the state’s previous record for jobless claims: In 2012, Superstorm Sandy led to a spike of 46,000 claims.

Nearly 156,000 residents are currently collecting unemployment benefits, about 51,000 more than the week before, according to the department.

Murphy on Thursday signed an executive order authorizing the state Director of Emergency Management, in consultation with the Department of Health, to use the governor’s authority under the Disaster Control Act to commandeer personal services and/or real or personal property. This includes medical supplies and equipment from private companies and institutions in order to help meet the continued need for ventilators and personal protective equipment across the state in hospitals, health-care facilities, and emergency response agencies.

“We must continue to take action to meet the critical medical needs of our hospitals and medical centers during this pandemic,” said Murphy. “While we look forward to these facilities cooperating in providing this equipment, this order gives the Office of Emergency Management the express authority to protect the public health, safety and welfare by ensuring that supplies go to where they are most needed.”

Compensation for such takings will be provided by the procedures established under the Disaster Control Act.

Murphy toured a 250-bed field hospital at the Meadowlands Exposition Center in Secaucus. The facility will open early next week, according to the governor.

The hospital is slated to field non-coronavirus cases. It’s one of four field hospitals that are supposed to open in New Jersey.

There will be two 250-bed facilities in Edison, with the fourth 250-bed field hospital in Atlantic City.

Murphy, appearing on CNN late Wednesday, said he thinks rigorous social distancing and the shuttering of many businesses will continue “deep into May.”

The first-term Democrat on March 21 ordered the state’s residents to stay home, after he earlier required the closure of casinos, gyms, theaters and restaurants and bars except for take-out or delivery.

Also shuttered are the state’s more than 600 school districts. It’s uncertain when they may reopen.

New York-area mass transit providers will receive more than $5 billion in aid from the federal government as they confront large revenue losses from the coronavirus pandemic.

The Federal Transit Administration on Thursday announced $25 billion it is awarding under the Coronavirus Aid, Relief, and Economic Security (CARES) Act. It included more than $5.4 billion for the New York metropolitan area including New Jersey and Connecticut.

The public vented about proposed toll increases on the Atlantic City Expressway during live-streamed public hearings amid the coronavirus pandemic on Wednesday.

The proposed hikes would pay for capital projects and would be financed by average toll increases of 57 cents at most, according to the South Jersey Transportation Authority, which operates the expressway. The authority is also considering automatic toll increases of at most 3% annually beginning in 2022.

Callers said they couldn’t afford such a significant price hike in light of current economic uncertainty. One person called the proposal a disgrace. A handful of callers said they were OK with the increase.