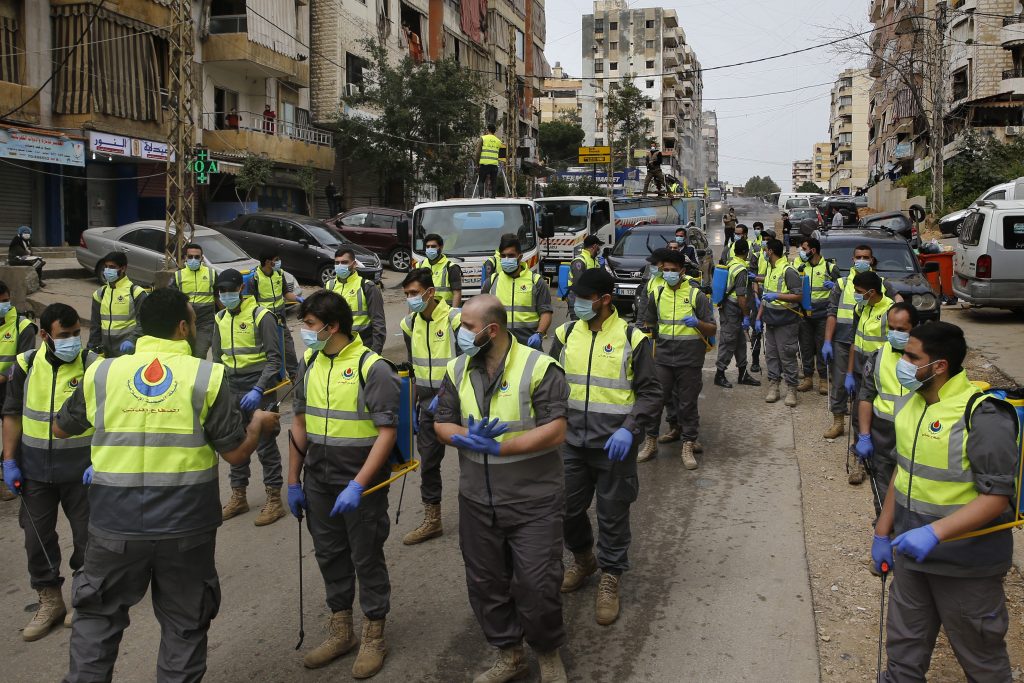 In the streets of Beirut’s southern suburbs, Hezbollah paramedics and volunteers on trucks and on foot sprayed disinfectants on shops and buildings. At a hospital where it once treated its wounded fighters, the terror group’s medical staff set up beds for a center to deal with coronavirus patients.

Hezbollah says it is turning the organizational might it once deployed to fight Israel or in the civil war in neighboring Syria to battle the spread of the virus pandemic in Lebanon.

It wants to send a clear message to its supporters in Lebanon’s Shiite community that it is a force to rely on in a crisis. The Iranian-backed group and political powerhouse is under pressure to send that message after a series of blows to its prestige.

Opponents have angrily accused Hezbollah of helping bring coronavirus to Lebanon. It took more than three weeks for the country to halt flights from Iran after a woman who had just returned from Iran emerged as Lebanon’s first confirmed case on Feb. 20. Critics claim Hezbollah was behind the delay, ostensibly to give its members and supporters time to return home, an accusation it denies.

Since then, Lebanon has recorded nearly 480 cases and 12 deaths.

“Until when are we going to remain the victims of Hezbollah’s bullying?” former Cabinet minister May Chidiac said in a tweet during the weeks before flights were stopped. “This is new proof they control the fate of the nation,” added Chidiac, who later tested positive for the virus after returning from Paris.

In the past few years, Hezbollah angered many in Lebanon for intervening in Syria’s civil war to back the Iranian-allied government in Damascus. During Lebanon’s wave of protests late last year, some protesters denounced Hezbollah as part of a ruling elite they wanted removed. The U.S. increased sanctions on the group, and Lebanon’s financial meltdown has left the government, dominated by Hezbollah and its allies, groping for solutions.

Hezbollah leader Sayyed Hassan Nasrallah has been giving regular speeches on the pandemic, a sign the group feels it must show it is stepping up.

“We should feel that we are in a battle and we should fight this battle,” he said in a recent hour-long speech.

The group has mobilized 24,500 members and volunteers for an anti-virus campaign aimed at helping the government and the Health Ministry, said Hashem Safieddine, a senior official in the group. The ministry is run by a minister chosen by Hezbollah.

During a tour for journalists in Dahiyeh, the densely-populated southern Beirut suburb that is Hezbollah’s stronghold, members of the group’s civil defense department, wearing uniforms, masks and gloves, sprayed streets. Volunteers delivered boxes of food to low-income residents.

At Saint George Hospital, which Hezbollah is turning into a center for coronavirus patients, staff members were setting up the first floor with new beds.

The campaign, heavily touted on Hezbollah’s Al-Manar network, is so far limited to its traditional areas of support.

In Lebanon’s fragmented, sectarian political scene, Sunnis and some Christians sharply oppose Hezbollah’s political power and ties to Iran. A few political factions from other sects have launched anti-virus programs, preparing clinics or passing out aid, but they can’t match Hezbollah’s funding and organization.