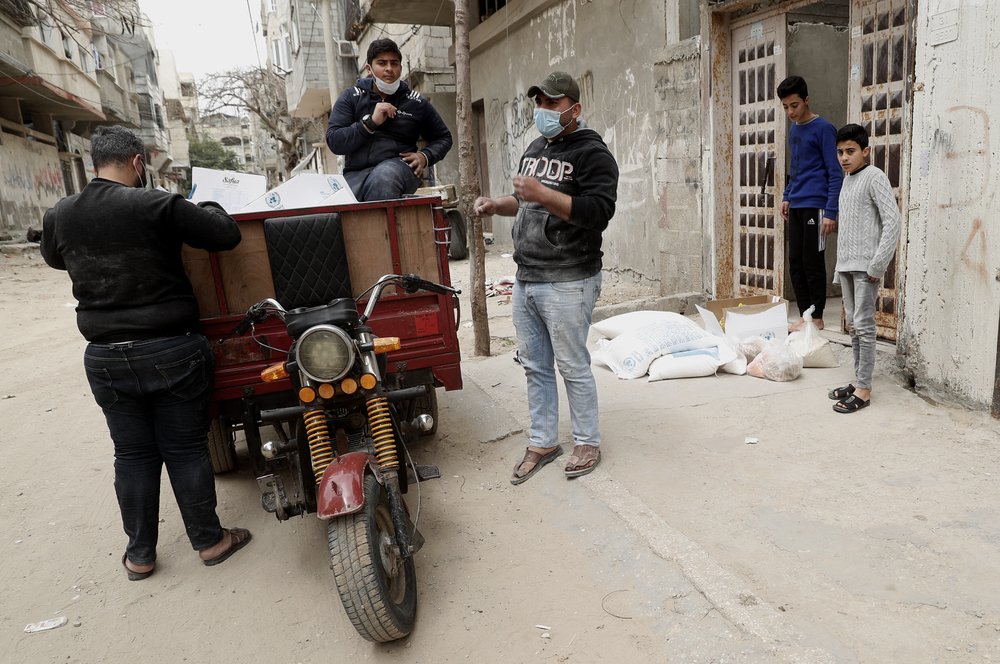 A U.N. aid agency has begun delivering food to the homes of Palestinians instead of making them pick up such parcels at crowded distribution centers — part of an attempt to prevent a mass outbreak of the new coronavirus in the densely populated Gaza Strip.

As the virus continued to spread across the Middle East, Iran, the hardest-hit country in the region, reported 141 new deaths, pushing the death toll closer to 3,000 people.

Late Tuesday, Gaza’s Health Ministry said two more cases have been confirmed among travelers who returned from Egypt, bringing the number to 12.

In Gaza, the U.N. Relief and Works Agency (UNRWA) for Palestinian refugees has for decades provided staples like flour, rice, oil and canned foods to roughly half of the territory’s 2 million people. Under the old system, those eligible lined up at crowded distribution centers four times a year to pick up their aid parcels. Starting on Tuesday, the agency began making home deliveries.

“We assessed that tens of thousands of people will pour into the food distribution centers and this is very dangerous,” said Adnan Abu Hasna, the agency’s spokesman in Gaza.

Some 4,000 deliveries were made Tuesday, with an estimated 70,000 others to be made over the next three weeks, he said. Drivers on three-wheel motorcycles dropped off the food, calling people out of their homes, confirming their identities and leaving the bags outside. The agency instructed people to stay at least 6 feet from the delivery men to minimize the risk of infection.

However, there’s only a small number of available test kits in Gaza. International officials fear the virus could quickly spread and overwhelm an already gutted health system.

In the Mideast generally, the United Nation’s Economic and Social Commission for Western Asia said on Tuesday that the pandemic will plunge 8.3 million people in the Arab countries into poverty, AFP reported.

ESCWA also warns that two million people could become undernourished as a result.

“With today’s estimates, a total of 101.4 million people in the region would be classified as poor, and 52 million as undernourished,” the U.N. agency says.

“Arab Governments must ensure a swift emergency response to protect their people from falling into poverty and food insecurity owing to the impact of COVID-19,” ESCWA executive secretary Rola Dashti says.