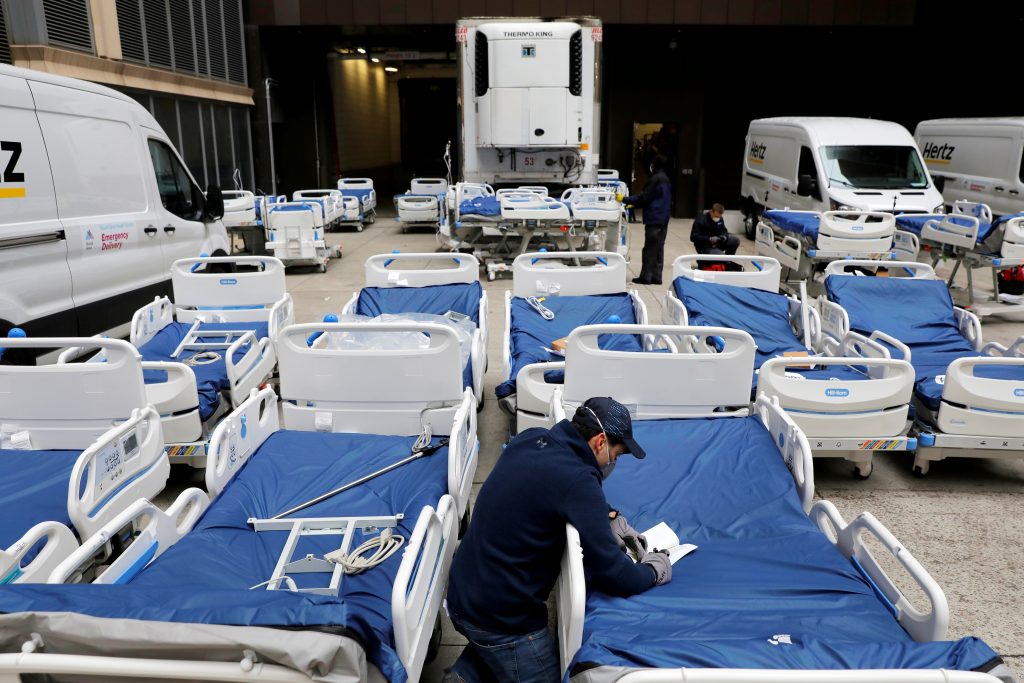 The U.S. death toll from the coronavirus climbed past 3,800 Tuesday, eclipsing China’s official count, as hard-hit New York City rushed to bring in more medical professionals and ambulances and parked refrigerated morgue trucks on the streets to collect the deceased.

Public-health experts at a briefing with President Donald Trump projected that the number of U.S. deaths could range from 100,000 to 240,000 even if Americans continue to stay home and limit contact with others. They said they hope the figure won’t soar that high if everyone does their part to prevent the virus from spreading.

“I want every American to be prepared for the hard days that lie ahead,” said Trump, who has extended social distancing guidelines to April 30. “We’re going to go through a very tough two weeks.”

Elsewhere around the world, hard-hit Italy reported that the infection rate appears to be leveling off and new cases could start declining, but that the crisis is far from over. Spain struggled to fend off the collapse of its hospital system. Vladimir Putin’s Russia moved to crack down on quarantine violations and “fake news” about the outbreak. And China edged closer to normal as stores in the epicenter city of Wuhan began reopening.

Worldwide, more than 850,000 people have been infected and over 42,000 have died, according to a tally kept by Johns Hopkins University. Italy and Spain accounted for half the deaths, while the U.S. had over 185,000 infections, with more dead than China’s official toll of about 3,300.

New York was the nation’s deadliest hot spot, with 1,550 deaths statewide, 1,096 of them in New York City, which braced for things to get much worse in the coming weeks.

“I’ve practiced emergency medicine for a long time, and I’m seeing things that I never could have imagined in terms of the things this virus can do to all ages, including people who were previously healthy,” he said.

The indoor tennis center that is the site of the U.S. Open tournament is being turned into a hospital as well.

The city also worked to bring in 250 out-of-town ambulances and 500 paramedics to deal with a crush of emergency calls. The fire commissioner said ambulances are responding to double their normal daily total of 3,000 calls to 911. A five-day stretch last week was the busiest in the history of the city’s emergency-services operation.

New York authorities also sought to bring on more volunteer health-care professionals and hoped to have them on board by Thursday. Nearly 80,000 former nurses, doctors and others are said to be stepping forward, and the governor said officials are doing background checks and otherwise making sure they are fit for duty.

Around the city, workers in protective gear have been seen putting bodies of victims into refrigerated trailers. At some hospitals, like Lenox Hill in Manhattan, the trucks are parked on streets, along sidewalks and in front of apartments. Cars and buses passed by as corpses were loaded by forklift at Brooklyn Hospital Center. People captured some of the scenes by cellphone.

“Nobody can even believe it,” Trump said about watching video footage from Elmhurst hospital in New York. “I watched the doctors and the nurses walking into that hospital this morning. It’s like military people going into battle, going into war.”

The crisis hit close to home for Gov. Andrew Cuomo, who reported that his brother, CNN anchor Chris Cuomo, 49, was infected.

Chris Cuomo tweeted that he has suffered from fever, chills and shortness of breath and will be doing his shows from his basement, where he has quarantined.

“Luckily we caught it early enough,” Gov. Cuomo said. “But it’s my family, it’s your family, it’s all of our families. But this virus is that insidious, and we must keep that all in mind.”

Figures on deaths and infections around the world are supplied by government health authorities and compiled by Johns Hopkins.

But the numbers are regarded with skepticism by public health experts because of different counting practices, a lack of testing in places, the numerous mild cases that have been missed, and perhaps government efforts to downplay the severity of the crisis.

For example, in Italy, where the death toll was put at about 12,400, the country’s emergency coordinator, Domenico Arcuri, acknowledged that officials don’t have a handle on how many people are dying at home or in nursing homes.

Still, there was a glimmer of hope there: Dr. Silvio Brusaferro, head of Italy’s institutes of health, said that three weeks into a nationwide lockdown, the hardest-hit country in Europe is seeing the rate of new infections level off.

“The curve suggests we are at the plateau,” he said. But “arriving at the plateau doesn’t mean we have conquered the peak and we’re done. It means now we should start to see the decline if we continue to place maximum attention on what we do every day.”

With the country’s health-care system buckling under the pressure, a field hospital, built in just 10 days, was unveiled at the Milan fairgrounds.

“We made a promise and we kept it,” said the head of the project, former civil protection chief Guido Bertolaso, who ended up catching the virus while on the job and had to work from his hospital bed.

In Russia, lawmakers approved harsher punishments, including prison sentences of several years, for violating quarantine rules and spreading misinformation. The chief doctor at Moscow’s top hospital for coronavirus patients said he tested positive, a week after shaking hands with Putin.

Spain reported more than 840 new deaths, pushing the toll above 8,000 and forcing Madrid to open a second temporary morgue after an ice rink pressed into service last week became overwhelmed.

Dozens of hotels across Spain have been turned into recovery rooms, and authorities are building field hospitals in sports centers, libraries and exhibition halls.

Israel’s Defense Ministry said it has converted a missile-production facility into an assembly line for ventilators.

In the hot spot of Louisiana, the death toll climbed to 239. And Tony Spell, a pastor charged with a misdemeanor for holding six church services in violation of the governor’s ban on public gatherings, said he would continue to defy the law.

Louisiana and Michigan were running out of ventilators, despite promises by the White House of more equipment.

Louisiana’s governor said the hard-hit New Orleans region is on track to run out of breathing machines by the weekend and hospital beds a week later. The Trump administration has committed to sending 150 ventilators from the national stockpile, but the state hasn’t received an arrival date. Michigan said it needs 5,000 to 10,000 more.

Among the few positive signs: In Britain, where the number of dead reached nearly 1,800, the medical director of the National Health Service’s operations in England said there is evidence that social distancing is working. And China reported just one new death from the coronavirus and 48 new cases, all of them from overseas.