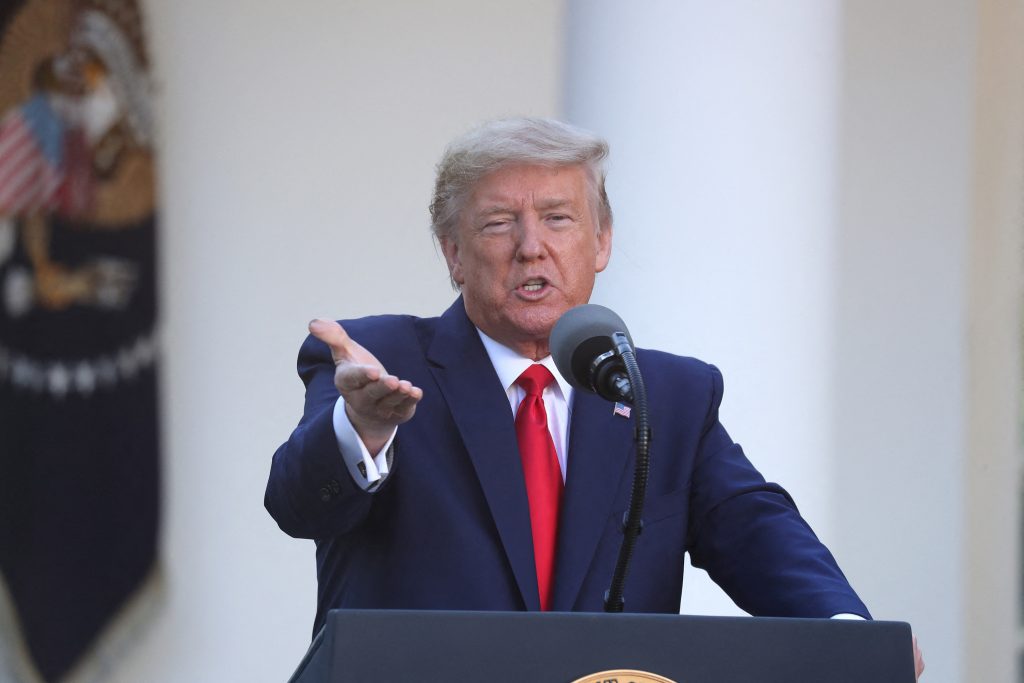 President Donald Trump on Tuesday joined a growing chorus of lawmakers and lobbyists proposing massive spending on infrastructure in the next coronavirus stimulus bill, calling for a $2 trillion investment. And his endorsement appeared to embrace borrowing to pay for it.

“With interest rates for the United States being at ZERO, this is the time to do our decades long awaited Infrastructure Bill,” Trump tweeted. “It should be VERY BIG & BOLD, Two Trillion Dollars, and be focused solely on jobs and rebuilding the once great infrastructure of our Country!”

House Ways and Means Committee Democrats followed with a tweet of their own noting the position of their chairman, Rep. Richard Neal, D-Mass.

“@RepRichardNeal supports infrastructure investments being part of the next coronavirus response legislation. Let’s get to work!”

That both Democrats and Republicans agree that there’s a need for massive infrastructure investment is nothing new — they agreed on that long before the coronavirus began spreading overseas. The question of how to pay for such an investment, though, has been a matter of rancorous debate, even within party caucuses.

But the urgent nature of the pandemic and an economy on life support has changed the nature of the debate, said Jim Tymon, executive director of the American Association of State Highway and Transportation Officials.

“You need to look holistically at what it means to stimulate the economy,” he said. “If you’re going to want to come out of the crisis and be ready to go out there and reinvigorate the economy, there’s a lot of benefit” to infrastructure investment, he said.

Spending on infrastructure “has the short-term benefit of putting people back to work quickly and the long term benefit of making improvements to the transportation network and we’ll have those benefits for years to come,” he said.

Kyle Pomerleau, a resident fellow at the American Enterprise Institute, said the pandemic has reordered priorities.

During an emergency as all-encompassing as the coronavirus, pay-fors aren’t as important as emerging from the crisis itself. “It would be kind of odd if you were talking about perfectly crafted pay-fors during this time,” he said.

But Pomerleau questioned whether the timing of a massive infrastructure spending is appropriate. Instead, he argued, the focus should be on “bridging the economy from now until the end of the pandemic.”

Only when the pandemic is over, he said, should the focus be on infrastructure spending.

John Gimigliano, principal-in-charge of federal tax legislative and regulatory services at the accounting firm KPMG, and a former House Ways and Means Committee senior tax counsel, said the next stimulus bill will be determined by the type of crisis the country is facing in early May, which is likely the earliest such legislation can come together.

“If what Congress concludes we need is economic stimulus because of the state of the economy in a month or so, then I think we’re looking at a different type of legislation than if it’s relief more for individuals,” Gimigliano said at a KPMG webinar Tuesday on the new tax legislation.

“So if we’re on this more stimulus side you could well see investment in things around infrastructure … which hopefully would get people to work.”

Before the pandemic, the biggest infrastructure battle seemed to be centered on whether to raise the federal gas tax to pay for infrastructure needs or to shift to a user fee model based on how many miles vehicles traveled.

The dispute held up any potential progress on fixing a Highway Trust Fund that has been borrowing from general revenues since 2008.

But the pandemic’s damage to the economy has minimized the debate over pay-fors, and virtually none of the debate over the $2 trillion Phase 3 stimulus that passed last week included hand-wringing over deficit spending.

And for good reason, said Ed Mortimer, vice president of transportation and infrastructure at the U.S. Chamber of Commerce.

“I can’t remember a time in history where we’ve shut down the nation’s economy,” said Mortimer.

Mortimer acknowledged that the debates over how to pay for infrastructure have moved to the back burner. But in the long run, he said, Congress will need to decide how to make the Highway Trust Fund sustain itself again.

The current slide in oil prices may make raising the gas tax, unchanged since 1993, more politically palatable, though the prior call to raise it five cents a year for five years “might be a bit aggressive,” he said.

“What we have always said at the Chamber is it’s going to be a combination of things,” he said. “The gas tax by itself was never going to be the full financial solution to an investment in infrastructure. But it is going to play a role.”

The current highway authorization will expire at the end of September, and Congress will either need to pass a new bill or extend the current bill in order to keep paying for federal highway programs.

Jeff Davis, a senior fellow at the Eno Center for Transportation, wrote in a March 13 blog that the debate will come down to whether to pay for current and increased spending or “just finance it through general fund deficit borrowing in the name of not making the recession worse.”

He suggested the current crisis might present an ideal time to give up on a highway trust fund that hasn’t paid for itself since 2008.

“Maybe the answer is just to give up on the highway user-pay charade, do a massive up-front bailout immediately, then write a reauthorization bill and get it enacted by September 30 to avoid the disruptive effect that funding uncertainty has on states,” he wrote.