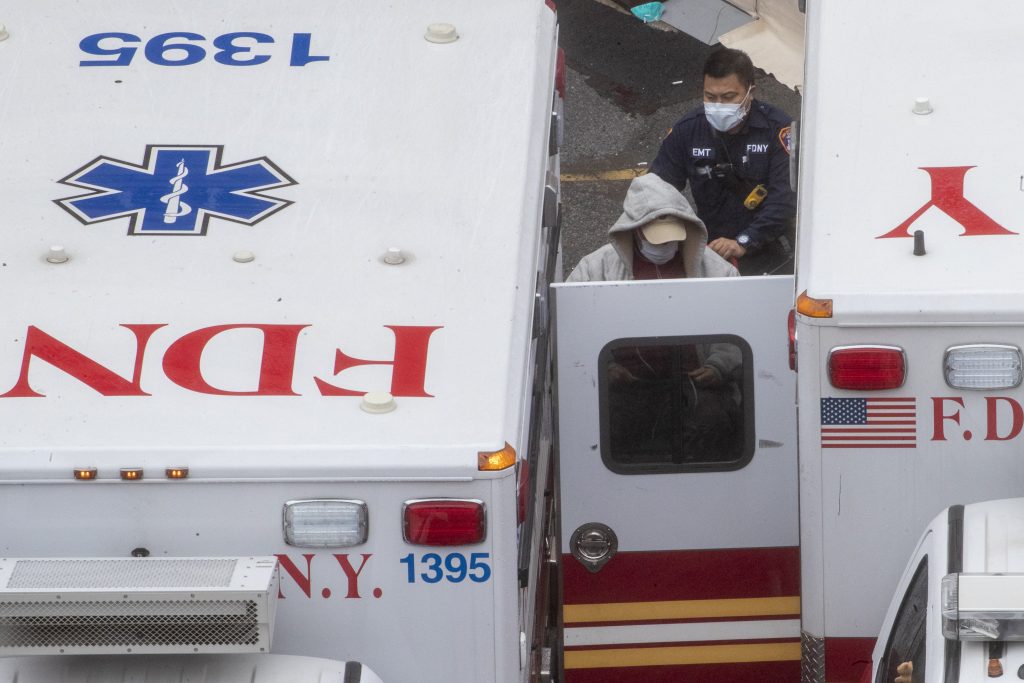 The state accounts for more than 40% of coronavirus deaths in the U.S.

The number of disease-related deaths in the state jumped Sunday to 965 from 728 the day before, Gov. Andrew Cuomo said. The vast majority have been in New York City. Figures released Sunday morning showed 32,308 cases and 678 deaths in the city, which continues to be the epicenter of the pandemic in the U.S.

Meanwhile, new data is showing which parts of the city are being hit the hardest by disease and that nearly a quarter of the people who’ve died of coronavirus in the state were nursing home residents.

Coronavirus is overwhelming some of New York City’s poorest neighborhoods, according to new data released by the city.

Queens accounts for 32% of the city’s more than 30,000 confirmed cases as of Saturday — more than any other borough.

Neighborhoods such as Jackson Heights, Elmhurst and Corona, which are generally poor, densely packed, and have large non-English speaking populations, have been among the hardest hit, according to a city map showing percent ranges of people testing positive for the disease, also known as COVID-19. In those areas, between 69% and 86% of the tests done have come back positive.

A hospital in Elmhurst has been overrun with coronavirus cases. One day last week, 13 hospital patients with the virus died.

Statistics on coronavirus cases do not reflect everyone who may have the virus, because many people have been told to manage their illness at home and are not getting tested.

On Saturday, after saying he was weighing the idea of a mandatory quarantine for New York, New Jersey and Connecticut, President Donald Trump tweeted that instead he’d issue an advisory urging people in those states to avoid any nonessential travel for two weeks.

New York City Mayor Bill de De Blasio said he worried about the advisory’s impact on families with members in New York and other places who were looking to reunite.

“We’ve got to respect, in the middle of a crisis, families have a right to be together,” Mayor de Blasio said.

All 50 U.S. states have reported some cases of the virus that causes COVID-19, but New York State has the most, with over 52,000 positive tests for the illness and more than 700 deaths. About 7,300 people were in New York hospitals Saturday, including about 1,800 in intensive care.

About 20% of coronavirus cases in New York City have led to hospitalizations, putting a strain on personnel and resources such as ventilators and protective gear.

Mayor Bill de Blasio reiterated his fears that without reinforcements, the city will run out of masks, gowns and other hospital supplies by next Sunday and ventilators sooner.

With the expected peak of cases in the city still two to three weeks away, de Blasio told CNN on Sunday that the city also needs new waves of doctors, nurses and other medical personnel.

Through Friday, 24% of coronavirus deaths in New York State were among nursing home residents, according to the state Department of Health figures released to The Associated Press.

The state said there were more than 740 confirmed COVID-19 positive cases in licensed nursing homes at 129 of the state’s 613 nursing homes, which serve more than 100,000 residents.

As of Friday, 122 nursing home residents in the state have died of the disease. In less than two weeks, the virus has claimed seven lives at one Long Island retirement community, with the latest death on Saturday.