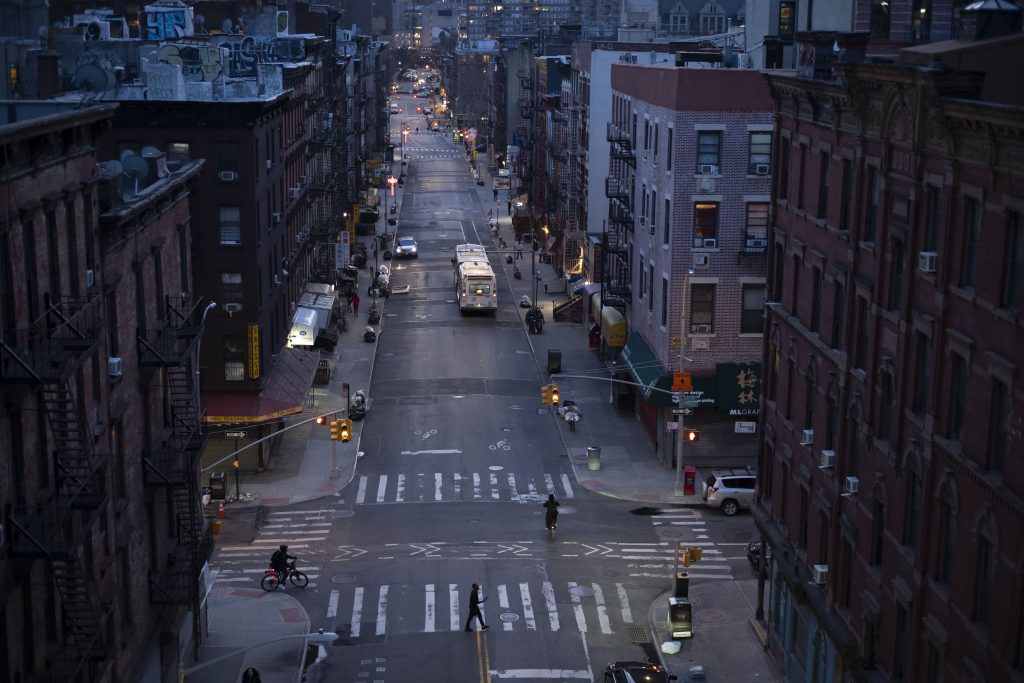 President Donald Trump and elected leaders in New York are clashing again over the depth of the state’s coronavirus crisis. Meanwhile, the outbreak is taking its toll on the state’s civil servants, with the virus claiming the lives of bus and train workers and a civilian employee of the New York Police Department.

There are more than 6,000 hospitalized COVID-19 patients in New York, with almost 1,600 in intensive care. New York has logged a nation-high of 519 deaths, and has more than 44,000 confirmed cases.

The state is seeking authorization from the Trump administration to add 4,000 beds in The Bronx, Brooklyn and Queens. The hospitals would be constructed at a horse track, a city college, an expo center and a cruise ship terminal.

The requested conversions are part of the state’s broader effort to quickly increase New York’s hospital capacity from 53,000 beds to up to 140,000 beds. The federal government is already constructing a hospital at a Manhattan convention center and a Navy hospital ship is due to arrive Monday in New York City, a global hotspot of the outbreak. New York City has 25,573 confirmed cases and 366 deaths.

“Were looking far and wide, very creative, aggressive and finding all the space that we can possibly find,” Cuomo said.

The state announced Friday that construction will no longer necessarily be considered an “essential business” that is allowed to remain open.

Updated guidance on the state website says, “All non-essential construction must shut down except emergency construction, (e.g. a project necessary to protect health and safety of the occupants, or to continue a project if it would be unsafe to allow to remain undone until it is safe to shut the site).”

Sites that have a single worker may remain open.

The complete updated guidance on “essential businesses” is available at https://esd.ny.gov/guidance-executive-order-2026

New York City’s Democratic mayor, Bill de Blasio, tangled with Trump again Friday after the Republican president expressed doubts about the depth of the crisis in the city’s hospital system and its urgent need for more breathing machines.

“When the president says the state of New York doesn’t need 30,000 ventilators, with all due respect to him, he’s not looking at the facts of this astronomical growth of this crisis,” de Blasio said on ABC.

The federal government has been sending ventilators to New York and more help is on the way, including a Navy hospital ship and temporary hospitals from the military and the Federal Emergency Management Agency.

“So we’ve gotten something. I’m thankful for that,” the Democratic mayor said. “But it has to keep coming.”

The coronavirus outbreak is taking its toll on New York City’s civil servants.

Two people who helped keep New York moving during the crisis, bus operator Oliver Cyrus, 61, and train conductor Peter Petrassi, 49, were killed by the virus Thursday, according to their union.

He called transit workers “true heroes” for continuing to work during the pandemic and he demanded that the Metropolitan Transportation Authority provide transportation workers with protective masks.

Fifty-year-old letter carrier Rakkhon Kim died Wednesday from COVID-19-related complications, according to the National Association of Letter Carriers. Kim had delivered mail for 23 years. He worked in the Bronx and lived in Northvale, New Jersey, according to the union.

Dickson worked for the department since 2006 and spent 17 straight days cleaning up police headquarters after Superstorm Sandy in 2012.

The department, even as it has been tasked with helping police New York’s social distancing rules, also continues to see a spike in absences. On Thursday, 3,674 officers called in sick, accounting for about 10% of the force. As of Thursday, 351 NYPD personnel had tested positive for the virus.