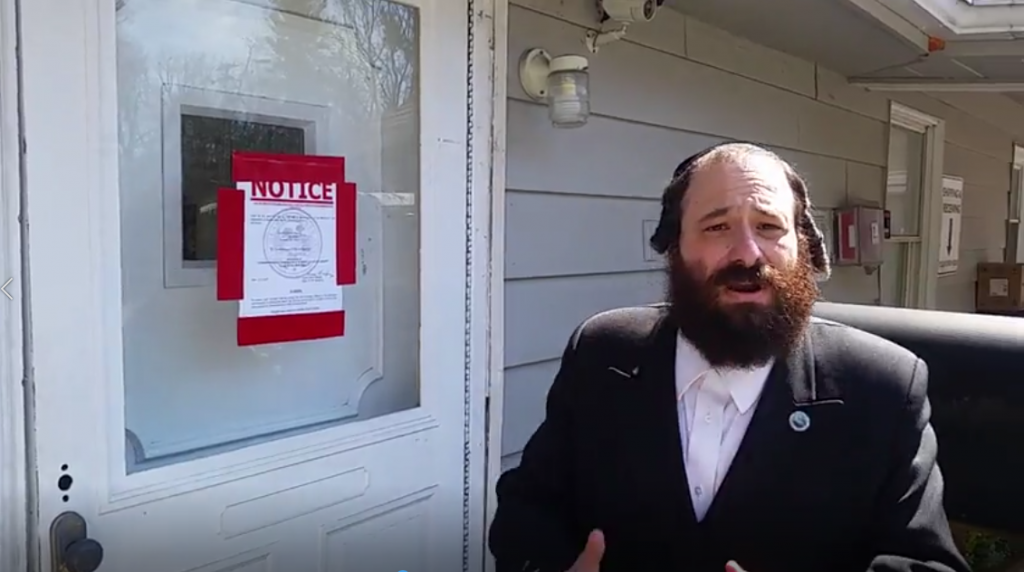 A Jewish school in Airmont, N.Y., received Commissioner’s Orders on Wednesday for non-compliance with emergency closure orders, but the school says it was merely distributing lunches to homebound students, as are many schools across the state.

Rockland County Executive Ed Day wrote on social media that he was alerted to possible violations at the school, located at 236 Cherry Lane, by social media messages. The school for young children is in the UTA Central network (the Satmar community under the leadership of the Satmar Rebbe Harav Aaron Teitelbaum, shlita).

“Our inspectors responded and allege based on an exterior inspection there were numerous adults and children outside in front of what appeared to be the main building and children being picked up by what appeared to be their parents or other adults in cars,” Day wrote. “There was a steady stream of cars arriving and leaving with elementary school age children (boys and girls). This is the type of egregious behavior that, because some people feel that they do not wish to be inconvenienced during a crisis where all are being impacted, coupled with an administration of a facility that flouts the law, not only creates animosity in our community but risks lives. Do these adults not recognize that this type of activity not only risks the health of their children but also the lives of others in the home they return to, particularly if grandma or grandpa are there? This location was posted with Health Commissioner Orders and fines of $2000 per day of violation will be levied.”

The Commissioner’s Order is a final warning before a fine is levied.

But the school says it was merely handing out lunches in the parking lot, which were being picked up by parents with children in the car.

In a letter to the Rockland County Health Department, UTA Central attorney Robert S. Rosborough says that Central UTA has had a few staff members on site “to prepare and then distribute instructional materials for at-home learning and meals for children that the school has been distributing to its students’ homes during this period.” The emergency order earlier this month signed by Gov. Andrew Cuomo specifically says that schools should “plan for alternative instructional options, distribution and availability of meals, and child care, with an emphasis on serving children of parents in the health care profession or first responders who are critical to the response effort.”

In response to social-media commenters who said the school was only distributing food, Day wrote, “I specifically told our enforcement people that food and assignment pick up was allowable and be sure it was not that. They determined it was not. The matter will go forward to a hearing.”

Rockland County Legislator Aron Wieder, as well as a UTA Central official who asked to remain anonymous, told Hamodia that school officials on the premises say the Heath Department inspectors did not discuss the matter with officials to determine why people were at the school, but simply slapped the Commissioner orders on the door.

A spokesman for Day told Hamodia, “Inspectors always speak to those on site, identify themselves and ask to speak to an administrator or whoever is in charge.”

“The Ramapo police has found no evidence of school being in session at the private school on Cherry Lane, and it is our complete understanding at this point in time, that the Rockland County Department of Health has not found the school to be in session either,” Weidel said.

The UTA Central attorneys are requesting that the Health Department “immediately rescind the above-referenced order that was issued in error, and remove the notice that has been posted on Central UTA’s property.”

Many in the Rockland County Orthodox community, including Wieder, have long accused Day and others in the county government of anti-Semitism. This UTA Central school is in fact currently in litigation with the county over a certificate of occupancy issue.

“I think it’s about time for either the state government or federal government to come and take over Rockland County before it’s going to become extremely difficult for Jews to live here, with this type of county government,” Wieder told Hamodia on Thursday, adding, “I encourage the school to continue to distribute the food for the children and they should not be intimated by this terrible county executive.”