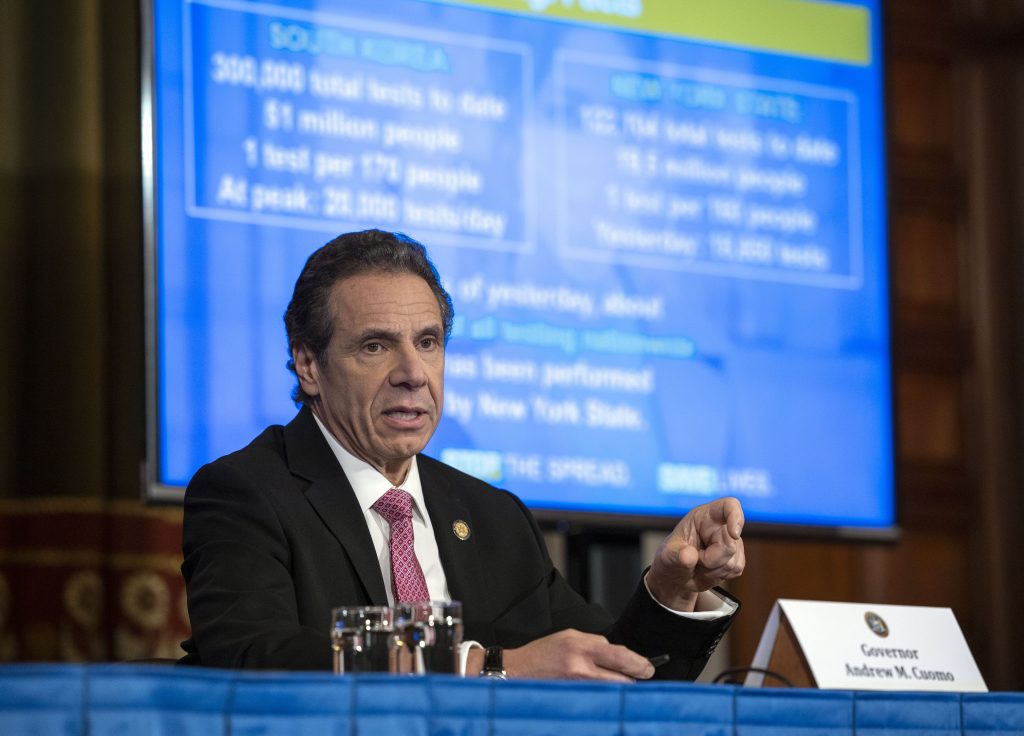 Gov. Andrew Cuomo said the economic toll of the coronavirus outbreak will be dramatic in New York and castigated federal officials for what he called a failure to address lost revenue in their $2.2 trillion relief package.

“The Congressional action, in my opinion, simply failed to address the governmental need,” he said Thursday at a state Capitol news conference. “I find it irresponsible. I find it reckless.”

Gov. Cuomo said the outbreak creates a “double whammy” of increased state costs and lost revenue as businesses shutter and workers are laid off. The governor said the state will have to adjust its budget plan for the fiscal year beginning April 1 because revenue figures are so uncertain.

While the relief plan before Congress would send $5 billion for COVID-19-related expenses, Cuomo said the larger issue is lost revenue.

New York state’s death toll from the coronavirus jumped by 100 in one day, pushing the number to 385, Gov. Andrew Cuomo said Thursday. He added that experts expect the number to increase as critically ill patients who have been on ventilators for several days succumb to the virus.

“That is a situation where people just deteriorate over time,” Cuomo said. “And that is what we’re seeing.”

Cuomo said at least 122,000 people in the state have been tested for the virus and there have been more than 37,200 confirmed cases.

He said more than 5,300 COVID-19 patients were hospitalized statewide as of Thursday, with nearly 1,300 of them in intensive care.

A health-care worker at one of the New York City hospitals under siege by the coronavirus has died, according to coworkers and his sister.

Kious Kelly, an assistant nurse manager at the Mount Sinai West hospital in Manhattan, died Tuesday from the virus after he got sick two weeks ago, multiple friends said in social media posts.

“This growing crisis is not abating and has already devastated hundreds of families in New York and turned our frontline professionals into true American heroes,” the hospital system said in a statement. “Today, we lost another hero — a compassionate colleague, friend and selfless caregiver.”

Kelly’s sister, Marya Sherron, told the New York Post that her brother had informed her of his illness about 10 days earlier.

“He told me he had the coronavirus,” she said. “He was in ICU but he thought he was OK. He didn’t think it was serious as it was.”

Sherron said Kelly had severe asthma but was otherwise healthy.