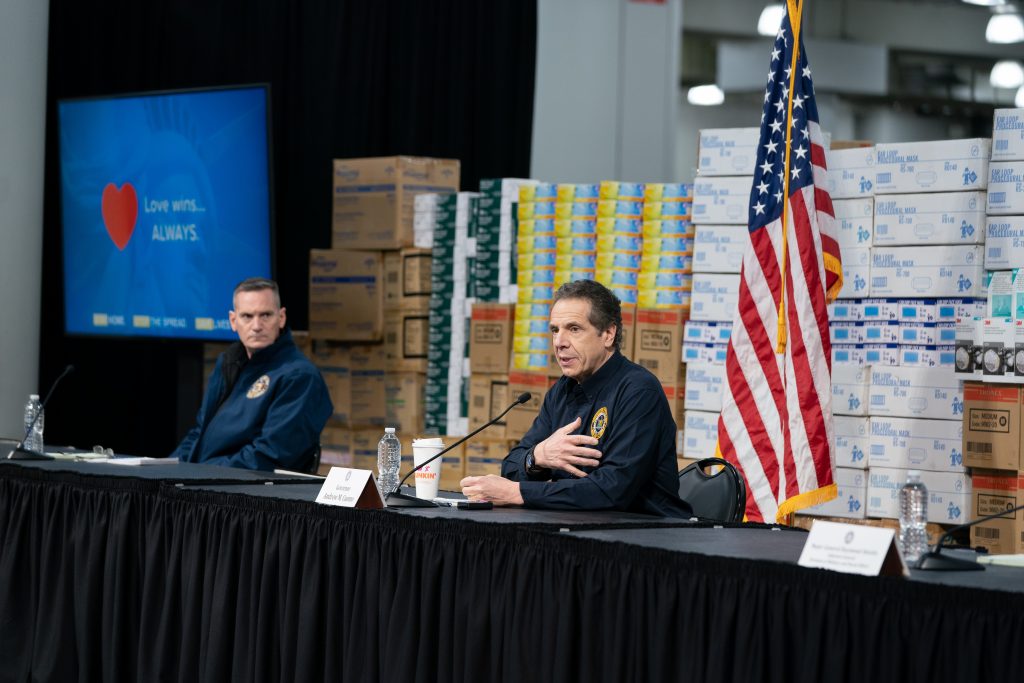 Face masks for front-line staff, normally about 58 cents each, have been quoted by sellers at $7.50, according to Gov. Andrew Cuomo’s office. Thermometers are going for twice their usual price, latex gloves triple. Portable X-ray machines that help diagnose the virus cost as much as 20 times what they were selling for before the emergency.

“Price gouging is a tremendous problem, and it’s only getting worse,” Gov. Cuomo told a Monday press briefing.

With more than 43,000 Americans diagnosed with Covid-19 — and Cuomo saying that as many as 80% of New York’s 19.5 million residents might become infected — buying much-needed medical supplies has become a roller-coaster ride. Prices change by the minute. Buyers outbid one another. Deals collapse at the last moment. Not only are states competing against each other for potentially life-saving gear, they’re vying with the federal government, too. Hospitals in the New York City area, the hardest-hit region in the country, have been forced to cruise the black market for essential equipment.

John Bonamo, chief medical and quality officer for RWJBarnabas Health, the largest hospital system in New Jersey, said his organization paid nine times the usual price last week for medical masks — and would be willing to pay 20 times the typical cost this week. He said he’s getting 15 pitches a day from Chinese factories, requiring cash upfront. Some businesses are legitimate and some not.

“The black market is on fire,” Bonamo said.

Cuomo and other governors have said that one way to stop the competition between jurisdictions is for President Donald Trump to declare a national state of emergency, which would allow the federal government to buy more supplies and to force manufacturers to make more. On Monday, Trump seemed to be headed in the other direction, musing about Americans returning to work soon.

There’s a fragile line between allowing market forces to set prices and crooked behavior. New York law keeps the difference vague. New Jersey is more precise — during a declared emergency, selling goods and services at a price more than 10% higher than immediately before the declaration is considered a violation.

Since Cuomo declared an emergency March 7, New York said it has received more than 2,000 complaints from consumers about price gouging, mostly over things like toilet paper, sterile wipes and hand sanitizer. New Jersey said it has gotten about 1,400 such complaints since Governor Phil Murphy imposed a state of emergency there two days later.

“You have to ask, why is the person selling masks at $7.50?” said Rick Grimm, chief executive officer of the Institute for Government Procurement in Herndon, Virginia. “Just because they can get that price, is it right, is it ethical, to charge that amount of money to people who need it as a life-saving measure?”

U.S. Attorney General William Barr told a press briefing Monday that the Justice Department would crack down on price gouging and hoarders of medical equipment looking to profiteer from panicky times.

“If you’re sitting on a warehouse with masks — surgical masks — you’ll be hearing a knock on your door,” he said.

3M Co., which makes 400 million N95 surgical masks a year, said Monday it had received reports of price gouging. The company said it hadn’t changed its prices as a result of the Covid-19 outbreak and couldn’t control what the prices dealers or retailers charge.

“We hope never to have to use them, but we’re prepared to if we need to,” he said.

Lincoln Hospital in the Bronx borough of New York is swapping equipment and even personnel, based on need, with the city’s 10 other public facilities, according to Nicholas Caputo, a physician there.

The shortages “haven’t hit home for me yet,” Caputo said. Still, he said, Lincoln will “probably start to get into a little bit of trouble” by late March or early April.

“It would be devastating to the community if the hospital wasn’t able to meet their needs,” Caputo said.

Not all vendors are trying to squeeze every last cent. Party Time Rental and Events in Little Rock, Arkansas, won a bid to provide tents to the federal government for patient screenings. The government will pay the company $20,000 for a 60-day rental — what Ray Imbro, the company president, called a “deep discount.”