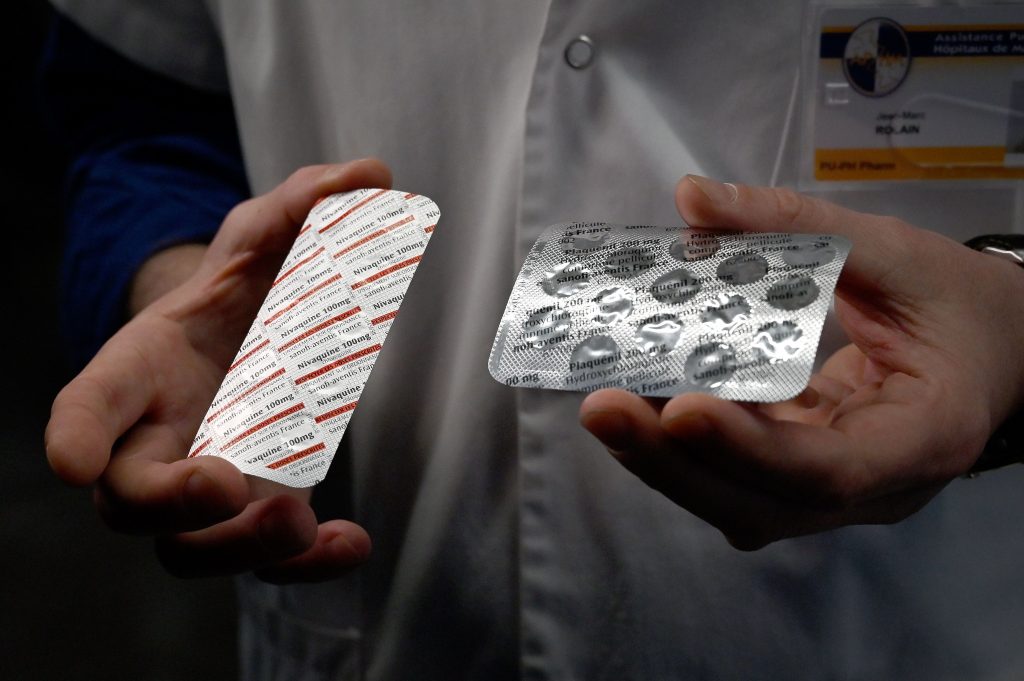 In Maricopa County, Arizona, a couple in their 60s watched politicians and news anchors on TV tout chloroquine, an anti-malaria drug that has shown the ability to disrupt some viruses but that has not been proved effective against the novel coronavirus.

That pharmaceutical name matched the label on a bottle of chemicals they used to clean their koi pond, NBC News reported. The fish tank solvent that treats aquatic parasites contains the same active ingredient as the drug, but in a different form that can poison people.

“I saw it sitting on the back shelf and thought, ‘Hey, isn’t that the stuff they’re talking about…?’ ” the wife, who was not named, told the network. “We were afraid of getting sick.”

The couple reportedly poured some of the fish tank cleaning chemical, chloroquine phosphate, into soda and drank it. They hoped it would stave off a coronavirus infection.

“Within thirty minutes of ingestion, the couple experienced immediate effects” that sent them to the emergency room, a Banner Health spokeswoman said in a statement Monday. They felt dizzy and started vomiting. The husband died at the hospital, and the wife is under critical care, according to the statement.

“Given the uncertainty around COVID-19, we understand that people are trying to find new ways to prevent or treat this virus, but self-medicating is not the way to do so,” Daniel Brooks, Banner Poison and Drug Information Center medical director, said in the hospital’s statement, referring to the diseased caused by the novel coronavirus. “The last thing that we want right now is to inundate our emergency departments with patients who believe they found a vague and risky solution that could potentially jeopardize their health.”

The World Health Organization has busted more than a dozen myths about how to prevent, treat or cure the virus. (There is no known cure for the coronavirus. The best prevention measures are social distancing, hand-washing and avoiding touching your face, according to public health experts.)

But the poisoned Arizona couple were not duped by disinformation online. Instead, they sought an at-home version of a real anti-viral drug that some early reports suggest might help fight the coronavirus. Their mistake was deadly.

The couple’s confusion over chloroquine highlights why the best thing to do if you think you might be infected or exposed to the coronavirus is call your doctor, rather than seeking treatment at home.

President Donald Trump heralded chloroquine, perhaps in combination with the antibiotic azithromycin, as a potential “game-changer” during a briefing on the coronavirus outbreak in the United States. He also encouraged people to ask their doctors for a prescription for existing anti-viral medications such as chloroquine, hydroxychloroquine and remdesivir, which are all being studied to determine whether they can help fight the coronavirus.

“If you wanted, you can have a prescription,” he said last week. “What … do you have to lose?”

Some of these anti-viral drugs have shown promise in small studies in China, France and South Korea. But the limited research has depended on small sample sizes and lacked control groups. Additional data is still needed to buttress claims that the medicines might help fight the pandemic.

Because of those limitations, some researchers have said there is insufficient scientific evidence to support the anti-viral drugs’ ability to treat covid-19. Two weeks ago, a WHO official downplayed the speculative potential of the medicines.

“There is only one drug right now that we think may have real efficacy, and that’s remdesivir,” Bruce Aylward, the WHO’s assistant director general said on March 11. Last week, the WHO launched an international clinical trial, called Solidarity, to more robustly test the four most promising anti-viral treatments, including remdesivir, chloroquine and hydroxychloroquine.

Yet some doctors have prescribed those anti-viral medications as a treatment and a prophylactic against the coronavirus already. So much so, in fact, that supplies of chloroquine and hydroxychloroquine in U.S. pharmacies have been widely depleted and one drugmaker temporarily suspended “compassionate use” access to remdesivir after demand spiked.

Those anti-viral drugs undergoing clinical trials are administered by doctors and researchers who enroll patients in the controlled tests or seek “compassionate use” exceptions from the Food and Drug Administration that allow them to prescribe the drugs even though the FDA has not approved any anti-viral pills to treat covid-19.

Some experts have asked doctors to follow scientific best practices whenever possible so researchers can figure out which anti-viral medicines work best, if at all.

“If you’ve given a lot of stuff to people,” said Anthony Fauci, head of the National Institute of Allergy and Infectious Diseases and a member of the White House coronavirus task force, “you don’t know what works. . . . It may have satisfied your humanitarian instincts of giving something to someone when there’s no proven therapy, but you’ve in some respects done a disservice.”

Experts are warning people not to try homemade cures or take any substance without instructions from a physician.

“Medical toxicologists and emergency physicians are warning the public against the use of inappropriate medications and household products to prevent or treat COVID-19,” the Banner Health statement said. “In particular, Banner Health experts emphasize that chloroquine, a malaria medication, should not be ingested to treat or prevent this virus.”