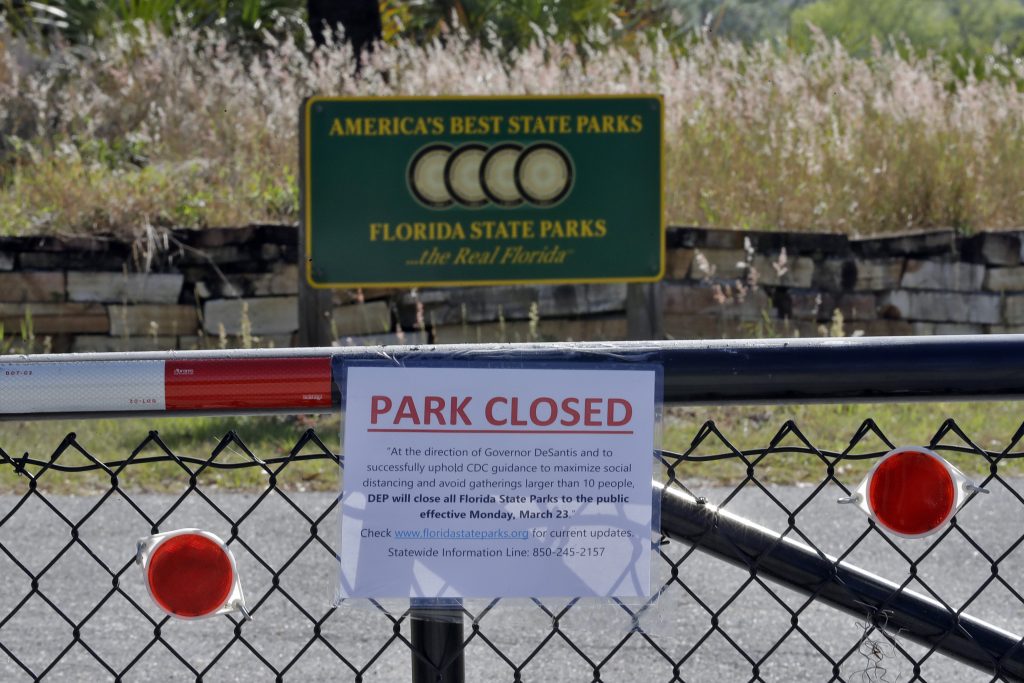 Florida Gov. Ron DeSantis said Monday he is issuing an executive order mandating that anyone arriving on a flight from New York City and the surrounding area submit to self-quarantine for two weeks.

DeSantis said in an address from his Tallahassee office that more than 100 such flights arrive daily in the state and he believes each contains at least one person infected with the new coronavirus.

He said he has been in contact with federal officials about curtailing such flights, but has not yet received a response. He said people will be screened when they arrived and told they must self-quarantine. He said those travelers will not be allowed to stay with family or friends, because that is one way the virus is spread.

He did not say specifically how the self-quarantine would be enforced, but said, “it is actually a criminal offense if you violate the quarantine order.” Florida law says it is a second-degree misdemeanor to violate a quarantine order that could result in a 60-day jail sentence.

DeSantis said people could be “held accountable if they buck the law.”

DeSantis said earlier Monday that he wants to avoid imposing a statewide lockdown like many other states have done, saying he still believes targeting the counties hardest hit by the virus for the most extreme measures is the preferable path.

DeSantis said about a third of Florida’s 67 counties have no confirmed cases and another third have few, so he doesn’t yet see the need to impose a near shutdown on their businesses that have been imposed in large counties such as Miami-Dade, Broward and Palm Beach where the disease has spread into the community. Most of the counties with few or no infections are smaller ones along the state’s northern borders or surrounding Lake Okeechobee.

DeSantis has ordered such statewide closures as bars and gyms and limited restaurants to takeout and delivery. Some counties have gone farther, closing not only nonessential businesses but also beaches, marinas and parks. State parks have been closed.

But DeSantis has not imposed a near-total statewide shutdown of nonessential businesses and bans on social gatherings that have been imposed in California, New York, Illinois and elsewhere.

He said he doesn’t want to cause unnecessary financial hardship or create unintended consequences such as people fleeing the state and spreading the disease.

“In New York [City], when they did the stay-at-home order, what did people do? A lot of people fled the city and they are going to stay with their parents or fly [out],” DeSantis said during a press conference at The Villages, a retirement community of 80,000 residents north of Orlando. “We are getting huge amounts of people flying in. We are looking at how to address those flights.” He said he talked to President Donald Trump on Sunday night about that issue.

As of Monday morning, more than 1,100 people have been diagnosed with COVID-19 in Florida and 13 have died.

Some Florida Democrats are calling on the Republican governor to impose a statewide stay-at-home order. Agriculture Commissioner Nikki Fried, the only Democrat elected statewide, said in a statement that she understands DeSantis is in a tough spot, but any delay will lead to further spread of the disease.

“A piecemeal approach of closing certain communities and businesses risks sowing further confusion. I encourage the Governor to take this decisive action today to save lives and preserve Florida’s economy for our shared future,” Fried wrote. ”

DeSantis said one of the biggest problems statewide is people who “put themselves first” by refusing to avoid large crowds.

“If you shut down the bar, they go to a house party. You have no beach, so they go to a sandbar, which is technically not the beach. I would say for those folks, you need to cool it. … The more stuff you are doing, the more difficult and longer this may go,” DeSantis said.

DeSantis also said he is leery about closing the state’s day care centers because that will affect medical personnel and others who must work and need someone to look after their children.

“It is something we are looking at, but I don’t think it is as easy as saying, ‘Shut all this down and things are going to work out,'” DeSantis said.

The virus causes only minor flu-like symptoms in most people, who recover in a matter of weeks. But it is highly contagious and can cause severe illness or death in some patients, particularly the elderly and those with underlying health problems. Severe cases are often only able to breathe with respirators.