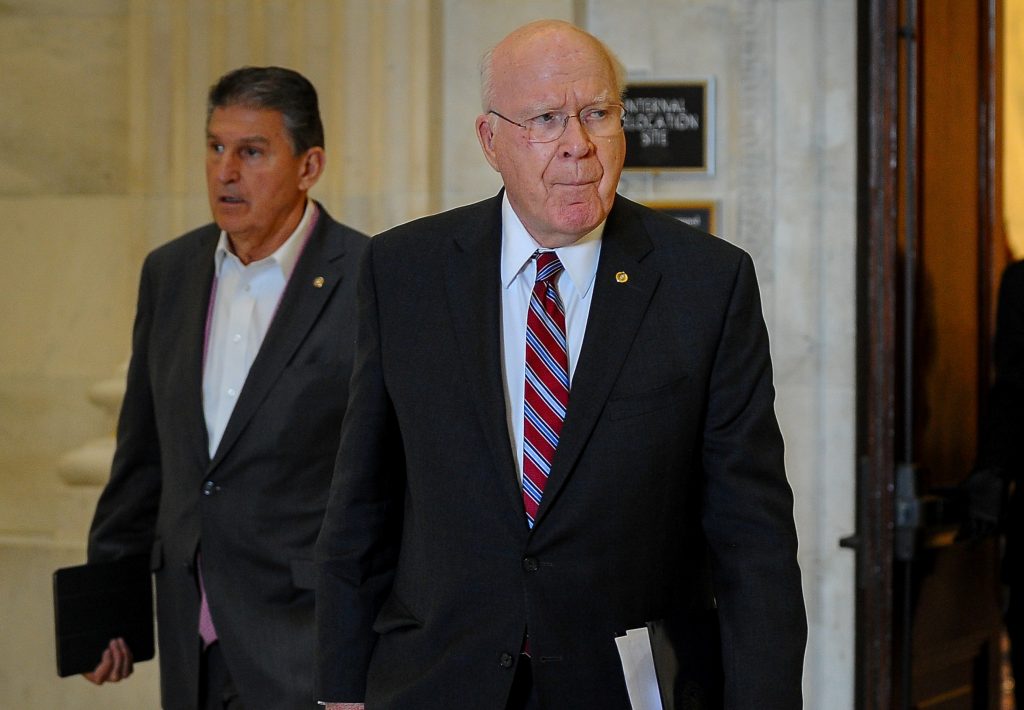 Democrats blocked a $2 trillion coronavirus rescue bill for the second day in a row Monday, and near-pandemonium erupted on the Senate floor with lawmakers venting fury about their failed efforts to address the pandemic’s impact on the U.S. economy.

Ahead of the vote, senators clashed angrily over delays that had bogged down the giant bill, reflecting uncertainty about whether Congress would be able to reach a deal in the coming hours. Some lawmakers had hoped to reach an agreement three days ago, but talks kept breaking down as they negotiated throughout the weekend.

Democrats have argued that the bill is disproportionately tilted toward helping companies and needs to extend more benefits to families and health-care providers; Republicans have countered that the bill offers unprecedented financial assistance to the entire economy and needs to be passed before more people lose their jobs.

The vote Monday was 49-46, well short of the 60 vote threshold needed to advance the legislation for a final debate.

“This has got to stop, and today is the day it has to stop,” an exasperated Senate Majority Leader Mitch McConnell, R-Ky., said. “The country is out of time.”

McConnell accused Democrats of holding up the sorely needed rescue package so they can try to add provisions sought by special interests and organized labor. Democrats have refused to support the key procedural vote that would have made it easier to pass the bill, with many complaining that the legislation did not include much transparency into which businesses could receive hundreds of billions of dollars in emergency loans.

Sen. Joe Manchin, D-W.Va., said the bill, which includes a $500 billion fund for businesses, states, and cities that the administration would have wide latitude to spend, makes the Senate look “more focused on the big corporations and the health of Wall Street than we are on the health care of the people in rural America and Main Street.”

Senate Minority Leader Chuck Schumer, D-N.Y., insisted that he is continuing to negotiate in good faith with Treasury Secretary Steven Mnuchin and hopes to secure a deal as long as he can ensure that worker protections are included, and that the fund for industries has appropriate controls.

“We have an obligation to get the details right, get them done quickly,” Schumer said. “That doesn’t mean blindly accepting a Republican-only bill.”

As markets fell Monday, the Senate floor descended into an uproar and Sen. Susan Collins, R-Maine, sought recognition to speak, to which Schumer objected, prompting Collins to say, “This is unbelievable.”

Schumer then argued with Sen. Ben Sasse, R-Neb., who was presiding over the Senate, to get recognized and get McConnell to explain the schedule ahead. Once that happened, the Senate agreed to proceed with a repeat of Sunday’s procedural vote, which failed again.

Manchin and McConnell then got into it, with McConnell lecturing Manchin about Senate process in an unusual exchange.

Summing it all up was Sen. John Neely Kennedy, R-La., who took his turn on the Senate floor, shaking his head before declaring: “This country was founded by geniuses, but it’s being run by a bunch of idiots.”

“You know what the American people are thinking right now?” Kennedy inquired rhetorically. “They’re thinking that the brain is an amazing organ. It starts working in a mother’s womb and it doesn’t stop working till you get elected to Congress.”

The fiery developments reflected rising tensions among lawmakers over the nation’s predicament and what’s happening in the Senate itself. Sen. Rand Paul, R-Ky., announced Sunday that he has the disease caused by the novel coronavirus, covid-19, and four other GOP senators are quarantined. Sen. Amy Klobuchar, D-Minn., disclosed Monday that her husband is infected with the virus.

The Dow Jones industrial average has lost more than 10,000 points in six weeks, and several million Americans have lost their jobs as the economy contracts in the face of the coronavirus outbreak. A growing number of states are directing citizens to stay home to avoid more contagion, putting pressure on businesses who are losing workers and customers. Scores of companies have rushed to Washington seeking emergency assistance, and health-care providers are overrun with the need for testing kits and safety equipment.

Sen. Dick Durbin, D-Ill., advised everyone to “assume the appropriate distance and take a deep breath” and also said the Senate needed to figure out how to vote remotely, something McConnell has opposed. “We should not be physically present on this floor at this moment,” Durbin said.

The situation was fluid and uncertain, but Mnuchin insisted that a deal must be reached Monday on the approximately $2 trillion bill after three days of efforts.

“We’re going to get this done today,” Mnuchin said while exiting a morning meeting with Schumer. “Everybody is working very hard, so we look forward to a big vote today.”

White House officials have acknowledged the unprecedented assistance the legislation would steer toward corporations, and they have said this money would help protect millions of jobs.

The legislation aims to flood the economy with money, from individuals to small businesses to large industries amid a wave of layoffs and a sharp contraction in consumer spending. It would direct $1,200 to most adults and $500 to most children. It would also create a $500 billion lending program for businesses, cities and states and another $350 billion to help small businesses meet payroll costs.

Senators have been trying to reach a deal since McConnell released the sweeping legislation Thursday night. One deadline after another has been missed.

Democratic concerns have focused on a $500 billion funding program for loans and loan guarantees Republicans want to create, which some Democrats are labeling a “slush fund” because the Treasury Department would have broad discretion over who receives the money. There is little precedent for a program with a similar size and scope.

The bill also contains provisions to send $1,200 checks to many Americans and make $350 billion available to small businesses as they struggle to stay afloat with many workers and consumers confined to their homes to avoid contracting or spreading the coronavirus.

Even as senators were clashing on one side of the Capitol on Monday, on the other side House Speaker Nancy Pelosi, D-Calif., was holding a news conference to announce House Democrats’ version of the stimulus bill. A draft of the bill that circulated Monday laid out a host of conditions for any corporation seeking rescue loans and replaced the GOP’s cash rebate plan with one that would offer more generous checks but to fewer Americans, targeting those who have seen their livelihoods undermined by the pandemic.

“Democrats take responsibility for our workers,” Pelosi said. “We require that any corporation that takes taxpayer dollars must protect their workers’ wages and benefits – not CEO pay, stock buybacks or layoffs.”

But if the House charts its own course on a competing piece of legislation, it could take even longer to arrive at a bipartisan consensus that can pass both chambers and get signed into law.

With more than 35,000 confirmed covid-19 cases in the United States, the impacts of the crisis were growing worse.

“Why would the Democrats hold it up in a moment of time that more people are getting sick?” House Minority Leader Kevin McCarthy, R-Calif., said Monday on Fox News. “The continuity of government you want to keep together and we will, but what’s more important, the millions of Americans out there that need our help today.”

Democrats have complained that the bill assembled by Senate Republicans gives too many benefits to corporations with little oversight of how the money is spent. Trump on Sunday seemed to acknowledge Democrats’ concerns, while insisting that he did not want to offer bailouts.

“I don’t want to give a bailout to a company and then have somebody go out and use that money to buy back stock in the company and raise the price and then get a bonus,” Trump said at the White House. “So I may be Republican, but I don’t like that. I want them to use the money for the workers.”

The bill includes enormous funding streams for households, with payments scaling back for those with incomes of $75,000 and above. But many other parts of the bill are meant to address problems flagged by companies, many of whom have said they will be forced to scale back much of their operations if they don’t receive aid soon.

It also would create tremendous assistance for businesses large and small. The $500 billion in loan programs includes $425 billion for companies, states and cities, though it does not prescribe many terms to dictate how Treasury determines who receives the assistance. Another $50 billion would go to helping passenger airline companies, $8 billion for cargo air companies and $17 billion to help firms deemed important for national security. There would be an additional $350 billion in loan guarantees for small businesses to help them avoid layoffs, and many of those loans could be forgiven if firms meet certain metrics.

Mnuchin said the sweeping economic package is designed to last for 10 to 12 weeks, and the administration would revisit whether it would seek additional assistance from Congress.

The partisan friction on Capitol Hill partly results from lingering resentments among Senate Republicans over the last coronavirus relief bill, a $100-billion-plus package enacted last week and negotiated between Pelosi and Mnuchin. Many Senate Republicans were unhappy with paid-sick-leave provisions in that bill but voted for it anyway.

The enormous package being negotiated is Congress’ third coronavirus relief bill. The first one, which became law earlier this month, appropriated $8.3 billion for the public health system, vaccine development and other needs.