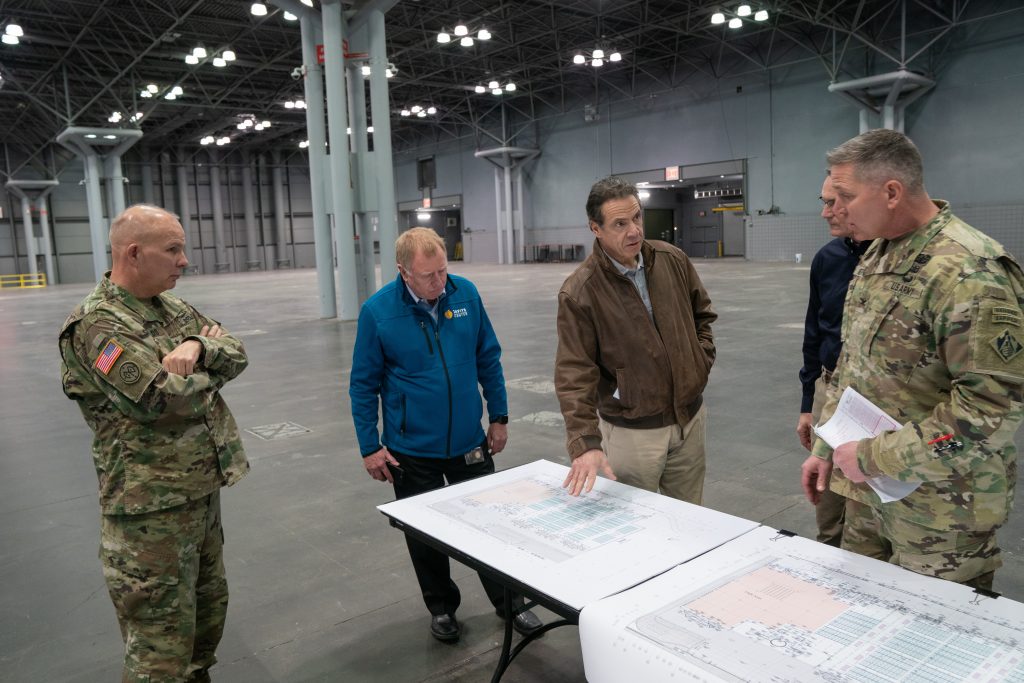 New Yorkers on Monday experienced their first full day of severe restrictions intended to curb the spread of the new coronavirus, as the number of cases in the state continued to surge.

All of the state’s “nonessential” businesses were ordered closed by 8 p.m. Sunday under an order that also banned nonessential gatherings of individuals. New Yorkers may still go outside their homes to pick up groceries or exercise, but must stay 6 feet away from anyone who isn’t a member of their household.

“People are really only going to get food and going back. That’s what we need,” Matt Comet, a private-sector operations executive, observed as he went to pick up a lunch order on Manhattan’s Upper East Side, where sidewalks were all but deserted during a raw, rainy lunch hour.

Here are the latest updates about the coronavirus in New York:

Gov. Andrew Cuomo promised 1,000 temporary hospital beds will be swiftly placed inside a vast Manhattan convention center as officials raced to prepare for an overwhelming number of coronavirus patients.

“This is going to get much worse before it gets better. We are still in the relative calm before the storm,” Cuomo said during a stop at the Jacob K. Javits Convention Center. “You’re going to see the number of infections, the number of cases, increase dramatically. You are going to see an overcapacity of our health system.”

The number of positive coronavirus cases in New York state surged well past 20,000, with at least 157 deaths.

The fatalities have included five residents of a Long Island retirement community that provides assisted living, skilled nursing and other types of care for residents.

The latest death at Peconic Landing, announced Monday, was of an 88-year-old man.

Cuomo said the swift climb in numbers also is due to aggressive testing, with the state now testing 16,000 people a day. As of midnight Sunday, 78,289 tests had been conducted in the state.

But the true number of New Yorkers with the virus is unknown. Many ill people are being told by their doctors not to seek either a test or treatment, but to ride it out at home if their symptoms are not severe. Urging sick people to quarantine themselves, rather than go to the hospital, is intended to relieve pressure on the overtaxed health system.

Construction of the Federal Emergency Management Agency temporary hospital at the convention center will start this week and hopefully be done within 10 days, Cuomo said. Additionally, state officials are working with the federal government to see if they can add another 1,000 beds designated for less-intensive care in the same cavernous space typically used for auto and trade shows.

“This was never an anticipated use,” Cuomo said, “but you do what you have to do.”

Cuomo said the 1,000 hospital beds will relieve pressure on hospitals at capacity as the outbreak spreads. He said 320 federal staff will come to take care of 1,000 people initially.

The governor also has ordered existing hospitals to increase their capacity by at least 50%.

The scramble to add beds is part of a larger effort to line up adequate supplies of ventilators, masks and other medical equipment. Cuomo said the state has enough supplies for today, but cannot make predictions about next week or the week after.

There have been more than 2,500 hospitalizations in the state, with at least 621 ICU patients.

New York City Mayor Bill de Blasio said Monday that he spoke with President Donald Trump and Vice President Mike Pence about the city’s urgent need for medical supplies to curb the spread of the coronavirus. De Blasio told a news conference that 400 ventilators now arriving from the federal stockpile will make “a huge difference.”

New York City has emerged as a worldwide hotspot for the outbreak, with 13,119 positive cases as of 6 p.m. Monday, including 125 deaths, and at least 2,213 people hospitalized, including at least 525 in the ICU.

Cuomo said state health officials will proceed with an experimental treatment for patients seriously ill with the coronavirus. The treatment involves taking plasma from someone who has been infected, processing it and injecting the antibodies into a sick person to stimulate their immune system.

“It’s a trial for people who are in serious condition,” Cuomo said.

The Food and Drug Administration approved the trial, which will begin this week on a “compassionate care basis,” the governor said.

Also, the state on Tuesday will begin to conduct trials of an experimental treatment with the malaria drug hydroxychloroquine and the antibiotic Zithromax, a treatment touted by President Donald Trump.

School was back in session Monday for New York City’s 1.1 million public school students, though instruction was happening in digital classrooms.

City education officials gave teachers a crash course in online instruction last week and distributed laptops and tablets to some students who lack them, but Mayor Bill de Blasio acknowledged that many students still lack devices to access their classes and do their homework with.

“We will reach a lot more kids over time,” de Blasio told WPIX. Officials have said pencil-and-paper packets will be available in the meantime.

People who were in close contact with someone who died of COVID-19 should not attend their funeral services because of the risk they could infect others, according to guidance from New York’s health agency. The state has also limited funeral gatherings to 50% of a funeral home’s maximum capacity or 50 individuals, whichever is lower. There’s no known risk from being in the same room with the body of someone who died from the disease, but the state’s guidance says “people should consider not touching the body.”

“While we all may want to celebrate our loved ones’ lives and memorialize them, at this time, we must continue to practice social distancing and limit large public gatherings, including at funeral services,” said Attorney General Letitia James.

Cuomo said his administration is starting to think about how to get the state’s economy moving again once the worst of the outbreak passes, and whether young people or people who have recovered from COVID-19 could return to work sooner than vulnerable New Yorkers.

“You turned off the engine quickly,” he said. “How do you now start or begin to restart or plan to restart that economic engine?”