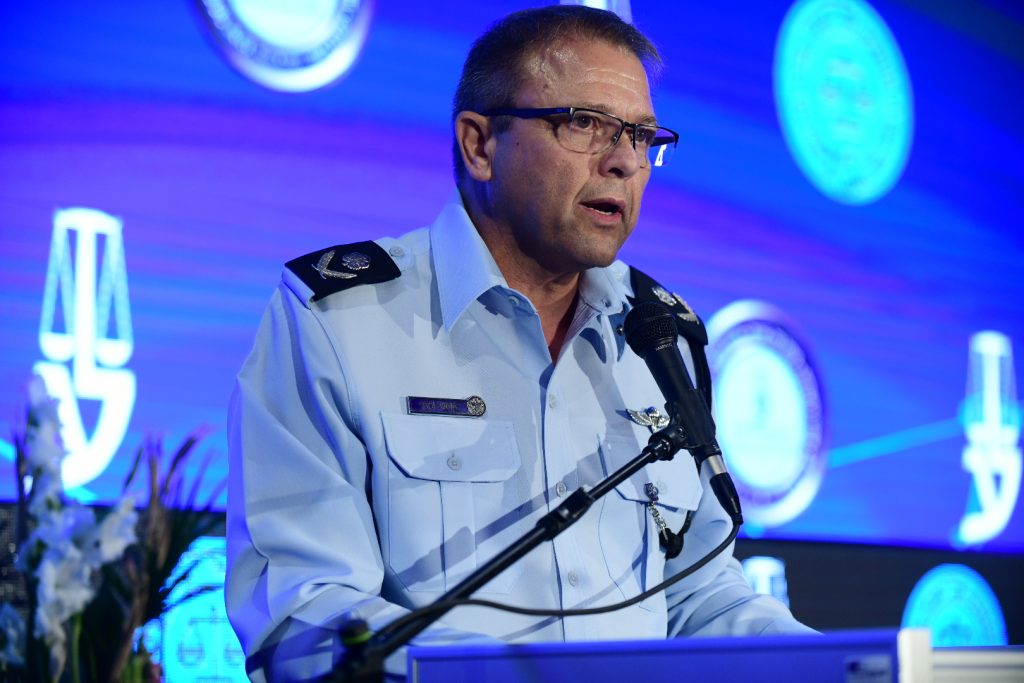 Israel continued to ramp up its response to the coronavirus pandemic, as the number of confirmed cases in the country passed the 1,000 mark on Sunday.

A police contingency plan for a full was approved by Interim Police commissioner Motti Cohen. The plan calls for roadblocks to control traffic into and out of cities, cordoning off public gathering places and readying quick response to reports of disorders.

“Police are ready for any task it is given… as part of its responsibility for public safety,” Cohen says. “I expect the public to continue to show discipline, personal responsibility and mutual care.”

On the social distancing front, the attorney general’s office said Avichai Mandelblit has approved, in principle, an emergency ordinance to delay daylight saving time beyond April 1 as the official calendar has it. It would be aimed at putting off the extra hour of daylight driving and other activities.

Health Minister Rabbi Yaakov Litzman told Channel 12 the government might extend the winter time period until May 1 in order to reduce the amount of time Israeli citizens spend away from homes.

As of Sunday evening, 1,071 Israelis were diagnosed with coronavirus. According to the Health Ministry, 985 had mild cases, 24 moderate and 18 serious cases. One person, an 88-year-old Holocaust survivor, died over the weekend. Some 37 people have recovered from the virus.

The longterm outlook was grim. The Health Ministry’s deputy director general Itamar Grotto said the worst-case scenario was “between 10 and 20 thousand people die of coronavirus in Israel.”

Restrictions on travel and social contact may continue for some time. Dr. Tal Brosh Nissimov, a senior health ministry official for the treatment of epidemics, Kan Reshet Bet that the restrictions will likely continue until summer, when chances of contagion will be reduced, as the virus seems to fade in higher temperatures.

“The purpose of this big drama in the country is the low likelihood of stopping the outbreak. But this is a hope that will probably not come true. The practical goal is to allow us to treat patients well, that we have enough machines and staff enough to care for everyone and not have to sort out whom we treat from whom we don’t,” he said.

“A good thing that can happen is that the whole world gets behind efforts, then there is a chance that the epidemic will stop. The plan right now is to allow us to prevent mass deaths of people because they could not be treated. We hope the summer will bring a decline in the epidemic. I estimate the restrictions will be in place until summer. Restrictions in some form or another will continue for a long time,” Nissimov added.

Regarding media reports of chareidim and Arabs violating the Health Ministry rules, Rabbi Litzman said that public compliance has generally been good, if not perfect.

“I know you might ask me about the chareidim, even the Arabs. I’m against people saying that the chareidi sector is worse than the others. They closed down the synagogues. The rabbis understand just as well.

Ashkenazi Chief Rabbi David Lau called on Jews to observe a fast day in response to the coronavirus epidemic.

“On Wednesday this week, on the eve of Rosh Chodesh Nissan. According to Rabbi Yehoshua, in Nissan, the world was created, so that is the true eve of the new year, a day of prayer and supplication. I would ask that anyone who can take it upon themselves to fast, even for half a day, And whoever has difficulty fasting or a health issue should take upon themselves a time of silence.”