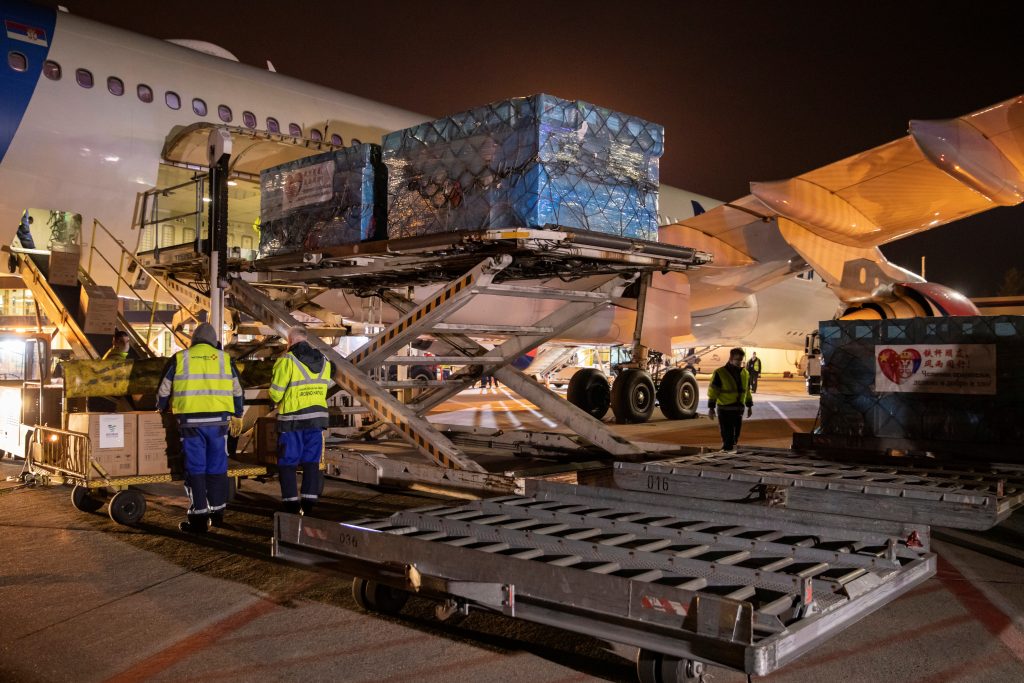 As the fight against a new virus shifts to Europe and beyond, China is supplying millions of masks and other desperately needed items to struggling governments, hoping to build political ties and defuse criticism that it allowed the disease to spread early on.

Serbia’s president plans to be at the airport this weekend to welcome a shipment of medical supplies from Chinese leader Xi Jinping. Xi’s government has flown gloves and protective clothing to Liberia. It is sending 100,000 test kits to the Philippines. More than 10 flights carrying millions of masks and other supplies are bound for the Czech Republic this week.

China, said Czech Interior Minister Jan Hamacek, is “the only country capable of supplying Europe with such amounts.”

It’s part of an effort by the Communist Party to reshape the narrative, from one of early missteps to a nation that acted decisively to bring the outbreak under control. China is touting its deliveries of ventilators and masks overseas and dispatching its medical experts to share the lessons of its success.

China hopes to benefit from a realization in the West of how difficult it is to bring the virus under control, said Julian Ku, a law professor at Hofstra University in New York.

“The Chinese government’s failures … will be less harshly viewed in light of the failures of other governments to respond effectively as well,” he said.

Serbian President Aleksandar Vucic blasted the European Union and praised China for offering help when he announced a state of emergency to combat the outbreak. His country wants to join the EU, but his government has moved closer to Russia and China in a seesaw battle for influence.

“I believe in my brother and friend Xi Jinping and I believe in China’s help,” Vucic said. “European solidarity,” he said, was just a fairy tale.

EU officials denied they were stopping aid to Serbia, but said their first priority was EU members.

China has given $20 million to the World Health Organization for COVID-19 efforts. While the EU and the U.S. have made larger pledges to combat the disease, they are now preoccupied by the crisis at home.

The Chinese “are winning points,” said Theresa Fallon, the founder of the Center for Russia Europe Asia Studies in Brussels. “Serbia thinks that China is their savior.”

Six weeks ago, Chinese authorities were trying to quell outrage at home and condemnation abroad. The critics said due to politically motivated foot-dragging, China had mishandled the viral outbreak racing through a major province and its capital, Wuhan.

Now the criticism is raining down on governments from Tehran to Washington, D.C. A visiting Chinese Red Cross official chastised Italy on Thursday for letting so many people stroll the streets of Milan.

For most people, the new coronavirus causes only mild or moderate symptoms, such as fever and cough. For some, especially older adults and people with existing health problems, it can cause more severe illness, including pneumonia. The vast majority of people recover from the new virus.

At one level, China is reciprocating assistance it received. Nearly 80 countries sent supplies to China, some on charter flights they sent to evacuate their citizens from Wuhan.

But at the same time, China is deepening ties with countries that have been receptive to its outreach as it assumes a larger international role. It is shipping supplies to Cambodia, whose Prime Minister Hun Sen has been an outspoken supporter of Xi and even visited him in Beijing last month as the outbreak raged.

China moved quickly to send experts and equipment to Italy, which last year became the first western European country to join China’s Belt and Road Initiative. The massive program seeks to expand trade by building ports, roads and other transportation projects in a 21st century version of the fabled Silk Road.

China is ready to work with Italy to contribute to international cooperation on epidemic control and to the building of a “Health Silk Road,” Xi was quoted as telling Italian Prime Minister Giuseppe Conte in a phone call Monday.

“It’s not an accident that the heat map of where Xi Jinping is sending condolences, and China is sending N95 masks, overlaps pretty closely with those countries that have demonstrated a willingness to accommodate China,” said Daniel Russel, a former senior U.S. diplomat now with the Asia Society Policy Institute in New York.

Opinions vary on the effectiveness of China’s efforts.

“It’s an open question how far that’s going to get … but they’re clearly giving it the old-school try,” Russel said. The Communist Party’s propaganda, he said, has been more successful at home than abroad.