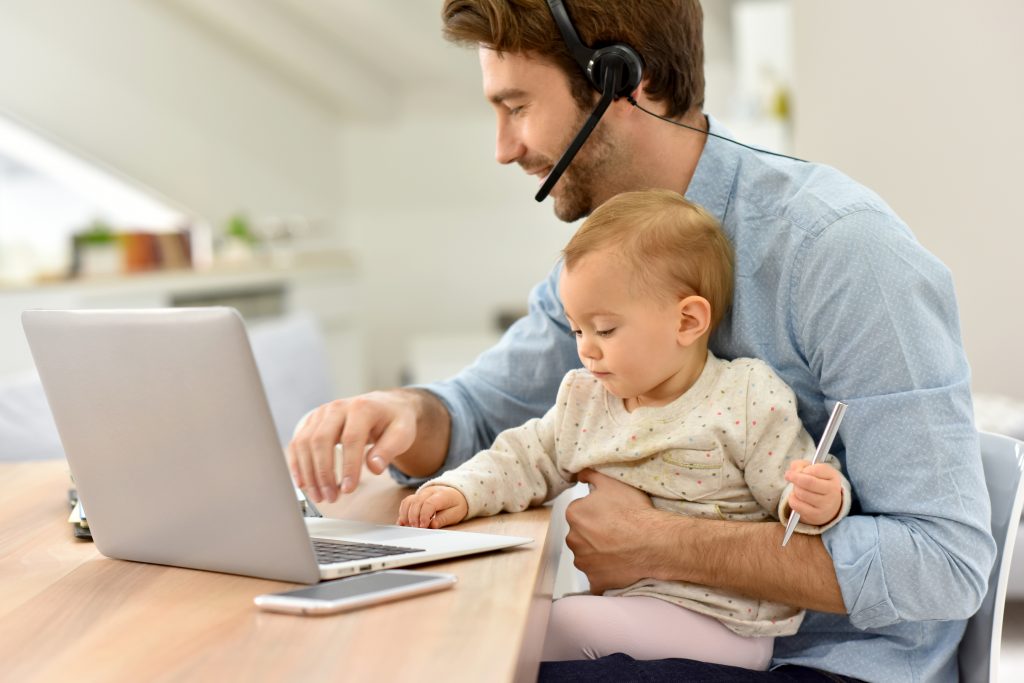 On Monday, Amanda Goetz found herself stuck alone inside her 1,000-square-foot Manhattan apartment with three kids under 7. The coronavirus had canceled school for her 2-, 4- and 6-year-olds, and left her without her nanny to fill the gap. Meanwhile, Goetz, a VP in marketing at The Knot Worldwide, had her workday ahead of her.

One of her first tasks was a 90-minute conference call. An hour in, she was amazed with how well it was going, one child playing an iPad game and another doing an art project. Then, in a scene any parent of young children can relate to, a fight broke out between two of her kids over a Dr. Seuss book. “It was like the world was ending,” she said. Thankfully, she’d been on mute, but it didn’t make it any easier to focus on her meeting.

And so it goes in households across America, where employees attempt to work remotely while managing children whose schools or day cares have been closed to prevent the community spread of the virus that causes covid-19. Optimistic parents have created schedules with “academic time” and “creative time” to manage their children’s time. They’re also flocking to virtual learning programs that promise precious hours or even minutes of distraction. But just days into the new normal, many are already panicking over how to sustain round-the-clock child care and their workloads.

Most workers in the U.S. can’t do their jobs remotely, but the swath that can aren’t operating under ideal conditions, especially if they have kids and full-time jobs. As of Wednesday, some 92,000 schools had closed, are closed or are planning to close in the U.S., 69% of the country’s public and private schools, according to the Coronavirus and School Closures map from the independent K-12 news publication, Education Week. That leaves at least 42.1 million students without a classroom. That doesn’t account for all the preschool-and day-care-aged children now at home, too.

At best, workers will see a productivity dip, but some may have to step back from their jobs either partially or entirely. Congress passed a relief bill with paid leave for those home sick with the virus and allows workers in companies with fewer than 500 people to use a combination of unpaid days and reduced pay to care for children who are stuck at home from school. The daily pay will be capped at $200. It leaves about half of working Americans without relief, according to data from the U.S. Bureau of Labor Statistics.

“While I am happy to see protections for families, I am concerned that this doesn’t cover enough employees,” said Terri Rhodes, chief executive officer of Disability Management Employer Coalition. The Family Medical Leave Act, for example, covers any employer with 50 or more people, a bigger pool of workplaces.

During the best of times, working parents have to manage an imperfect child-care system. Day care can cost almost as much as rent, and school and day care hours don’t align with a 9-to-5 workday. A BBC interview of a father in Korea being interrupted by his dancing child and scooting baby became a sensation in 2017, as parents collectively laughed at the struggle of balancing children and work.

But with the probability of quarantines stretching weeks or months for many employees in single-parent households or dual-working-parent families, the humor of the situation is already starting to fade. Goetz got a surprise work call when she was trying to hold a morning meeting with her kids while they were eating their waffles. “Taking that call caused a full tailspin in the house,” she said, after being forced to pause an activity for her kids. “There are definitely some rules that need to be put in place.”

For now, the desperate are flocking to digital solutions. Age of Learning, maker of education programs has made its content free for families whose schools request access. “There’s also this issue of a potential learning loss if they’re at home too long,” said Kathryn Green, a spokesperson for Age of Learning. The company has seen a tenfold surge in usage from the company’s own subscribers and an influx of new users, with high demand slowing the site down multiple times in recent days, she said. “We have had thousands of school districts and schools themselves reach out to us,” she said.

As of Wednesday morning, the site for Scholastic’s “Learn at Home” program for pre-kindergarten and kindergartners had a note for users: “Due to extremely high traffic to our sites, you may experience momentary technical difficulties.” The company had to resolve a glitch with the site in order to accommodate the surge of interest since it made programming free for children. On Friday, the first day it went live, there were 1 million visits. That shot up to 7.5 million as of Wednesday.

Employers have inundated Elize Shirdel’s inbox with inquiries about offering her company’s just-launched virtual child-care program. Her company HELM.life provides on-site child care for companies when schools are closed but parents still have to work in Canada. For coronavirus lockdowns, she’s created 40-minute modules for small groups of children to join that mix of education with games.

“As people start to work from home they’re starting to realize how much of a challenge it is,” she said. She’s more than quadrupled her bookings in one week, and starting Wednesday, she’s launching “virtual playdates” in which children do a guided activity like Legos or drawing along with their other friends who are stuck at home.

Alban Denoyel, the founder of Sketchfab, which licenses 3D visualization content, wants to avoid screen time for his three young children. He’s working from home with his wife, who’s on maternity leave, and their three young children, aged 6 weeks, 20 months and 5 years old.

“My son who is 5 regularly comes and checks in,” he said. “He stayed with me a bit and he draws, but he does require attention, also time.” Denoyel is putting on Spotify stories for the kids to listen to as a distraction. But he already anticipates he’ll have to do fewer calls, more emails, and “a bit less hours” during the day.

He’s conscious of the struggles his own employees face and has set up a Slack channel for parents to virtually support one another. “I know it’s a specific concern for parents that the others don’t have,” he said. “I’d like to find a way to help.”