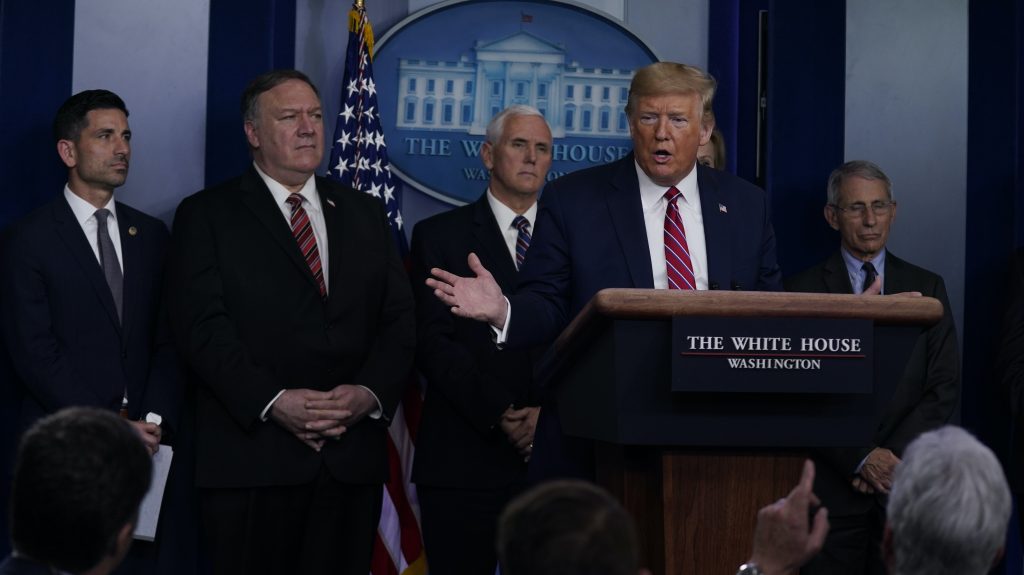 President Donald Trump has invoked the Defense Production Act to get needed medical supplies on the front lines of the coronavirus outbreak, mobilizing the federal government to marshal the private sector to combat the pandemic.

Trump had said earlier in the week he would tap the act as needed. He said Friday he has put that “in gear.”

Senate Democratic Leader Chuck Schumer said he implored Trump during a phone call Friday to invoke the Korean War-era act immediately to order the manufacture of ventilators and other critically needed medical gear. The president told Schumer he would, then could be heard on the telephone making the order. He yelled to someone in his office to do it now, said Schumer’s spokesman, Justin Goodman.

Trump also announced an effective closure of the U.S. border with Mexico, prohibiting most travel except for trade. That brings it in line with the restriction on the Canadian border earlier this week.

The president and the Cabinet officials who briefed reporters focused on the border as they moved to restrict the entry of people without documentation to the U.S. This follows a stepped-up State Department travel advisory telling Americans they should not leave the country.

Officials again urged Americans to maintain social distancing while Dr. Anthony Fauci, the nation’s top infectious-disease expert, applauded strict new measures put in place by the governors of California and New York to limit mobility in an effort to stop the spread of the virus.

The president, addressing reporters at the White House, announced a suspension of interest on federally owned student loans and said the Education Department will not enforce standardized testing requirements for students in elementary through high school for the current year. Under federal education law, states are required to administer standardized tests every school year.

“Americans from every walk of life are coming together,” Trump said. “We are winning and we are going to win this war.”

The new measures come as the administration has been under increased scrutiny for its inability to provide the needed masks and ventilators to hospitals on the verge of being overwhelmed by coronavirus patients.

On Capitol Hill, lawmakers have been working urgently toward a $1-trillion aid package to prop up households and the U.S. economy that would put money directly into American’s pockets.