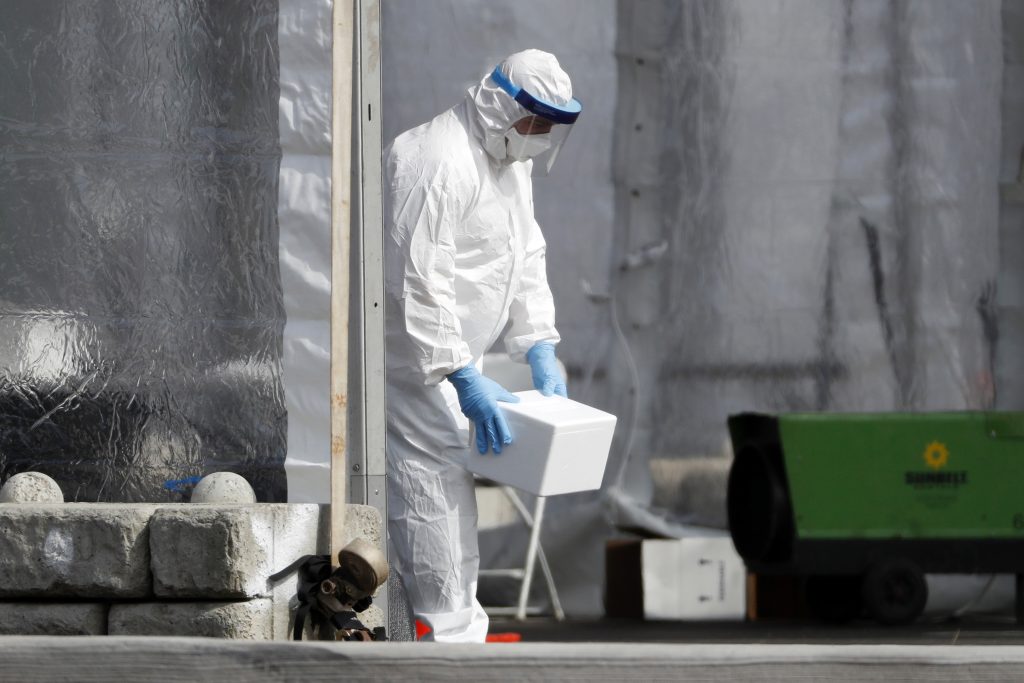 New York City Mayor Bill de Blasio warned that the city’s hospitals are two to three weeks away from running out of essential medical supplies as coronavirus cases grew rapidly in the city and state Thursday.

A look at that and other developments in the outbreak:

New York state’s coronavirus caseload is growing so fast that official counts quickly become obsolete. By Thursday evening, there were over 5,200, with well over 770 hospitalizations, according to numbers released by the state and New York City. At least 26 people have died, 22 of them in New York City.

The number is growing partly because of a dramatic increase in testing. New York state has cumulatively tested 22,000 people, including more than 7,500 in the past day, Gov. Andrew Cuomo said.

In New York City, there are 3,615 positive cases. As of Wednesday evening, 554 people were hospitalized, with 169 in the ICU.

At a drive-through on Staten Island, a trickle of motorists Thursday were directed to one of four large tents by state troopers wearing face masks. Workers at the tents wore full protective gear. One trooper told drivers through a speaker to keep their car windows up and a photo ID on their dashboards until they drove inside.

State officials said the testing site in the parking lot of a psychiatric facility will eventually expand to six lanes and test hundreds of people a day.

Drive-through testing sites were set up this week in at least five locations in upstate New York, but officials say testing supplies are very limited and only those at highest risk should be getting tested.

In Erie County, the health commissioner said they had enough tests for people who already have appointments to get tested through Thursday, but then they’ll be out.

COVID-19 causes mild symptoms in most people but can cause serious illness for some, including older adults and those with certain conditions such as respiratory illness. Most people recover.

While officials expect the vast majority of coronavirus cases won’t require hospitalization, hospitals around the state have been bracing for an onslaught of patients, and officials are worried that medical centers will run out of key items needed to treat them.

“We are two weeks or three weeks away from running out of the supplies that we need most for our hospitals,” de Blasio said, ticking off a list of staggering numbers of items he said health care workers in the nation’s largest city needs by early April: 3 million masks, 50 million surgical masks, 15,000 ventilators, and 25 million each of surgical gowns, coveralls, gloves, and face masks.

He reiterated pleas for the federal government and U.S. military to help provide the items.

Cuomo has also said the state needs to acquire thousands of ventilators before the outbreak peaks.

Cuomo also called on the federal government to use its powers to order manufacturers to speed up production of both ventilators and protective equipment.

Army Secretary Ryan McCarthy and Gen. James McConville, Army chief of staff, said one Army combat support hospital and one field hospital will soon be deployed — and one of the likely locations is New York City, according to a defense official.

Cuomo is requiring businesses in New York to decrease their in-office workforce by 75%, tightening a 50% restriction he announced Wednesday.

He said Wednesday that an executive order will exempt businesses providing essential services, including media, warehouses, grocery and food production facilities, pharmacies, health-care providers, utilities and banks, and others critical to the supply chain.

But Cuomo stressed that he is not going to impose martial law.

“Somehow, people have the idea that New York City may be quarantined, may be locked off, that they may be imprisoned in their own home,” Cuomo said. “None of that is going to happen.”

Cuomo said the current restrictions in New York — which include targeted business shutdowns and work-from-home rules — are “virtually identical” to rules in place around San Francisco. But without the ominous language.

Speaker Carl Heastie said a third Assembly member, Kimberly Jean-Pierre, has tested positive for the coronavirus. Heastie said he has alerted the Department of Health that Jean-Pierre was in Albany Wednesday, though Heastie said she did not have any close contact with other members or staff.

Jean-Pierre is now self-quarantining at home and her offices will be deep cleaned.

Cuomo said his administration has directed mortgage lenders to offer payment waivers for 90 days for borrowers facing financial hardship from the outbreak. Individuals won’t face late fees or a hit to their credit score. Foreclosures also will be postponed or suspended.

Saying New York City faces an unprecedented crisis, City Council Speaker Corey Johnson proposed a $12 billion coronavirus relief plan. The money would cover a temporary universal basic income for all city residents, unemployment benefits for gig economy and freelance workers and small business relief. The Democrat wants the federal government to pick up the tab, but said it could be funded locally by bonds. He said the bonds could be backed by a temporary payroll tax, a surcharge on high-end commercial property or a small tax increase on personal income over $500,000 a year.