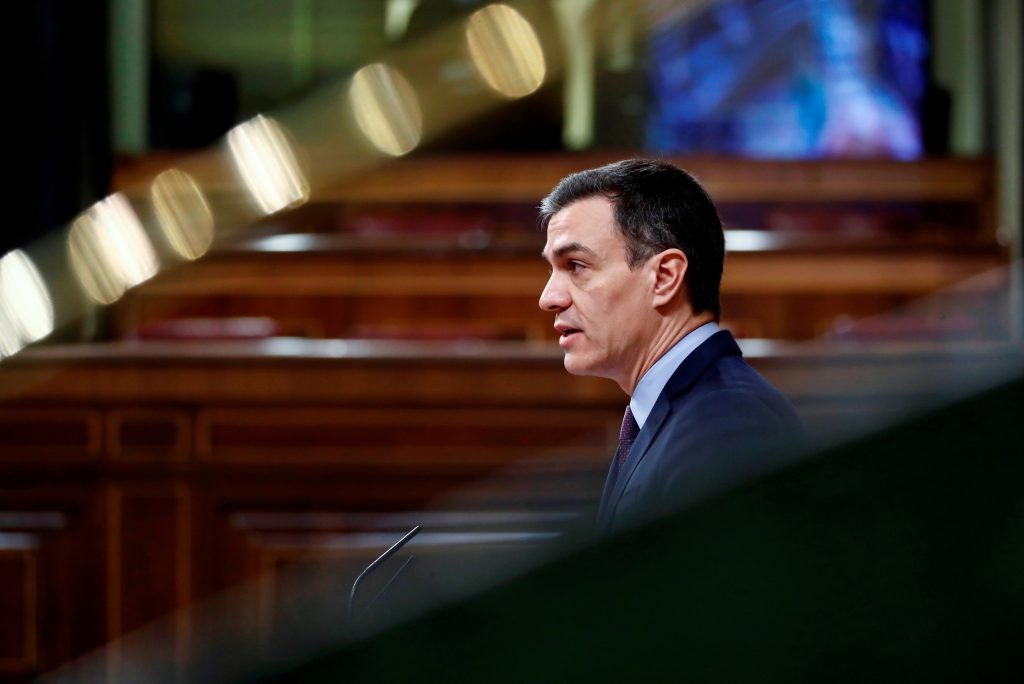 Spain‘s tally of coronavirus cases rose to 13,716 on Wednesday and the number of fatalities rose to 558, said Fernando Simon, the head of the country’s health emergency center.

He said the number of cases rose from a previous tally of 11,178 cases and 491 fatalities on Tuesday.

Meanwhile, Prime Minister Pedro Sanchez said that the Spanish economy will contract as a consequence of the coronavirus crisis. Sanchez, speaking in a near-empty Parliament on Wednesday, urged all to rally in what he called a “war” against the virus.

To avoid any propagation of the virus in Parliament, there were only 28 lawmakers and five ministers to listen to Sanchez in a chamber that normally houses a 350-strong assembly.

“We have never lived through anything like this. And our society, which had grown used to changes that expand our possibilities of knowledge, health and life, now finds itself in a war to defend all we have taken for granted,” Sanchez said.

Between speeches, a masked and gloved cleaner climbed the stairs leading up to the speaker’s platform wiping down the handrails, as well as the table and microphones.

“It is clear that annual GDP will fall, as the European Commission has already pointed out. 2020 will not have 12 months, but 10 or even nine,” Sanchez told Parliament.

“If we manage to maintain employment levels and the production structure as long as the crisis lasts without major and irreparable damage, at the end of the crisis there would be a quick recovery, including a possible rebound effect that would accelerate activity.”

In describing the cruelty of a crisis that had led Spain and several other European countries to shut schools and most shops, Sanchez noted that those losing loved ones to the disease could not hold normal funerals.

Spain is the second-worst hit country in Europe after Italy.

Pablo Casado, leader of the conservative People’s Party, pledged his support to Sanchez, despite saying the government had been to slow to react to the outbreak and should take far more drastic measures.

Casado appealed to the nation to stand united against an “invisible and relentless enemy.”

“Now is the time for us all to pitch in together and row in the same direction,” he said.

“You tried to make us all believe the crisis would be lesser than it is,” Espinosa said. “Concealing the seriousness of the problem prevents the necessary measures from being taken to combat the virus.”

Spain initially took few steps to combat the crisis, moving abruptly to shut down shops and curb public life just over a week ago as the number of cases started soaring.

Spain announced a 200-billion-euro ($220-billion) package on Tuesday to help companies and protect workers and other vulnerable groups affected by the spiraling coronavirus crisis, including state-backed credit guarantees for companies and loans and aid for vulnerable people.

European Central Bank vice-president Luis de Guindos welcomed the measures. “It’s going in the right direction and I hope everyone will support it,” he said, talking to public radio RNE.