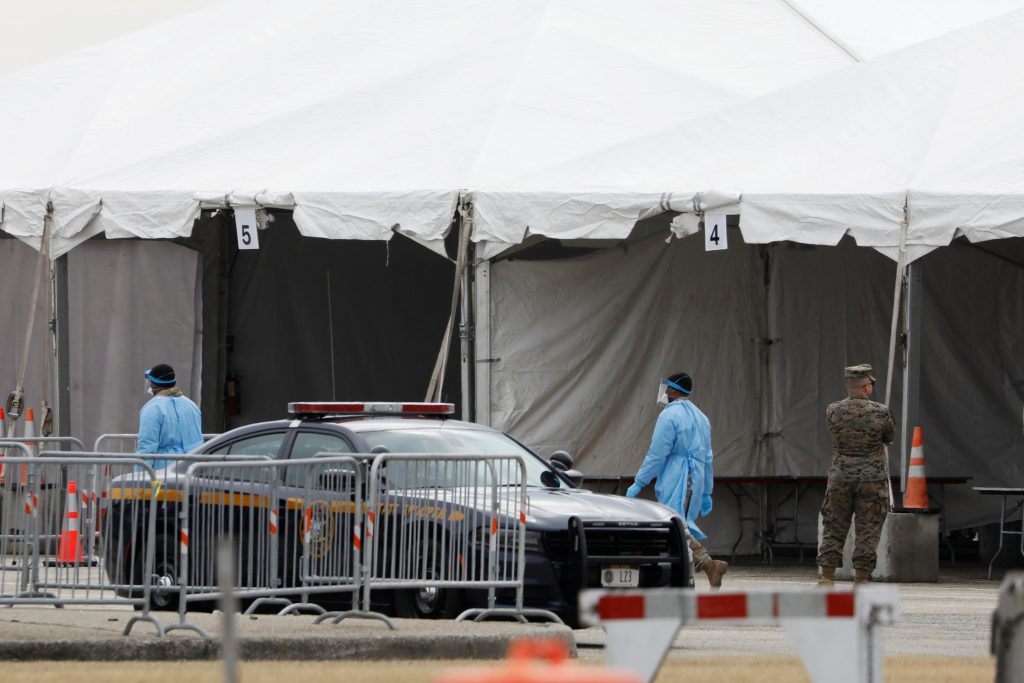 Anticipating a spike in coronavirus patients, New York City-area hospitals are clearing out beds, setting up new spaces to triage patients and urging people with mild symptoms to consult health professionals by phone or video chat instead of flooding emergency rooms that could be overrun.

Coronavirus cases in the state topped 1,300 Tuesday, with more than 800 in the city, but Gov. Andrew Cuomo warned that demand for hospital beds could soon outstrip capacity by tens of thousands as the outbreak surges to an expected peak in 45 days.

At Mount Sinai Health System’s emergency rooms, the numbers of people turning up with respiratory complaints “have increased dramatically” in recent days, said Dr. Brendan Carr, the chair of emergency medicine. Most have mild to moderate symptoms but are looking for tests and answers, he said, and the increase has been offset somewhat by a drop in other patients and moves to devote additional space and staff to emergency rooms.

Elsewhere, people have shown up demanding to be tested even when they haven’t shown any symptoms. Because testing capacity is still limited, merely showing up to an emergency room doesn’t guarantee a coronavirus test, said Dr. Robert Femia, the head of emergency medicine at NYU Langone Health.

Mayor Bill de Blasio pleaded Tuesday with people who have possible coronavirus symptoms to stay home and see if they improve in a few days before even calling a doctor.

“Do not go to the emergency room unless it is a true, immediate and urgent emergency,” the Democrat said.

The new virus that causes COVID-19 causes only mild or moderate symptoms, such as fever and cough, for most people, but severe illness is more likely in the elderly and people with existing health problems. Worldwide, the disease has killed over 7,300 people as of Tuesday, while more than 80,000 have recovered and over 100,000 cases remain active.

Eileen Toback, executive director of the New York Professional Nurses Association, said lingering confusion about what people with symptoms should do and where testing is available is driving people to seek help in emergency rooms.

So far, the virus has caused 264 hospitalizations in the state and 12 deaths, but hospital officials expect a surge to start in the next week or two. They’re getting ready by canceling elective surgeries — as the city has ordered — and freeing up space by discharging patients who are well enough to recover at home.

“Right now, the volume in our emergency departments is pretty manageable,” said Northwell Health spokesman Terence Lynam. “This is really the calm before the storm.”

At Brooklyn Hospital Center, people who suspect they have the virus will be directed starting Wednesday to a tent for screening to determine whether they need testing. The hospital is seeing about 100 patients a day who come in with some potential symptoms, emergency medicine chair Sylvie de Souza said at a news conference with Brooklyn Borough President Eric Adams.

Northwell, which runs hospitals, walk-in clinics and doctor offices, is looking to set up similar screening at a conference center steps from its emergency room in Manhasset, on Long Island.

NYU Langone Health, which has several hospitals in the region, is steering about 1,000 patients a day to video-based consultations known as telemedicine. Most people with coronavirus are able to recover at home and should go to a hospital only if they notice markedly, increasing shortness of breath, said Femia.

Building on a model that debuted in a coronavirus hot spot north of the city, the state is opening more drive-through test sites. Laboratories are boosting test capacity and speed, and some hospitals are adjusting criteria for testing.

At Northwell Health, people are now eligible if they’re hospitalized and sick or symptomatic and believe they were exposed to the virus. Before this week, they had to have had contact with a diagnosed person.

Cuomo renewed his call Tuesday for the U.S. Army Corps of Engineers to build temporary hospitals, and members of the state’s congressional delegation called on President Donald Trump to deploy a 1,000-bed Navy hospital ship to the city to care for non-coronavirus patients while hospitals treat people with the disease.

“We have done a lot, a lot, a lot to prepare, and right now, we are managing,” said Mount Sinai’s Carr.