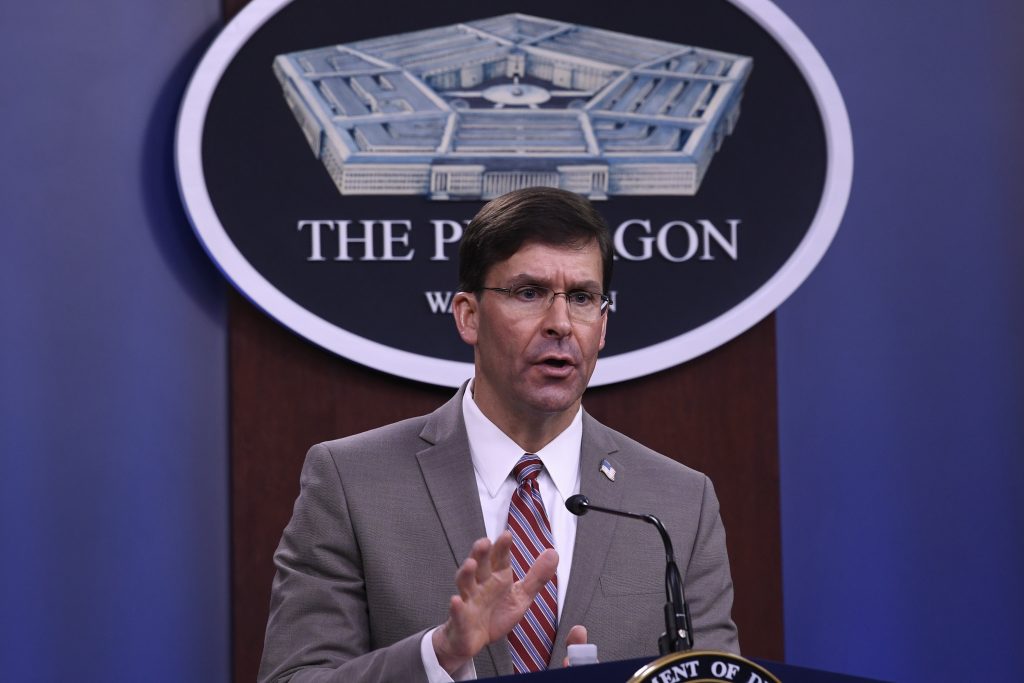 The Defense Department will make available up to 5 million single-use respirator masks, 2,000 deployable ventilators and at least 14 testing labs, the Pentagon chief said Tuesday, as the military expands its response to the coronavirus pandemic.

Defense Secretary Mark Esper said the respirators and ventilators will come from the U.S. military’s strategic reserves and will be offered to the Department of Health and Human Services for distribution.

“The first 1 million masks will be made available immediately,” Esper said, speaking to reporters at the Pentagon.

U.S. officials have warned that there is a shortage of both respirators and ventilators as the United States struggles to boost its capacity to test for the virus quickly. Medical experts have said that the nation needs about 3.5 billion respirators to tackle a severe pandemic.

The military’s ventilators require special training, Esper said, but the Pentagon is “committed to supporting HHS’s requirements in any way we can.”

The labs have been certified to test for the coronavirus among Defense Department personnel and will now also be used to test samples from civilians. Two more laboratories will soon join the list, Esper said.

The announcement came as other parts of the U.S. government increasingly raise suggest that military could assist in combating the virus. Esper said he wants the Defense Department to be a “last resort” in the response but that military officials are speaking regularly to other government officials, including governors, to see where the Pentagon can help.

As of Tuesday morning, more than 1,560 National Guardsmen from 22 states were involved in supporting the covid-19 response after being activated by their governors, said April Cunningham, a spokeswoman with the National Guard Bureau. Those numbers could change rapidly if new needs are identified, she said.

Earlier Tuesday, President Trump said that he has “started the process” of getting the Army Corps of Engineers involved in helping the state of New York find new facilities to provide treatment for the virus. Esper, asked about those comments, said he is open to the Army Corps assisting, but noted that it is primarily a contracting agency.

Esper confirmed reports that the Navy is preparing its two hospital ships to assist, but he offered a major caveat. The ships are designed to treat trauma and do not have segregated areas that are needed to treat infectious diseases. But the ships might help ease the burden on regular medical facilities by caring for injuries and other day-to-day issues, Esper said.

But the defense secretary added that staffing those temporary facilities also could come at a cost, taking medical professionals away from other jobs where they are needed.

“We have to be very conscious of that,” Esper said. “As I’ve talked to a couple of governors today, we talked about that, and I think people are beginning to understand what that trade-off means.”

The discussions come as the Defense Department tracks a rising number of cases among its ranks. At least 36 service members had tested positive for the virus as of Monday, according to the Pentagon.

The Pentagon has stressed the need for social distancing to stem the spread of the virus, but some commanders are continuing to organize large gatherings of service members to discuss responding to the disease.

Esper dismissed concerns about that.

“I trust the commanders to lead their units and take care of them appropriately,” he said. “That has not been raised to me as a problem at this point in time.”