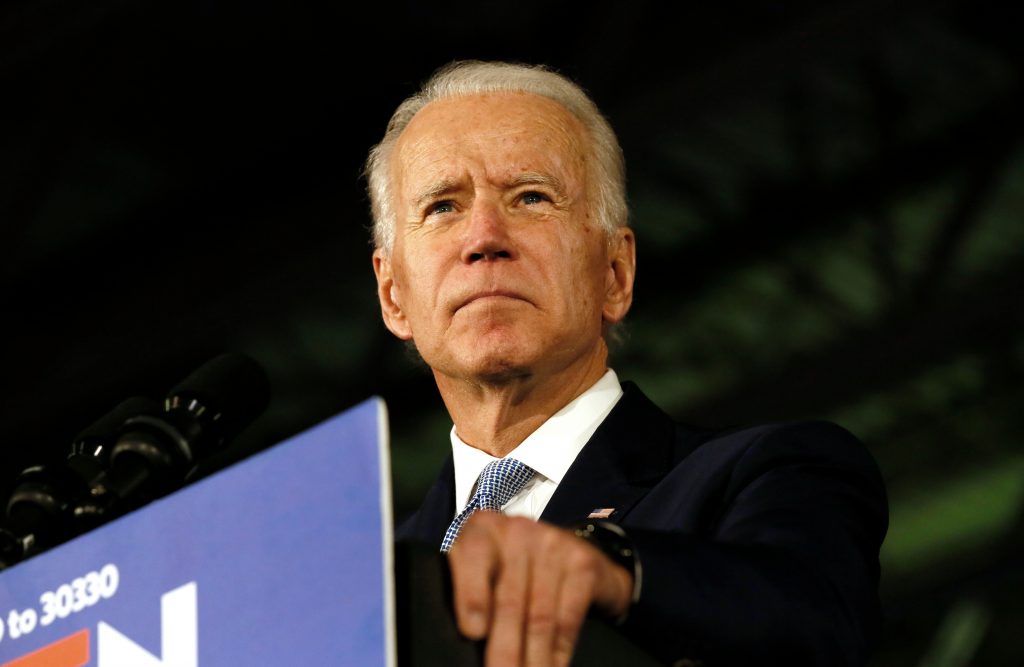 Joe Biden will look to build on his dominant lead in the Democratic presidential race when three states cast votes on Tuesday, but Ohio postponed its planned primary over health concerns amid the coronavirus outbreak.

Biden, the front-runner, hopes that big victories in nominating contests in Florida, Illinois and Arizona can help him amass a nearly unassailable edge over rival Bernie Sanders in the race to find a challenger to Republican President Donald Trump in the Nov. 3 election.

Ohio also was scheduled to hold a primary on Tuesday, but Governor Mike DeWine said public health concerns made in-person voting too dangerous and delayed it until June 2. A county judge blocked his first effort to postpone the vote, but the state health director ordered the polls shut as a health emergency to curb the spread of the novel coronavirus.

“During this time when we face an unprecedented public health crisis, to conduct an election tomorrow would force poll workers and voters to place themselves at an unacceptable health risk of contracting coronavirus,” DeWine said.

Officials in the three other states vowed to press ahead with voting and assured the public it was safe despite fears about the coronavirus, which has dramatically altered American life, disrupted campaign routines and prompted other states to postpone future voting.

On Monday, the White House issued guidelines to avoid gatherings of more than 10 people and to close restaurants. Schools and businesses have been shuttered across the country, raising questions about the wisdom of voting during a global pandemic.

Ohio Secretary of State Frank LaRose said on Tuesday that, especially after that guidance, “there was no way that in good conscience we could order an election, and certainly not a legitimate election, given that we were telling a large portion of the Ohio population that they should not come to the polls.”

But in Florida, Illinois and Arizona, officials said they were taking precautions such as extending early voting hours and moving polling places away from assisted-living facilities – even as some scrambled to find more poll workers to replace those who had backed out.

Civil rights groups filed a federal lawsuit in Florida on Monday against the governor and secretary of state, seeking to extend voting by mail for a week and various other accommodations.

In Florida, the largest state to vote, with 219 delegates at stake, more than 1 million people had already cast Democratic ballots by mail or early in-person voting. In Illinois, nearly 800,000 votes had been cast by mail or through early voting – a substantial increase from the day before the 2016 primary.

“We believe that by following guidance from our state and federal health professionals, voters can vote safely at early voting sites today and at polling places tomorrow,” said Matt Dietrich, a spokesman for the Illinois Board of Elections.

“Also, at this point there is no date in the foreseeable future when we can expect greater safety with any certainty,” he added.

The presidential race will enter uncertain territory after Tuesday. Biden and Sanders have dropped off the campaign trail to help prevent the spread of the virus, and the race could face an extended hiatus if more states postpone voting.

Biden has taken command of the contest in the past two weeks, consolidating Democratic support with a string of decisive primary wins over Sanders, a U.S. senator from Vermont and a democratic socialist with a sweeping agenda to restructure the economy.

Biden’s victories in 16 of the last 21 state primaries have given him a lead of roughly 150 delegates over Sanders in the chase for the 1,991 delegates needed to win the nomination at July’s Democratic convention.

There are 441 delegates at stake in Florida, Illinois and Arizona, and a sweep would make it increasingly unrealistic that Sanders could catch up.

Sanders has vowed to stay in the race despite Biden’s string of recent wins. He attacked Biden’s Senate voting record and leadership on a range of issues during their first one-on-one debate on Sunday, held in Washington without an on-site audience to avoid the possible spread of the virus.

But Sanders could face renewed pressure to end his bid if he loses badly on Tuesday. Many Democrats do not want a repeat of 2016, when they believe Sanders’ long and bitter primary battle with Hillary Clinton played a role in her upset loss to Trump.

The next scheduled primary in Georgia on March 24 has been postponed, along with the April 4 primary in Louisiana, one of four states scheduled to vote that day, and Kentucky’s May 19 primary. Wyoming, which is also scheduled to vote on April 4, has suspended in-person voting in favor of ballot drop-offs and vote-by-mail.

The primary schedule thins out in April, with Wisconsin on April 7 and nothing else until six states vote on April 28.