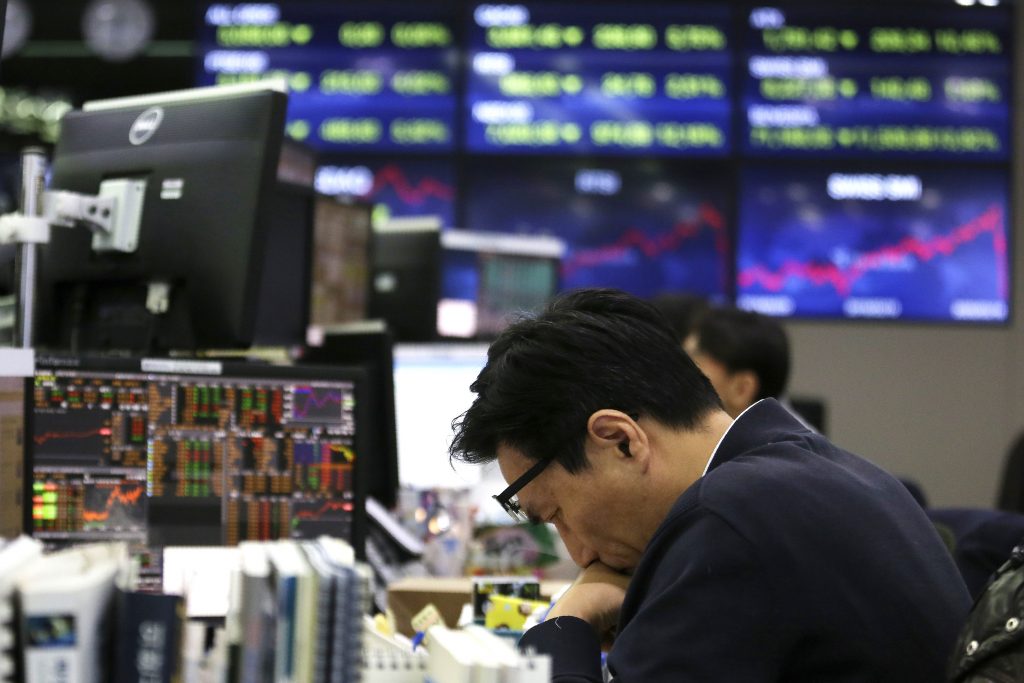 Shares reversed early losses in Asia on Tuesday after the U.S. stock market plunged to its worst day in more than three decades and huge swaths of many economies came to a standstill, with businesses and travel shut down due to the virus outbreak.

Australia’s benchmark led the gains, jumping 5.8% after a 7% plunge on Monday as investors snapped up miners and banks. Tokyo’s Nikkei 225 climbed 0.8% at one point but barely eked out a gain, adding less than 10 points. The Hang Seng in Hong Kong likewise surged but then logged a modest gain of 0.4%. Shares also rose in Thailand and India, but fell in other regional markets.

Monday’s 12% drop for the S&P 500, its worst day in more than 30 years, came as voices from Wall Street to the White House said the coronavirus may be dragging the economy into a recession.

The rebound in Asia followed news that the Trump administration plans strong support for airlines stricken by the outbreak and is pushing the Senate to enact a massive stimulus package to alleviate losses for businesses and individuals affected by the outbreak.

Analysts said bargain hunters appeared to be buying to help fill government oil reserves, anticipating that China’s economy will get a boost from massive stimulus yet to be announced.

Some shares in Hong Kong were selling at a discount, said Lun.

“It’s a see-saw battle between the bulls and the bears,” he said. “I think right now the bulls are winning the upper hand. The key is that Hong Kong is dirt cheap.”

The Philippine stock market was closed as of Tuesday after the government imposed restrictions on movement in the capital.

Global markets have suffered their worst losses since the 2008 financial crisis.

The S&P 500 has shed nearly 30% since setting a record less than a month ago, and it’s at its lowest point since the end of 2018. Monday’s precipitous losses accelerated in the last half-hour of trading after President Donald Trump said the economy may be headed for a recession and asked Americans to avoid gatherings of more than 10 people.

The plunge came even though the Federal Reserve rushed to announce a new round of emergency actions before markets opened for trading on Monday. The moves are aimed at propping up the economy and getting financial markets running smoothly again, but they may have raised fears even further. Investors are also waiting for the White House and Congress to offer more aid to an economy that’s increasingly shutting down by the hour.

From parked airplanes to empty restaurants, nobody knows when economies might revive or even when countries will be able to get the spread of the virus under control.

Closing businesses can help slow the spread of the virus, but it also takes cash out of the pockets of companies and workers. Economists are slashing their expectations for upcoming months, and Wells Fargo Securities said Monday it now projects the U.S. economy will fall into a recession in the April-through-June quarter.

The best-case scenario for many investors is that the economic shock will be steep but short, with growth recovering later this year after businesses reopen. Pessimists are preparing for a longer haul.

The Federal Reserve has been trying to do what it can to help the economy, and over the weekend it slashed short-term interest rates back to their record low of nearly zero.

It also said it will buy at least $500 billion of Treasury securities and $200 billion of mortgage-backed securities to help calm the Treasury market, which is a bedrock for the world’s financial system and influences stock and bond prices around the world. Trading in the market began to get snarled last week, with traders saying they saw disconcertingly large gaps in prices offered by buyers and sellers.

The Fed action came as major economies expanded travel curbs and closed more public facilities, raising the cost of efforts to contain the outbreak that has infected about 175,000 people worldwide. China, where the coronavirus emerged in December, accounts for about half of those, but a dozen other countries have more than 1,000 cases each.

Many investors expect markets to remain volatile as long as the number of new infections keeps accelerating.

“The real fear is going to be if people are going into hibernation, how long will that be, and we have no way of having any knowledge to answer that question,” said Adam Taback, chief investment officer for Wells Fargo Private Wealth Management.

“This is not a two-week event,” he added. “This is going to be playing out in the markets for many more weeks than two weeks.”