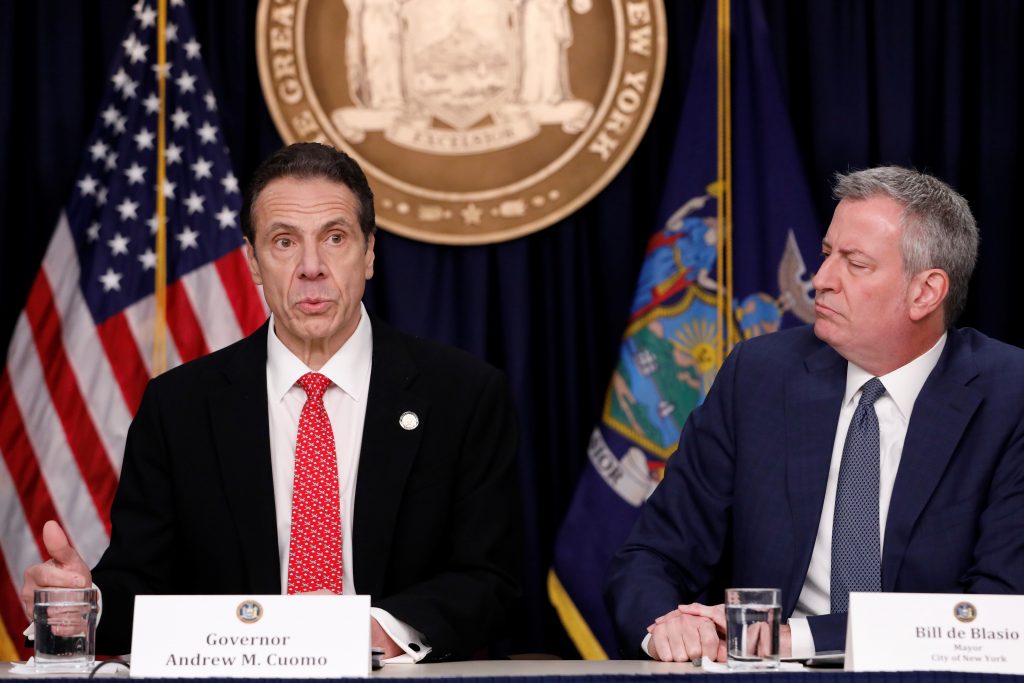 New York officials pleaded with the Trump administration on Monday to coordinate a national response to the coronavirus outbreak, saying patchwork measures enacted by state and local authorities were insufficient to confront a national emergency.

New York City Mayor Bill de Blasio and New York Governor Andrew Cuomo, both Democrats, called for bold federal action involving the U.S. military and the Army Corps of Engineers. The U.S. death toll from the outbreak rose to 65 over the weekend, prompting fears U.S. hospitals will soon be overrun similar to medical centers in Italy.

More than 30 U.S. states have closed schools and at least five states have shuttered bars. Other localities have shut down cinemas, theaters and concert venues.

President Donald Trump declared a national emergency on Friday and has championed his government’s response.

“This should be a reality where the United States is put on a war footing, where the federal government mobilizes all the resources necessary – and it begins with testing,” de Blasio told MSNBC.

“We’re going to have to set up emergency ICUs in hospitals, not only all over New York City, all over America. We’re going to need the United States military to come in with their substantial logistical and medical capacity,” de Blasio said.

Cuomo said the federal government needs to draw up uniform measures for all states to follow, rather than have each state act independently. He warned of a looming crisis as the U.S. healthcare system will get overwhelmed with patients.

“In an emergency, someone has to take charge,” Cuomo told CNN. “You have to have consolidated centralized authority. It makes no sense for all these states to be doing different things.”

Many localities are following the recommendation of the Centers for Disease Control and Prevention against large gatherings for two weeks.

At least 33 states have decided to close public schools, which combined with district closures in other states has shuttered least 64,000 U.S. schools, according to Education Week.

There were further calls for urgency from within the Trump administration. Surgeon General Dr. Jerome Adams said it was important to react aggressively to combat the spread of the virus.

“We are at a critical inflection point in this country,” Adams said in an interview with Fox News.