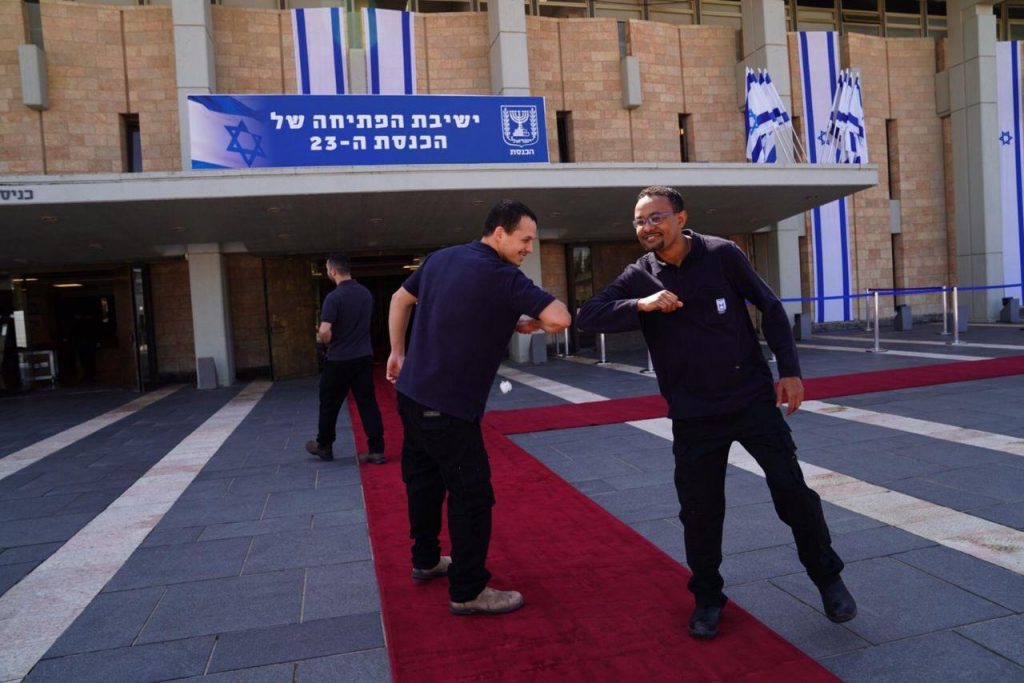 The members of the 23rd Knesset will be sworn in Monday – but unlike in previous sessions, MKs will not meet afterwards for a celebratory l’chaim, nor will there be a Knesset session. And MKs will be sworn in in groups of three – and after the ceremony they will leave the plenum and disperse.

It’s all due, of course, to the coronavirus crisis, which has upended almost every public event in Israel, and in many countries around the world. On Motzoei Shabbos, Prime Minister Binyamin Netanyahu banned gatherings of more than 10 people, and with Knesset security, the speaker of the Knesset, the president, and other officials on hand to witness the swearing-in, only three MKs can participate in the ceremony at one time in order to ensure compliance with the rule. It will take 40 rounds to process all 120 MKs. Dozens of security and health workers were at the Knesset Monday, spraying down all surfaces with sanitizing agents, just in case.

Meanwhile, the impossibility of assembling a quorum in the Knesset was a factor in the decision by current speaker Yuli Edelstein to defer a discussion on replacing him demanded by Blue and White. The party has the votes among MKs to replace Edelstein, with the party’s candidate Blue and White MK Meir Cohen.

Speaking to Yisrael Hayom, Edelstein said that even if the issues surrounding the requirement that a quorum be present in the Knesset were overcome, “I am not obligated to authorize this vote in the Knesset’s first session. I do not intend to delay this vote for weeks, and I am not ‘locked’ to the job of Knesset speaker, which I have been doing for seven years. An attempt to remove me now would mean an end to efforts to form a unity government.” If Blue and White is able to form a stable government, he added, he would step aside.

Sources told the newspaper that United Torah Judaism MK Rabbi Moshe Gafni, who is also chairman of the Knesset Finance Committee, is especially concerned that the Blue and White vote to remove Edelstein could succeed, because the party wants to replace him as well. However, the sources said, that is unlikely to work, as United Arab List MKs prefer to keep Rabbi Gafni in place.