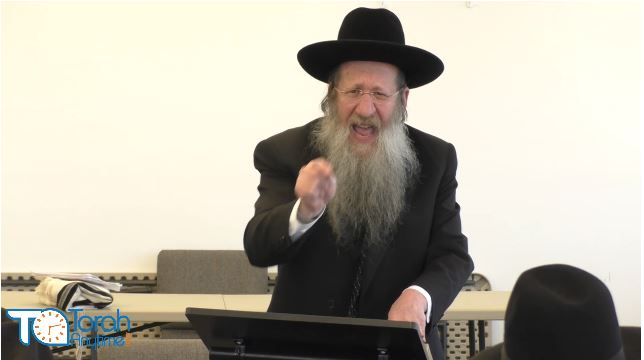 In response to the worldwide pandemic of the coronavirus, thousands of Yidden combined on Sunday afternoon in person and through electronic means to pour out their hearts in emotional recital of Tehillim.

Prior to beginning of the tefillos, a short video was presented in which Harav Gamliel Rabinovitch, shlita, spoke with great emotion what men and women can do to bring about Divine protection in these times.

Rav Gamliel said he was at the  kever of Rav Shimon Bar Yochoi in Meron, and he will accept responsibility for all that daven three times a day with a minyan [besides those who are currently under quaratine], say the words from a siddur (and not from a phone), and do not speak throughout the entire davening. They should daven for the protection of every individual in Klal Yisrael. By doing so, he accepts responsibility that they will not have to be quarantined.

For the women, he asked that they light neiros Shabbos and accept Shabbos early, because Shabbos is the source of all brachah.

Rav Rabinovitch said that we are in the times of Moshiach, and with the proper actions we will see the end of this situation.

Harav Yitzchak Sorotzkin, shlita, began his divrei chizuk by stating that the extent of the panic, insecurity and instability that is currently happening in the world at large has never been experienced before in history. “It’s obvious that this is the Ribono Shel Olam who is orchestrating this. He is screaming, ‘kol Hashem bakoach’, the voice of Hashem is in his power. One has to be deaf not to hear this cry! Hashem is demanding change, that we do teshuvah, and that we recognize that it is coming from Him.”

When someone once told the holy Chofetz Chaim that there was a tsunami in China which killed half a million people, the Chofetz Chaim cried, “We must do teshuvah!” The person was astonished, questioning why something which happened in a far off land has a connection to Jews. The Chofetz Chaim answered, “Hashem speaks Yiddish,” meaning that whatever Hashem does is a message to the Yidden. This is in line with the gemara in Yevamos (63a) which says that calamity only comes to this world for the Jewish nation to learn from it.

The Gemara brings a pasuk in Tzephania (3:7) which seems to be speaking directly to our times. “Just fear me and take mussar.” The pasuk is speaking of a time where death will abound, and people will not travel around, which we see clearly in our times. The reason for this, the pasuk tells us, is for people to realize that it is the power of Hashem and to learn mussar from it.

The Drashos HaRan writes that it is a chessed from Hashem that the troubles begin in a distant land, since it is a warning from Hashem to mend our ways and to be inspired to do teshuvah. If we don’t heed the call, the misfortune comes nearer.

Harav Yeruchom Levovitz, zt”l, spoke prophetic words nearly 100 years ago. He said that the Ramchal writes that the goal of creation is for us to realize that ‘ein od milvado—the is no other power besides Him.’ Rav Yeruchom went on to say that there will come a time when the world will be torn asunder by its seams, and humanity will feel so insecure that they will realize they are powerless, and there is no power other than the Ribono Shel Olam. We will be helpless, and no one will dare say, ‘It is the power and strength of my hand.’

We see this clearly in our times. Why is there such a panic? Because everyone realizes they are powerless! There is no treatment, we are helpless, which causes a panic. We lost our financial security, and even our ruchniyus is lost as they are closing yeshivos and shuls. This upheaval is to bring about the recognition that ‘I am merely a puppet!’ This is what the Gemara in Sotah (49b) means when it says that in the days of Moshiach, we will come to say, ‘We can only rely on our Father in Heaven.’

The Mabit says that this is the essence of tefillah, where we come to recognize that Hashem is the healer of the sick, the one who releases the bonds, etc.

The Yaavetz writes that the reason for the gezeirah of Purim was because Yidden became comfortable with their situation in galus. They had gashmiyus, and they had ruchniyus as well with freedom of religion. In the end, only 40,000 Yidden returned to Eretz Yisrael, and they did not seek out Tziyon. The Chasam Sofer states that this will repeat itself in the days of Moshiach, as we see today that we have plenty, but we are not trying to reveal Kevod Malchus Shomayim.

Rav Sorotzkin mentioned that the gathering would say kapitel 100, which is Mizmor Lesodah, in which we thank Hashem for all we have. Often, we don’t realize the good we have until we go through a trying time, and then we appreciate the good of the past. In this kapital, we say, “know that Hashem is G-d…”. We must realize the message that ein od milvado, and thank Hashem for His bounty on an ongoing basis.