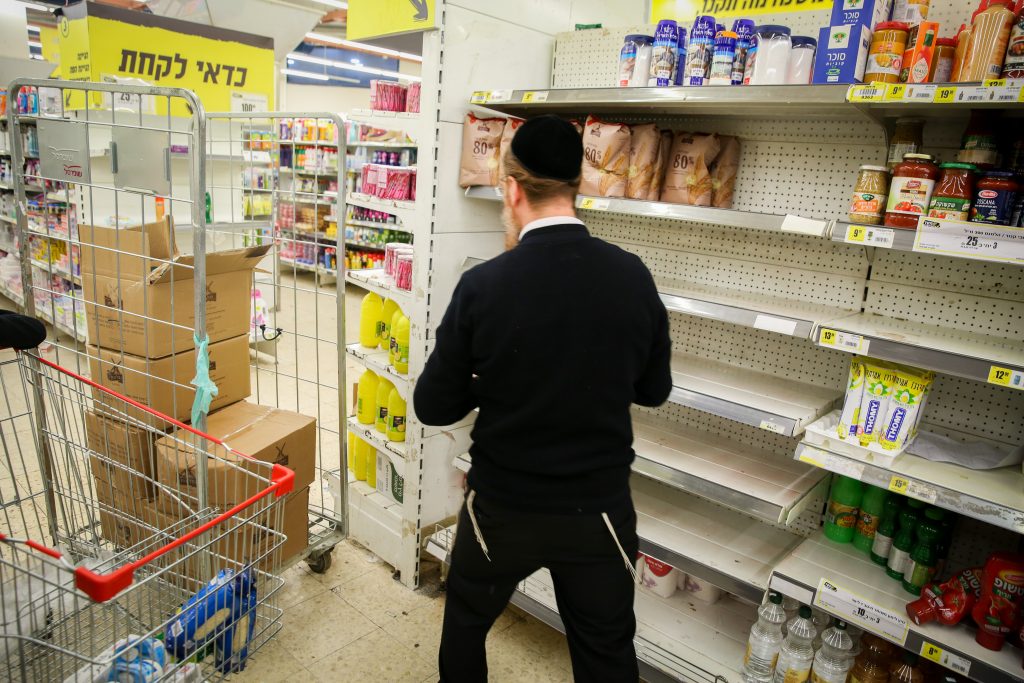 Echoing messages by Prime Minister Binyamin Netanyahu and a long list of government ministers, supermarket king Rami Levy on Sunday that there was no reason to run to the supermarket and hoard items. “There is plenty on the shelves, plenty in warehouses, and plenty on the way,” he told 103FM Radio. “Whatever was grabbed from the shelves we replenished quickly.”

Rumors began spreading late Friday that the government was planning “drastic new steps” to combat the spread of coronavirus. Among the rumors was the closure of malls and shopping centers – a rumor that was actually substantiated Motzoei Shabbos, when Prime Minister Binyamin Netanyahu announced that shopping centers, along with restaurants, coffees shops, places of entertainment, and other leisure venues would be shuttered for the duration of the crisis. He also mentioned that supermarkets and groceries were not on the list, that these would remain open, and that there was no reason to rush to stock up.

Netanyahu was responding to the reality on the ground; there were lines outside supermarkets Saturday night, as Israelis rushed to stock up on supplies, fearing that basics would run out. Among the biggest sellers: Toilet paper and pasta, with those items disappearing from the shelves in many places.

Rami Levy supermarkets only opened Sunday morning, and already at opening time – 7:30 a.m. – “we had about two and a half times more customers than we usually get on Sunday mornings. I can understand them – people are somewhat panicky, and they want to make sure they have what they need at home. I want to calm everyone down – there is enough product and there will be enough product. You don’t have to panic and buy everything in sight, including things you don’t need.”

Many stores that were open Motzoei Shabbos saw as many as ten times the usual number of customers. “Because the ‘workday’ was short on Motzoei Shabbos, everybody came at the same time, and it appeared in some stores that there were shortages because staff didn’t have a chance to replenish the shelves. Any shortages of products are temporary ones, that will be resolved in a few days at most. I urge customers to buy what they need only, there is enough to go around,” Levy said.

Other supermarkets have also taken pains to reassure customers and prevent panic. In a message to customers Motzoei Shabbos, the Shufersal chain said that it would open nearly all its branches Motzoei Shabbos, and that “they will remain open until the last customer leaves. We are committed to ensuring that all our customers are able to get what they need, and there is no need to feel anxiety over supplies.”