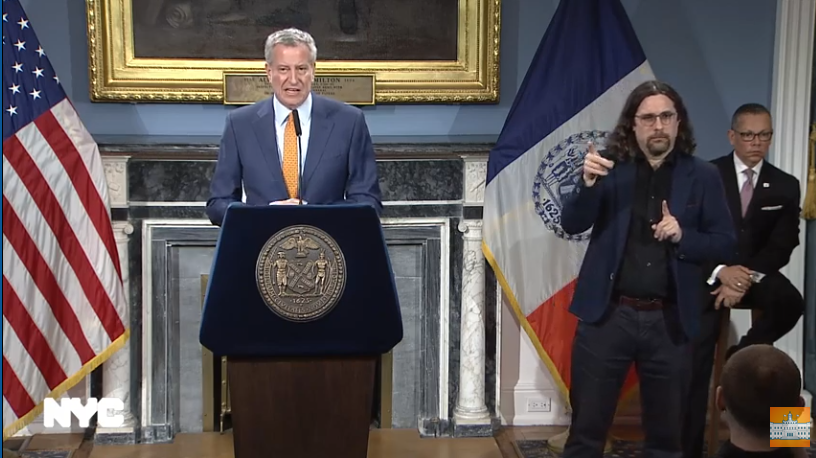 A somber de Blasio announced the decision to close schools through at least April 20 and possibly for the school year, following a growing number of school closures in communities and entire states nationwide and mounting pressure in New York from residents, City Council members and others.

The mayor called it a “very troubling moment, a moment when I’m just distraught at having to take this action, but I became convinced over the course of today that there is no other choice.”

There are 329 confirmed coronavirus cases and five resulting deaths in New York City, all in people over 50 with preexiting health conditions. De Blasio also issued a ban on elective surgeries, in order to free up hospital beds.

The school-closure order only applies to public schools. Some yeshivas plan to close, while others will remain open.

De Blasio said students in kindergarten through 12th grade would begin “remote learning” a week from Monday with teachers being trained on the novel methods beginning Tuesday.

“They have been working on a wartime footing to prepare it,” de Blasio said of administrators.

The shutdown affects the city’s nearly 1,900 public schools. Many private schools already have closed. Multiple states had already announced they were closing schools. So have cities including Los Angeles, Houston, San Francisco, Seattle and Washington, D.C.

Gov. Andrew Cuomo’s office had announced the city school closure moments before de Blasio, but initially said it would start as early as Tuesday.

De Blasio had been reluctant to close the school system because of the consequences for students and families. Just Saturday, the Democratic mayor said keeping schools running was critical. He worried that health care workers, first responders and other needed workers would have to stay home to care for children, and that hundreds of thousands of poor students could go hungry without their free or reduced-price school meals.

He said the city would get through it through everyone “looking out for each other.”

Schools Chancellor Richard Carranza called it “a very sobering day for all of us” and said the decision was made after a situation that’s been evolving and been monitored “day by day, hour by hour and in some cases, minute by minute.”

He said closing the schools was considered the last possible option, but “we’re at the last resort.”

The shutdown had started to seem inevitable Sunday as de Blasio lost key support to keep schools open and Cuomo called for all downstate schools to be closed.

Earlier, George Gresham, president of the health care workers union SIEU 1199, had called on de Blasio to close city schools, a step the mayor still seemed reluctant to take when he cited the union’s support for keeping the schools open as he spoke on WABC-TV earlier Sunday.

The union had previously warned that hospitals, now bracing for a flood of virus patients, could face a manpower crisis if schools closed suddenly and health care workers had to stay home with their children.

“With these critical processes moving, I am now calling on Mayor de Blasio to close New York City’s public schools to help protect public health and prevent the spread of COVID-19,” he said in a statement.