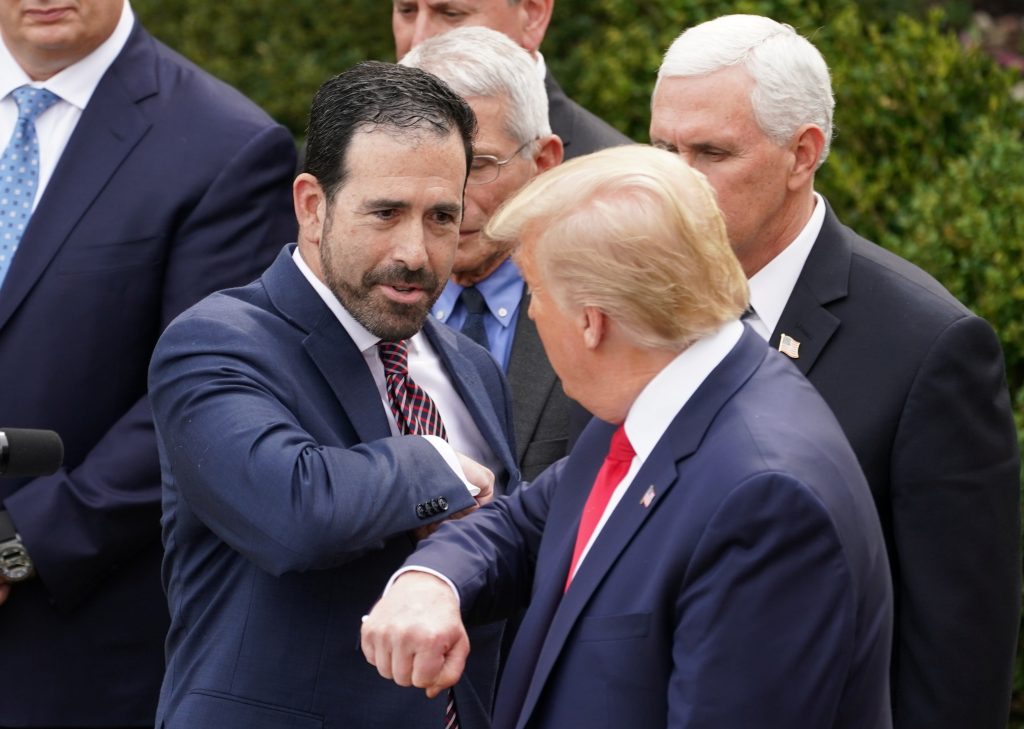 President Donald Trump announced Friday that he is declaring the coronavirus pandemic a national emergency, as Washington struggles with providing Americans with relief and officials race to slow the spread of the outbreak.

Speaking from the Rose Garden, Trump said, “I am officially declaring a national emergency.” He said it would free up as much as $50 billion for state and local governments to respond to the outbreak. Trump also waived interest on federally held student loans and moved to prop up energy markets, by directing the Department of Energy to buy oil to fill the strategic petroleum reserve “’right up to the top.”

Trump said he was also giving Secretary of Health and Human Services Alex Azar emergency authorities to waive federal regulations and laws to give doctors and hospitals “flexibility” in treating patients.

“Through a very collective action and shared sacrifice, national determination, we will overcome the threat of the virus,” Trump said.

He also announced a new public-private partnership to expand coronavirus testing capabilities, as his administration has come under fire for being too slow in making the test available. The partnership will include drive-thru testing in some locations and an online portal to screen those seeking to get tested.

Still, Trump said that officials don’t want people taking the test unless they have certain symptoms. “It’s totally unnecessary,” Trump said. He added, “This will pass.”

Trump made no reference to negotiations between the White House and Congress on a broader aid package, as House Democrats prepare to vote on their own measure Friday.

Speaker Nancy Pelosi said Friday the House would approve its coronavirus aid package, imploring the Trump administration and congressional Republicans to “put families first” by backing the effort to provide Americans with relief.

The House Democratic leader spoke from the speaker’s balcony at the Capitol ahead of Trump’s news conference at the White House, as the power centers of Washington were shuttered to visitors.

“Our nation, our great nation has faced crisis before,” Pelosi said. “And every time, thanks to the courage and optimism of the American people, we have prevailed. Now, working together, we will once again prevail.”

Trump has not yet publicly backed the package, making its outcome uncertain in Congress.

Central to the package is free testing for the virus and guaranteed sick pay for workers who are taking time away from jobs, along with an infusion of dollars to handle unemployment benefits and boost food programs for children, families and seniors.

Pelosi and Treasury Secretary Steven Mnuchin, whom Trump tapped to negotiate for the administration, have engaged in around-the-clock negotiations.

But Republican leaders in Congress slowed the deal, wanting assurances that Trump would publicly support the agreement before signing off on it ahead of any vote, according to a top congressional aide.

Rep. Kevin McCarthy of California, the House Republican leader, huddled with Mnuchin and Trump at the White House earlier Friday.

“We can only defeat this outbreak if we have an accurate determination of its scale and scope, so that we can pursue the precise science-based response that is necessary to put families first,” Pelosi said.

The White House is under enormous pressure, dealing with the crisis on multiple fronts.

The virus has swept in alarming ways across American life, sending the financial markets into a dangerous slide and shuttering schools and sporting events and limiting everyday interactions in communities across the country.