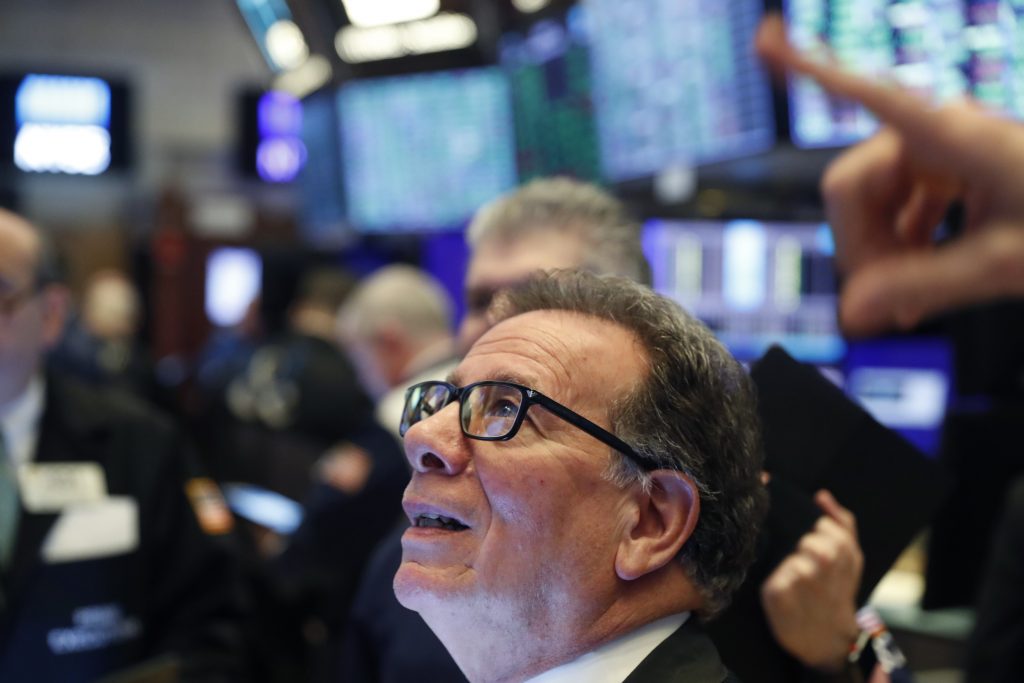 Global financial markets surged Friday, clawing back a small slice of their losses in what has been a brutal week of selling as the spreading coronavirus heightened fear of a global recession.

The early rally for U.S. stocks follows the worst slide for the market since the Black Monday crash of 1987.

The Dow Jones Industrial Average jumped 550 points in the early going, a 2.6% gain. That’s about a quarter of what the index lost a day earlier.

The benchmark S&P 500 index climbed 3%. Major indexes in Europe climbed about 7% a day after one of their worst drops on record.

Bond yields moved broadly higher, a signal some investors were pulling back, at least for now, from seeking less-risky assets.

The rally follows news that the Trump administration and House Democractic leadership are close to announcing an agreement on a coronavirus aid package aimed at reassuring anxious Americans by providing sick pay, free testing and other resources.

The wild swings came as governments stepped up precautions against the spread of the new coronavirus and considered ways to cushion the blow to their economies.

More central banks, including those of China, Sweden and Norway, stepped in to support bond trading, a day after similar interventions from the Federal Reserve and the European Central Bank.

Benchmarks in Japan, Thailand and India sank as much as 10% early in the day, but India’s Sensex gained 3.3% in afternoon trading. In Bangkok, the Thailand SET fell 1.3% after its 10% plunge triggered a temporary suspension of trading.

Markets worldwide have been on the retreat as worries over the economic fallout from the coronavirus crisis deepen.

The gains in Europe were the latest chapter in a period of remarkable volatility for financial markets, with major indexes plunging into bear market territory at record pace.

Australia’s market jumped 4.4% after state and territorial leaders agreed to raise spending to counter the impact of the viral outbreak that has spread from central China across the globe, infecting 128,000 people.

Losses narrowed in mainland China, where communities are recovering from the worst of the virus. The Shanghai Composite index fell 1.2%.

The sell-off on Wall Street Thursday helped to wipe out most of the big U.S. gains since President Donald Trump took office in 2017.

“Between the lack of a strong U.S. fiscal response and the latest travel ban for arrivals from Europe to the U.S., global markets appear to have been tipped over into a sell-everything mode,” Jingyi Pan of IG said in a commentary.

Not all markets have suffered equally, but many are down by double digits from just weeks earlier. Thailand’s SET has lost nearly 40% and the Philippines’ benchmark is down more than 30%.

Overriding concerns about the actual impact on business and trade is pessimism over how the crisis is being handled, and the “sum of all fears are culminating with the view that policymakers remain well behind the curve,” said Stephen Innes of AxiCorp.

Despite the slight improvements in some markets, gloom prevailed in Asia on Friday. Tokyo’s close was its lowest in nearly four years. South Korea’s Kospi sank 3.4%..

The worldwide rout has come amid cascading cancellations and shutdowns across the globe — including Trump’s suspension of most travel to the U.S. from Europe — and rising worries that the White House and other authorities around the world can’t or won’t counter the economic damage from the outbreak anytime soon.

Just last month, the Dow was boasting a nearly 50% increase since Trump took the oath of office on Jan. 20, 2017. It officially went into a bear market on Wednesday, finishing down more than 20% from its all-time high. For the S&P 500, this is the fastest drop since World War II from a record high to a bear market.

In other trading, the oil market, which suffered huge shocks a week ago as Saudi Arabia and Russia clashed over output cuts, was recovering some ground.