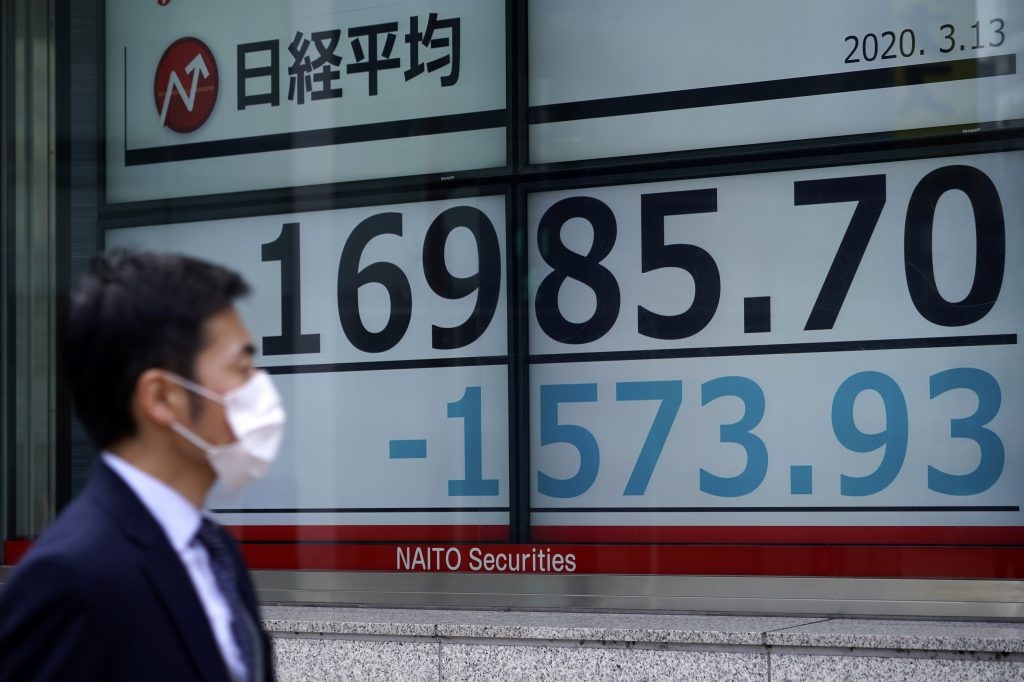 Asian shares plunged, then recovered slightly as Friday the 13th brought still more turmoil to markets reeling from uncertainty over the coronavirus crisis.

Benchmarks in Japan, Thailand and India sank as much as 10% following Wall Street’s biggest drop since the Black Monday crash of 1987.

Tokyo’s Nikkei 225 fell nearly 6%. India’s Sensex yoyo’d between gains and losses after a 10% crash briefly halted trading. In Bangkok, the Thailand SET gained 0.5% after a temporary suspension of trading earlier in the day.

Markets worldwide have retreated as fears of economic fallout from the coronavirus crisis deepen and the meltdown in the U.S., the world’s biggest economy, batters confidence around the globe.

But there were signs that government action was beginning to resonate with panicked investors as some ventured back into markets in search of bargains.

In Australia, the S&P/ASX 200 jumped 4.4% to 5,539.30 after state and territorial leaders agreed to up spending to counter the impact of the viral outbreak that has spread from central China across the globe, infecting 128,000 people.

“The governor of the Reserve Bank made it very clear this morning the levers of fiscal policy need to do their job here,” Prime Minister Scott Morrison said after a meeting of top officials on Friday.

“We need to put budgets to work to keep people in work,” said Morrison, whose federal government has already pledged $11.4 billion in stimulus.

Losses narrowed in mainland China, where communities are recovering from the worst of the virus. The Shanghai Composite index fell 1.5% to 2,880.14.

Overnight, the sell-off on Wall Street helped to wipe out most of Wall Street’s big gains since President Donald Trump took office in 2017.

European markets fell 12% in one of their worst days ever, even after the European Central Bank pledged to buy more bonds and offer more help for the economy.

“Between the lack of a strong U.S. fiscal response and the latest travel ban for arrivals from Europe to the U.S., global markets appear to have been tipped over into a sell-everything mode,” Jingyi Pan of IG said in a commentary.

Overriding concerns about the actual impact on business and trade is pessimism over how the crisis is being handled, with the “sum of all fears are culminating with the view that policymakers remain well behind the curve,” said Stephen Innes of AxiCorp.

Not all markets have suffered equally, but many are down by double-digits from just weeks earlier. Thailand’s SET has lost nearly 40% and the Philippines’ benchmark is down more than 30%.

The worldwide rout has come amid cascading cancellations and shutdowns across the globe — including Trump’s suspension of most travel to the U.S. from Europe — and rising worries that the White House and other authorities around the world can’t or won’t counter the economic damage from the outbreak any time soon.

Stocks fell so fast on Wall Street at Thursday’s opening bell that they triggered an automatic, 15-minute trading halt for the second time this week. The so-called circuit breakers were first adopted after the 1987 crash, and until this week hadn’t been tripped since 1997.

The Dow briefly turned upward and halved its losses at one point in the afternoon after the Federal Reserve announced it would step in to ease “highly unusual disruptions” in the Treasury market and pump in at least $1.5 trillion to help calm the market and facilitate trading.

But the burst of momentum quickly faded.

The combined health crisis and retreat on Wall Street have heightened fears of a recession.

Just last month, the Dow was boasting a nearly 50% increase since Trump took the oath of office on Jan. 20, 2017. By Thursday’s close, the Dow was clinging to a 6.9% gain, though it was still up nearly 16% since just before Trump’s election in November 2016.

The Dow officially went into a bear market on Wednesday, when it finished the day down more than 20% from its all-time high. For the S&P 500, this is the fastest drop since World War II from a record high to a bear market.

“This is bad. The worst and fastest stock market correction in our career,” Chris Rupkey, chief financial economist at MUFG Union, said in a research note overnight. “The economy is doomed to recession if the country stops working and takes the next 30 days off. The stock market knows it.”

After earlier thinking that the virus could remain mostly in China and that any dip in the economy would be followed by a quick rebound, investors are seeing the damage and disruptions mount.

“Anyone who tells you they know how long this is going to last is wrong,” said Adam Taback, chief investment officer for Wells Fargo Private Bank. “The uncertainty here is trying to figure out how you get this virus under control, and is that a matter of days, weeks or months.”

In other trading, the oil market, which suffered huge shocks last week, is still on the decline.

U.S. benchmark crude erased early losses, gaining 1.6%, or 51 cents, to $32.01 per barrel in electronic trading on the New York Mercantile Exchange. Brent crude, the standard for international oil pricing, picked up 52 cents, or 1.6%, to $32.74 per barrel.