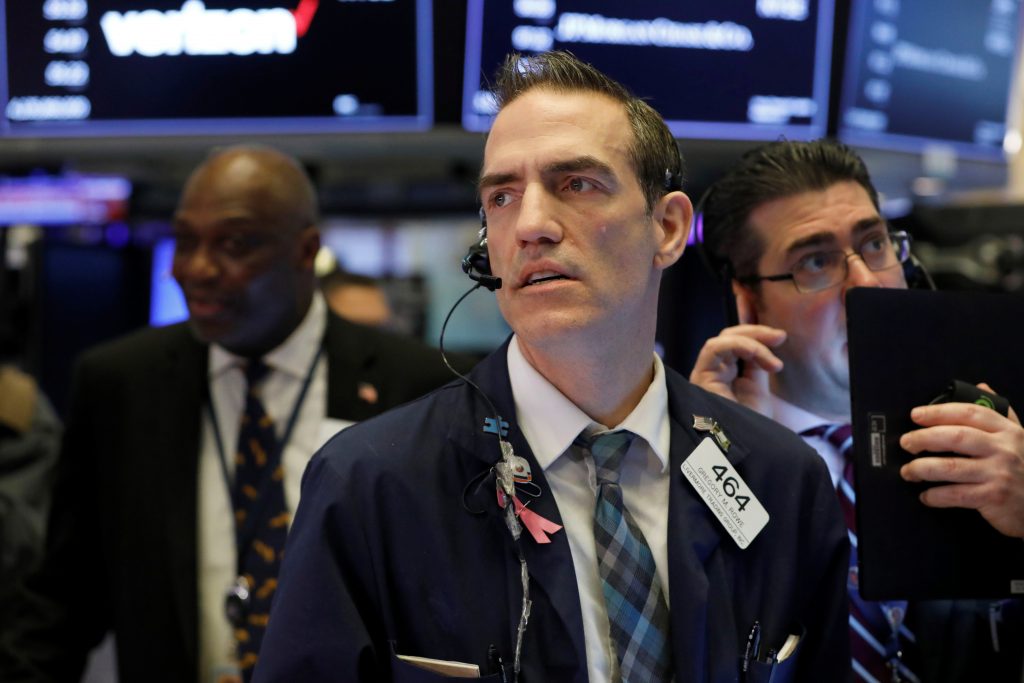 Stocks are falling sharply again Wednesday, wiping out virtually all of a huge rally from a day earlier as Wall Street continues to reel from worries about the coronavirus. The losses deepened after global authorities declared the coronavirus crisis a pandemic.

Another big central bank made an emergency cut to interest rates in hopes of blunting the economic pain caused by COVID-19, which economists call the global economy’s biggest threat. But investors are still waiting for details promised earlier by President Donald Trump on potential aid for the economy through tax breaks and other relief.

Stocks fell from the opening of trading in New York, including a 4.5% loss for the S&P 500. The Dow Jones Industrial Average was down more than 1,200 points.

“The government probably should have been thinking about stimulus last month,” said Kristina Hooper, Invesco’s chief global market strategist. “Every day that passes makes the economic impact of coronavirus that much worse.”

Many investors are worried that a divided Congress will have trouble agreeing to any plan, she said.

The speed of the market’s declines and the degree of its swings the last few weeks have been breathtaking. It was only three weeks ago that the S&P 500 set a record high. Since then, it’s lost 18.6%, and the Dow Jones Industrial Average has had six days where it swung by 1,000 points, not including Wednesday. The Dow has done that only three other times in history.

That’s why many analysts say markets will continue to swing sharply until the number of new infections stops accelerating. In the United States, the number of cases has topped 1,000. Worldwide, more than 119,000 people have been infected, and over 4,200 have died.

Neither lower interest rates nor stimulus plans by governments will stop this crisis and worries about its effect on the economy. Only the containment of the virus can do that. But they can provide support to the economy in the meantime, and investors fear things would be much worse without them.

The Bank of England’s emergency rate cut on Wednesday follows an earlier one by the Federal Reserve, and economists expect the European Central Bank to be the next to act. It has a meeting Thursday on monetary policy.

Even a climb in Treasury yields, which has been one of the loudest warning bells on Wall Street about the economic risks of the crisis, wasn’t enough to turn stocks higher. The yield on the 10-year Treasury rose to 0.82% from 0.75% late Tuesday. That’s a sign of less demand for ultra-safe U.S. government bonds.

For all the fear in the market and selling by huge institutions, many regular investors have been holding relatively steady.

Clients are mostly sticking to their long-term investment plans, he said, though some may want to adjust their portfolios if they feel too uncomfortable with all the volatility. Still, the standard advice from most advisers is to focus more on long-term goals and pay less attention to short-term swings, which will likely dominate markets for some time.

“We’re looking at a month of volatility as the coronavirus plays out,” Kinahan said.

Stock prices generally move on two main factors: how much profits companies are earning and how much investors are willing to pay for each $1 of them. For the first part, Wall Street is slashing its expectations, which undercuts stock prices. For the second, all the coronavirus worries make investors less willing to pay high prices. Valuations were already above historical averages before the market’s declines began.

Strategists at Goldman Sachs on Wednesday sharply cut their expectations for earnings growth this year, saying it will lead to the end of this bull market, which began more than a decade ago.

A plunge in crude prices has wiped out profits for energy companies, while record-low Treasury yields are squeezing the financial sector. The strategists say S&P 500 earnings per share will likely fall 15% from a year earlier in the second quarter and could drag the index down to 2,450 in the middle of the year. That would be a nearly 28% drop from its record.

Goldman Sachs, though, also says it expects the drawdown to be short, with earnings rebounding later in the year as the pain from the coronavirus wanes. It says the S&P 500 could rise back to 3,200 by the end of the year.

The S&P 500 is in the midst of its longest bull market on record, unless it’s not already over. It began in March 2009 after emerging from the financial crisis, but the index is down nearly 19% since setting its record last month. If it hits a 20% decline before rallying back to its high, it will mark the bull market’s end.