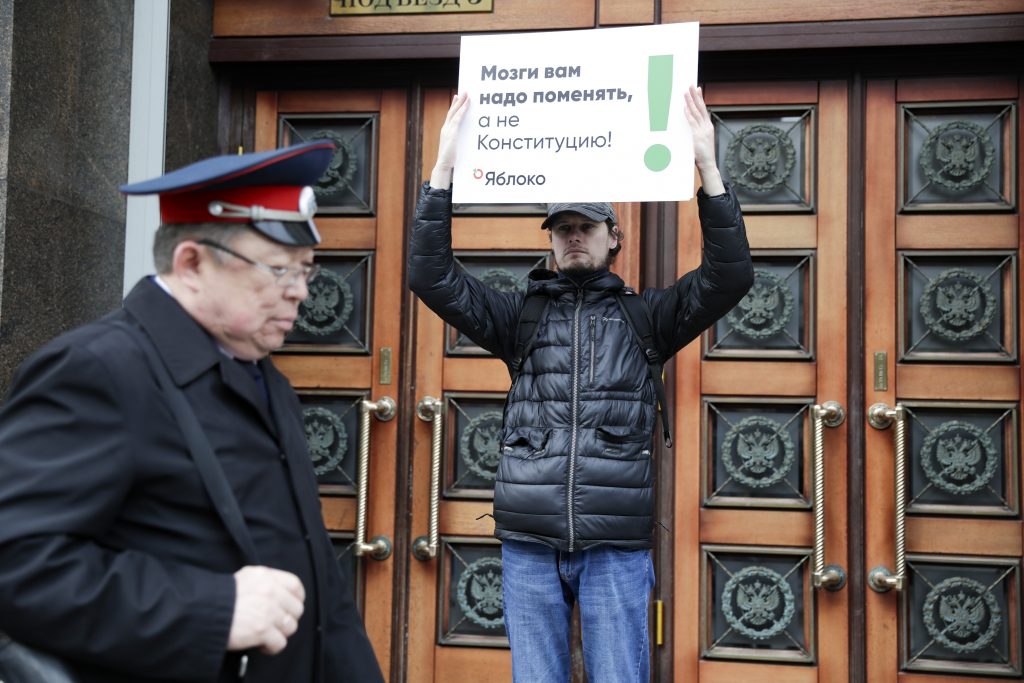 If Putin won and completed two more terms as president, it would make him the ruler of Russia for 36 years — longer than any other leader in its modern history.

The measure must still be approved by the country’s Constitutional Court and by a nationwide vote next month before they come into force. Putin’s critics called for protests, condemning the move as a way to keep him in office after he hits his term limit in 2024.

The Kremlin-controlled lower house, the State Duma, endorsed a set of amendments to the Russian Constitution and a provision that resets the term count for Putin once the revisions come into force. It passed the chamber by a 383-0 vote with 43 abstentions, and several hours later sailed through the upper house, the Federation Council, by a vote of 160-1 with three abstentions.

It is unclear when the Constitutional Court will rule, but a nationwide vote on the proposed amendments is set for April 22.

The 67-year-old former KGB officer has ruled Russia for more than 20 years, becoming the country’s longest-serving ruler since Soviet dictator Josef Stalin, who was in power for 29 years.

After serving two consecutive four-year terms — a limit outlined in the current constitution — Putin shifted to the prime minister’s seat in 2008, with close ally Dmitry Medvedev becoming a placeholder president.

The length of the presidency was extended to six years under Medvedev, and in 2012 Putin returned to the Kremlin as president. In 2018, he was reelected for another six years.

Putin has weathered multiple international storms during his tenure. The 2014 annexation of Ukraine’s Crimean Peninsula boosted his approval ratings that have remained high despite Russia’s economic troubles amid a showdown with the West.

Putin has used those tensions to consolidate support at home and strengthen his image as a strong leader standing up to foreign pressure.

The constitutional amendment was proposed Tuesday by lawmaker Valentina Tereshkova, a former Soviet cosmonaut who was the first woman in space in 1963.

The measure restarts Putin’s term to zero, once it is up in 2024. It would allow him to run for president twice more after that, if he chooses.

The review of the provision by the Constitutional Court is widely seen as a formality.

Resetting term limits allows Putin to avoid becoming a lame duck, helping him rein in political elites who were nervous about who would succeed him.

The motion to restart the term count for Putin from scratch prompted immediate calls for protests from various opposition groups. On Tuesday night, about 200 people gathered near the Kremlin and lined up to hold solo pickets — the only form of protest in Russia that is legal without prior authorization from the government.

“It was clear from the start that it is being done to keep Putin in power forever,” opposition activist Alexei Miniaylo, who called for the pickets on his Facebook page Tuesday and continued protesting on Wednesday night as well, told The Associated Press. “But the brazen manner in which it was done elicited outrage.”

Two opposition groups called for a bigger rally in Moscow on March 21 or March 22 and applied for permission from city authorities. Soon after, Moscow City Hall announced a ban on outdoor events with attendance of more than 5,000 until April 10, saying it was part of precautionary steps to prevent the spread of the coronavirus.