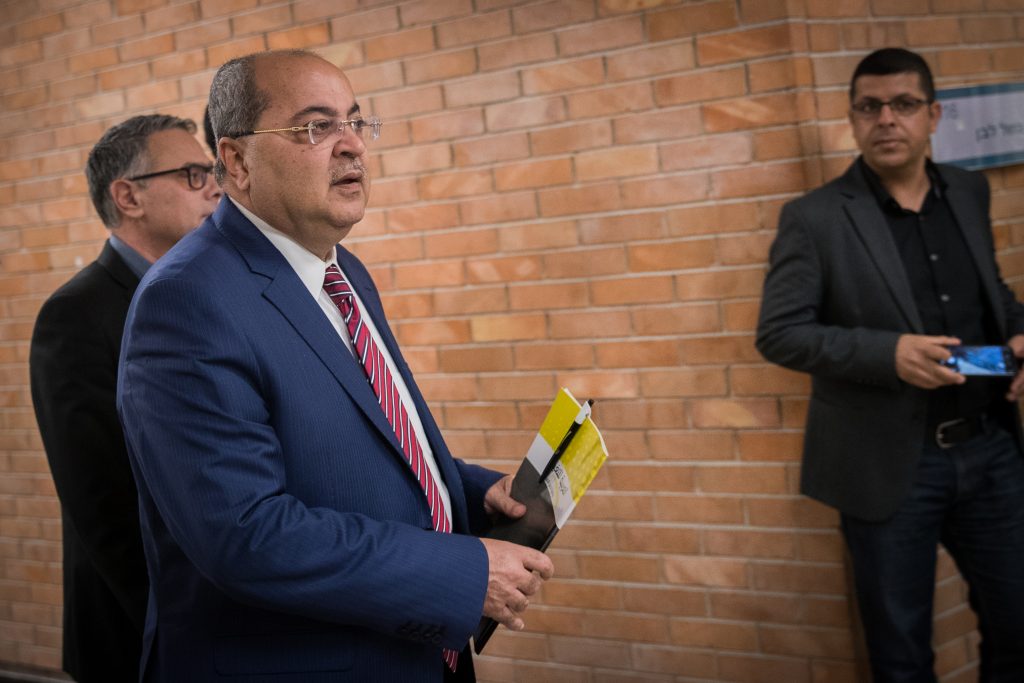 Blue and White leader Benny Gantz moved ahead in his efforts to forge an alliance with the Joint Arab List on Wednesday, despite the emergence of dissent among MKs in his center-left bloc.

Gantz met on Wednesday with Labor party head Amir Peretz, trying to put a business-as-usual face on matters after Gesher leader MK Orly Levy-Abekasis stunned the nation on Tuesday with her personal declaration of no-confidence in an Arab-backed coalition. She thereby joined Blue and White MKs Yoaz Hendel and Tzvi Hauser in openly opposing the prospective deal. As such, Gantz’s prospects of assembling a coalition, even with JAL, appear to have been fatally undermined.

Nevertheless, Gantz and Peretz made no comment on the setback and released a statement saying they “agreed to continue their strategic partnership and to continue with efforts to form a government, harnessing all the partners in the political system to prevent Netanyahu and Likud from dragging the country to a fourth election.

In a separate statement, Peretz sought to quell speculation that, with Gantz’s coalition slipping away, he might go over to the Likud-led bloc of Prime Minister Binyamin Netanyahu‏‏.

He said it was “important for me to clarify that despite developments”—an apparent reference to Levy-Abekasis—“I have no intention of helping in the establishment of a narrow rightist government led by Netanyahu that stands opposed to my ideological worldview.”

Blue and White negotiators, Ofer Shelah and Avi Nissenkorn met with representatives of the Joint List on Wednesday. But it was not clear how close the two sides really are to an agreement.

MK Ahmad Tibi of the Joint List said vaguely after the meeting that the two sides “exchanged positions on the recommendation to the president and parliamentary issues.”

Tibi added that they would return to the party for consultations, but both sides “reject the campaign of incitement.”

Meanwhile, Orly Levy-Abekasis continued to be the target of left-wing wrath. Meretz leader Nitzan Horowitz, No. 3 on the Labor-Gesher-Meretz list, joined the chorus of those demanding she resign her Knesset seat obtained from left-wing votes.

“MK Orly Levy has to return the seat. Her words were irresponsible and risible. Throughout the campaign, the members of Labor-Gesher-Meretz, including she herself, were clear in their support for a narrow government led by Gantz and supported by the Joint List. Backing out of that promise is spitting in the face of the voters. She should step down from the position she was given by left-wing voters,” Horowitz said.

Meretz MK Zehava Gal-on said that Levy-Abukasis was “a thief who got herself into the Knesset on the backs of the left. She must immediately resign the Knesset and return the mandates to the left.”

In her statement of refusal to go along with Gantz’s outreach to JAL, Levy-Abekasis revealed that she had been pressured to run with the left-wing Meretz:

“I will not support a government that leans on the support of Balad and the Joint List, and I don’t see myself as obligated anymore more to cooperation with Meretz, something forced upon me and my partner [Labor head] Amir Peretz, with pressure from many outside sources, first and foremost Blue and White.”

Coming to her defense was Simcha Rothman, a prominent right-wing activist, who explained that Levy-Abekasis had agreed to a Joint List-backed government during the campaign, saying “she said she had no problem that they [the Joint List] support [a minority government] from outside it on social issues. Establishing a government dependent on Balad for its very founding and every subsequent vote isn’t ‘support from outside by the Joint List on social issues.’ It’s the end of Zionism.”

Balad, the most virulently anti-Zionist of the JAL’s four factions, was included in the meeting with Blue and White on Wednesday.

Levy-Abekasis complained to Knesset security of being inundated with threats since announcing her refusal to support a government backed by the Joint List, The Times of Israel reported.

She said her number was distributed online and she has since received thousands of text messages and phone calls by angry left-wingers, threats of physical harm. One person told her he’d throw a grenade at her house.

The complaint has been forwarded to the police.