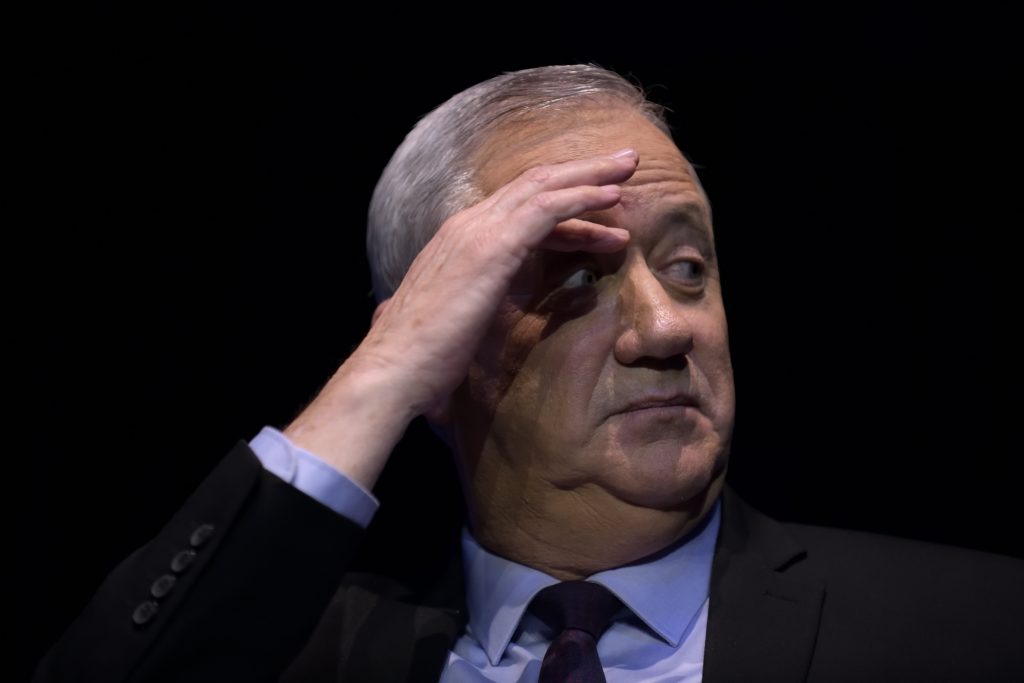 With Gesher head Orly Levy-Abukasis declaring Tuesday night that neither she nor the other two Gesher MKs will support Benny Gantz’s efforts to propel himself to the Prime Minister’s office with the help of the United Arab List, the Likud is working to convince Labor head Amir Peretz to join a government headed by Binyamin Netanyahu. A report in Yisrael Hayom Wednesday said that the main message to Peretz is that a Netanyahu-led government is the only option at this point to avoid fourth elections, and that Blue and White “will throw you under the bus” when it decides it doesn’t need Labor’s help anymore.

In a dramatic announcement Tuesday night, Levy-Abukasis wrote that “in light of recent political developments, where we see leaders violating basic norms and promises, some issues must be clarified. We are all witness to the embarrassing pursuit of a deal with elements by people who had promised to act honestly and responsibly, in which they are ready to pay any price to establish a minority government. It is even more shocking that major decisions, like negotiations with the United Arab List and its Balad component, are being made by a small group,” the “cockpit” leadership of Blue and White. “This does not obligate me. I will not support a government that relies on Balad and the United Arab List, and I do not see myself as obligated any longer to a deal with Meretz, that was forced on me and on my partner, Amir Peretz, by individuals in Blue and White. I said this before the election and I say it now, and I clarified this to Peretz right after the election,” Levy-Abukasis wrote.

In interviews before the election, Gantz had said numerous times that he would not establish a government with, or with the help of, the List, but MKs on the left accused Levy-Abukasis of “trying to steal the election.” Labor MK Omer Bar-Lev said that party head Peretz was “in shock. She was politically dead and he revived her.” Meretz MK Zehava Gal-on said that Levy-Abukasis was “a thief who got herself into the Knesset on the backs of the left. She must immediately resign the Knesset and return the mandates to the left.” Although Gantz will not have enough votes to get himself named Prime Minister without the Gesher votes, Blue and White MK Ofer Shelach said that the plan was still on, and that the party did not need Gesher’s votes to make the deal.

Reaction on the right was far more positive. In a social media post, Diaspora Minister Tzippy Hotovely said that “Orly Levy did the right and moral thing. Together with those inside Blue and White who oppose a deal with the United Arab List, namely Zvi Hauser and Yoaz Hendel, we can say that Israeli politics is divided between those who understand that ‘Zionism’ and ‘conscience’ are concepts that must be paid attention to, and those who are prepared to sell their country to steal elections.” Transportation Minister Bezalel Smotrich directly address Levy-Abukasis, saying “thank you Orly, You are an island of sanity in a sea of lies.”

Public Security Minister Gilad Erdan said that the declaration was a “pleasant surprise” for the Likud. In a statement, he said that after investigating. “I received a clear indication that nothing was promised her. We were also surprised by her message.” Yediot Achronot said that she was likely greatly influenced by her brother, Jacky Levy, a Yisrael Hayom columnist and Likud activist.

Meanwhile, Likud minister Yoav Galant on Wednesday sent a personal message to Gantz warning him away from the plan to work with the List to establish a government led by him. “We have both for years known Gabi Ashkenazi and his murky and questionable actions. He lies because that’s what he does. He is the one pushing you to go through with this questionable deal with the List, but behind your back he is working against it – the purpose to harm you politically and put himself in position to take over the party.”