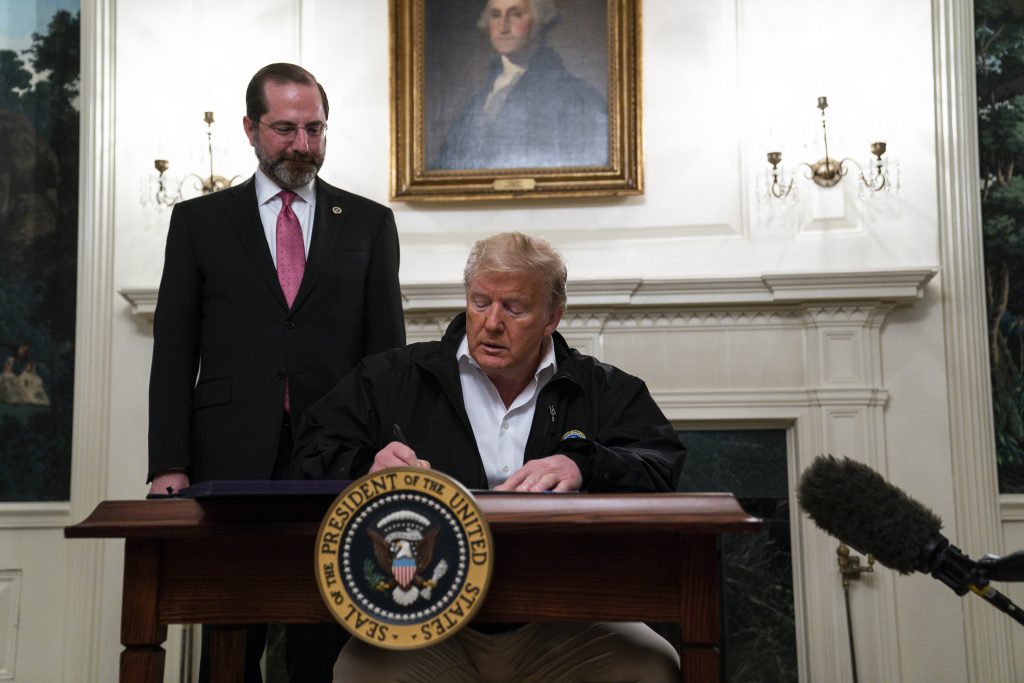 White House advisers on Monday plan to present President Donald Trump with a list of policy changes they hope could stem the economic fallout of the coronavirus, including paid sick leave and emergency help for small businesses, according to a senior administration official.

The talks have accelerated as congressional leaders said they are considering their own legislative remedies to address the economic turmoil. Congressional Democrats are discussing how to propose paid sick leave as part of new legislation, and a key Senate Republican is looking at changes to tax policy that could seek to address the heightened fears.

But many policymakers are now focused on options that advisers will offer Trump this afternoon when he returns from Florida. The list includes deferring taxes on specific industries hit by the coronavirus downturn, such as the hospitality and travel industries, as well as a “cash flow injection” for small businesses through the Small Business Administration.

The senior administrator spoke on the condition of anonymity and would not give more details about other options under consideration. The White House has faced intense pressure to arrest falling markets and stabilize an economy that investors increasingly fear may tip into recession. Many Democrats, meanwhile, are insisting that the government implement paid sick leave policies to help Americans who are forced to stay home because they are sick.

White House officials have also discussed providing funds that would be targeted to help areas of the country particularly hit by the coronavirus downturn, according to one person who recently spoke with senior aides and spoke on the condition of anonymity to discuss private deliberations.

Stock markets tanked on Monday in one of their worst days in years, with Dow Jones industrial average falling as much as 2,100 points. The White House National Economic Council and Treasury Department have for 10 days been discussing potential measures to respond to the coronavirus’s damage to the economy.

White House officials have invited senior bank executives to meet this week to discuss the economic turmoil, though it’s unclear what agenda the Trump administration might bring to the gathering.

Last week, The Washington Post reported that White House officials were looking at deferring taxes for the airline, travel and cruise industries.

The president has not approved any of the potential options yet.

Congress last week passed an $8.3 billion emergency spending bill that focused on medical and public health needs caused by the coronavirus outbreak, but Democrats are already working on a new bill that would seek to address the economic problems that are rapidly expanding.

“I believe that this is precisely the direction we need to go in. There are the economic consequences from the crisis that are of equal concern as responding on the health-care side,” DeLauro said.

“Everybody is trying to move at warp speed,” DeLauro said, although the timing, price tag and exact contours of any legislative response is uncertain.

DeLauro has introduced legislation mandating 14 days of paid sick leave in the case of an emergency health crisis such as coronavirus, noting that most workers – especially low-wage workers – have no paid sick leave and thus would face difficulty complying with medical quarantine advice.

Senate Finance Chairman Chuck Grassley (R-Iowa), meanwhile, is looking at “targeted tax relief measures” with the aim of providing a “timely and effective response to the coronavirus,” a spokesman said Monday. Committee spokesman Michael Zona said Several options under the committee’s jurisdiction were being reviewed as they learn more about the impact on specific industries and the economy as a whole. He did not specify what the measures might be. Industries including airlines, cruise ships and hotels have been hit hard by the virus and are seeking relief from Congress and the White House.

Trump has previously floated a payroll tax cut in response to the crisis, a measure Larry Kudlow, the president’s top economist, suggested last week could be ineffective. Trump continued to downplay the danger posed by coronavirus with several tweets on Monday, even as the stock market fell precipitously.

The president celebrated sharp decline in oil prices, which investors fear signal a deflationary sell-off in a bidding war between major oil-producing nations. “Good for the consumer, gasoline prices coming down!,” Trump said about the decline, which experts warn could foreshadow a recession.

Trump also said on Twitter: “Saudi Arabia and Russia are arguing over the price and flow of oil. That, and the Fake News, is the reason for the market drop!”