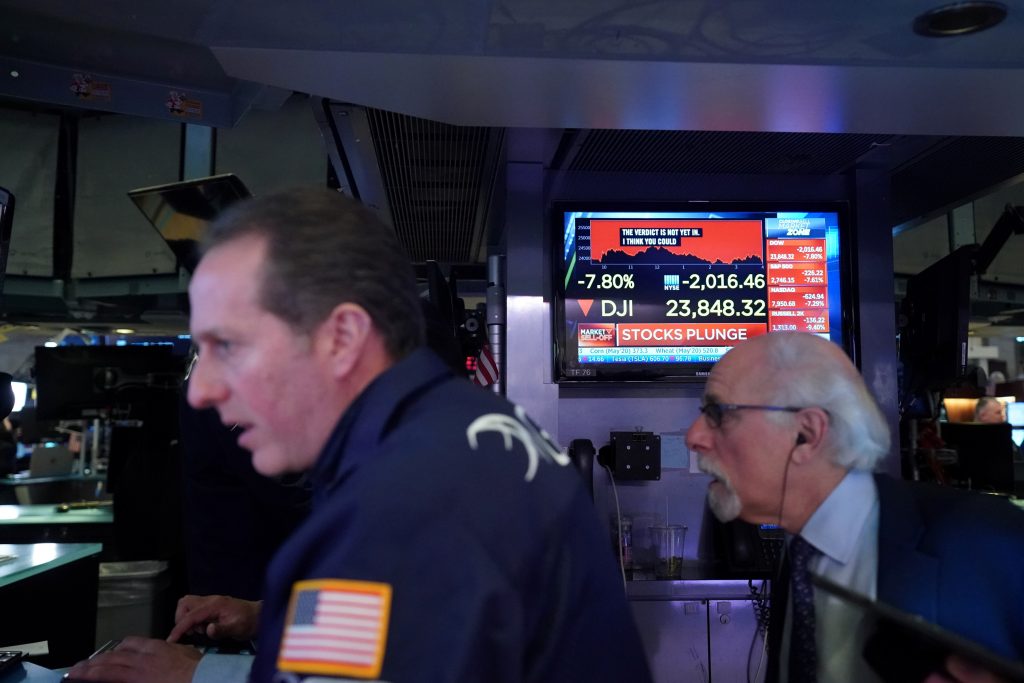 The Dow Jones Industrial Average tumbled 7.8% Monday, its steepest drop since the financial crisis of 2008, as mounting fears over the coronavirus combined with a crash in oil prices to send a shudder through world markets.

The staggering losses immediately raised fears that a recession might be on the way in the U.S. and the record-breaking 11-year bull market in the U.S. might be coming to an end.

The drop on Wall Street was so sharp that it triggered the first automatic halt in trading in more than two decades. European stock indexes likewise registered their heaviest losses since the darkest days of the 2008 meltdown and are now in a bear market.

Together, the damage reflected growing alarm over the potential global economic damage from the coronavirus, which has infected more than 110,000 people worldwide and killed about 4,000, while triggering factory shutdowns, travel bans, closings of schools and stores, and cancellations of conventions and celebrations.

“The market has had a crisis of confidence,” said Willie Delwiche, investment strategist at Baird.

The market slide came as Italy, the hardest-hit place in Europe, began enforcing major travel restrictions. The turmoil is expected to push Italy into recession and weigh on the European economy.

Elsewhere around the world, Ireland went so far as to cancel parades, and Israel ordered all visitors quarantined just weeks before Passover, one of the busiest travel periods of the year.

In the U.S., a cruise ship with a cluster of coronavirus cases that forced it to idle off the California coast for days arrived at the port of Oakland as officials prepared to start bringing passengers to military bases for quarantine or get them back to their home countries. The Grand Princess had more than 3,500 people aboard — 21 of them infected with the virus.

The escalating health crisis combined with another, intertwined development — plummeting oil prices — to drag down the market: The price of oil sank nearly 25% after Russia refused to roll back production in response to virus-depressed demand and Saudi Arabia signaled it will ramp up its own output.

While low oil prices can translate into cheaper gasoline, they wreak havoc on energy companies and countries that count on petroleum revenue, including the No. 1 producer, the United States.

President Donald Trump was scheduled to meet with Treasury Secretary Steven Mnuchin, economic adviser Larry Kudlow and other aides when he returned to the White House about a range of economic actions he could take. He also invited Wall Street executives to the White House later in the week to discuss the economic fallout of the epidemic.

On Wall Street, the S&P 500 plunged 7.4% in the first few minutes after the opening bell before trading was halted by the market’s circuit breakers, first adopted after the crash of October 1987 and modified over the years to give investors a chance to catch their breath. The market-wide circuit breakers have been triggered only once before, in 1997.

The S&P 500 has fallen 18.9% from the record high it set on Feb. 19 and has lost $5.3 trillion in value during that time. U.S. stocks are now uncomfortably close to entering a bear market, defined as a drop of 20% from its peak.

The interest rate, or yield, on U.S. Treasury bonds sank to all-time lows as investors looking for a safe place kept sinking money into them, even as the return on their investment sank closer and closer to zero. The yield on the 10-year Treasury note plunged to 0.59%. Up until last week, it had never been below 1%.

The carnage in the energy sector was particularly bad. With benchmark U.S. crude dropping to under $32 a barrel, Marathon Oil, Apache Corp. and Diamondback Energy each sank more than 40%. Exxon Mobil had its worst day since 2008, while Chevron had its second-biggest drop ever.

For most people, the new coronavirus causes only mild or moderate symptoms, such as fever and cough. For some, especially older adults and people with existing health problems, it can cause more-severe illness, including pneumonia. The vast majority of people recover from the new virus, as has already happened with about three-quarters of those infected in China.

In the U.S., the number of people infected climbed to around 600, with at least 26 deaths — at least 19 of them associated with a single Seattle-area nursing home.