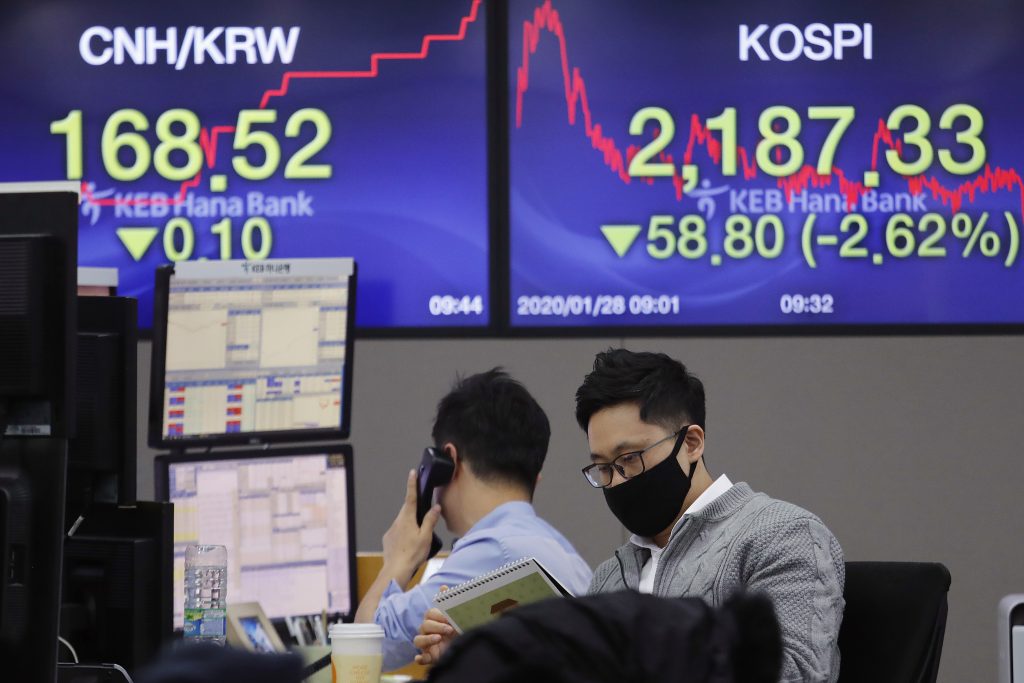 Markets have endured roller coaster ups and downs for weeks amid uncertainty over how much damage the outbreak of the new coronavirus will do to the global economy.

Vishnu Varathan at Mizuho Bank in Singapore said the potential damage from the new virus was two-fold, with the initial impact coming from a direct impact on the economy.

“One succumbs to the sheer fear of community spread, prospects of deep economic impact from a sharp drop off in demand for travel and seizures in supply-chains,” Varathan said in a commentary.

“The other is a strain that thrives on hopes of stimulus; be it frantic central bank rate cuts, the lull of liquidity infusions or more targeted fiscal offsets to provide pain relief,” he said.

On Wall Street on Thursday, major indexes lost roughly 3.5%, nearly wiping out the rally from a day before that was fueled by hopes authorities around the world will move to cushion the economic fallout.

These vicious swings are likely to continue, as long as the number of new infections continues to accelerate, many analysts and professional investors say. Thursday was the fourth straight day where the S&P 500 moved at least 2%, the longest such stretch since the summer of 2011.

The growing understanding that the spread of infections — and resulting damage to the economy — may not slow anytime soon is pulling sharply on markets. That pull has taken turns this week with the increasingly worldwide push that governments and central banks are trying to give markets through spending plans and interest-rate cuts.

The yield on the 10-year Treasury note went as low as 0.81% for the first time in history, according to Tradeweb. Tumbling yields have brought the average rate on a 30-year fixed mortgage to a record low of 3.29%.

“It’s been a roller-coaster market in recent days for equity investors, and today we appear to be on the downward leg for that ride,” said Terry Sandven, chief equity strategist at U.S. Bank Wealth Management. “What you need is time, and unfortunately that is still going to result in volatility.”

In China, where the virus outbreak has been steadying, stocks trading in Shanghai have rallied nearly 12% since scraping bottom on Feb. 3. Factories there are gradually reopening, and a return to a sense of normal life may even be on the horizon following swift and severe actions by the government to corral the new form of coronavirus.

But elsewhere in the world, the mood is darker. There are about 17 times as many new infections outside China as in it, according to the World Health Organization.

In the U.S., the death toll climbed to 12 due to the virus. California declared a statewide emergency, Facebook is temporarily closing a Seattle office after a worker was diagnosed with the virus and an industry group said the outbreak could cost airlines as much as $113 billion in lost revenue.

Losses were widespread, and energy stocks in the S&P 500 dropped to their lowest level since March 2009, when they were emerging from the financial crisis.

“The Western world is now following some of China’s playbook, closing schools and declaring a state of emergency for example, but there is a sense that this is too little, too late,” said Chris Beauchamp, chief market analyst at IG.

U.S. congressional leaders reached a deal on an $8.3 billion bill to battle the outbreak, which the Senate passed Thursday, and the Bank of Canada followed up on the Federal Reserve’s surprise cut to interest rates the day before with its own.

Some economists expect the European Central Bank to take action to support markets before its meeting on March 12.