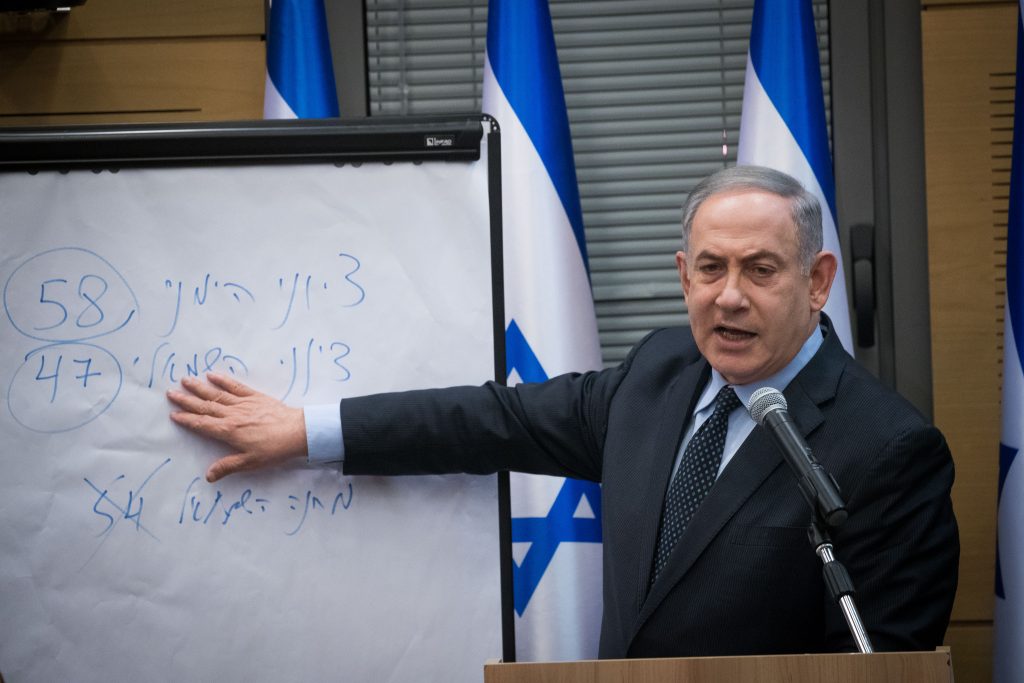 The final tally from Israel’s national election has left Prime Minister Benjamin Netanyahu’s right-wing coalition short of a parliamentary majority, ushering in yet another period of partisan horse trading and prolonging the country’s political stalemate.

The count, released Thursday, gives Netanyahu’s Likud party 36 seats in the Knesset, Israel’s parliament, compared with 33 for center-left Blue and White, the next largest party.

But the 58 seats controlled by Netanyahu’s coalition still fall short of what he needs to form a government and launch a record fifth term as prime minister. He will be at the center of negotiations to cobble together a majority even he prepares for to go trial on charges of bribery, fraud and breach of trust in less two weeks.

Here are five scenarios that could lead to Israel’s first functioning government in more than a year:

Netanyahu’s first option will be to seek defectors from parties that are not in his right-wing bloc, lawmakers who are either looking for a better deal or who are sick of the continued stalemate. Scooping up such individuals is perhaps the most elegant solution, but there are some constraints for individual Knesset members wanting to switch to one party after being elected with another.

One possible candidate is Orly Levy-Abekasis, head of the Gesher party that is now combined with Labor and Meretz. Levy-Abekasis has operated for the past few years as an independent candidate, and her main focus is social welfare issues and health.

The daughter of former foreign minister and onetime Netanyahu ally David Levy, Levy-Abekasis sparked speculation Monday, tweeting that she “hopes to wake up to a new era of action.” She removed the post a short time later, after journalists questioned whether she was suggesting willingness to join a right-wing coalition. But even if Levy-Abekasis, who has denied even contemplating going with Netanyahu, were to switch sides, it would not be enough to plug the three-seat gap.

It might be more straightforward for Netanyahu to try enticing an entire faction to join his bloc. Both Blue and White and the further-left party Labor-Gesher-Meretz are made up of smaller factions that united through the election process for strategic reasons.

Now that the election has passed, they are legally permitted to break apart. At this early stage, all the opposition parties are standing firm in their commitment not to join a Netanyahu-led government.

After increasing the size of his Likud party, Netanyahu is in a stronger position to forge a unity government with his main rival, Blue and White. Led by former military chief Benny Gantz, the party has insisted it will not serve under a leader facing criminal indictment.

But Blue and White, which is made up of three parties, could reconsider now that it is clear it does not have enough seats to outmaneuver Likud and to save the Israeli public from a fourth round of voting. But its position is much weaker than after the election in September, when it was the largest party and could make more demands.

For Netanyahu, too, this option has drawbacks. There is widespread speculation that he was hoping to form a coalition that would enable him to find a legal way to override the indictments against him, broadening his immunity, for example. Relying on Blue and White for a government would not afford him that option.

Another option would be for Netanyahu to try forming a minority government with backing from the outside. This could be a solution for hawkish former defense minister Avigdor Liberman, his onetime ally.

As head of the right-wing secular Yisrael Beytenu party, he has campaigned on a platform of not joining a government with the Chareidim and extreme-right-wing nationalists in the pro-Netanyahu bloc.

Liberman said in a news conference Tuesday that he would not give up on his principles but would do what he could to avoid a fourth election, suggesting his principles might soften depending on what Netanyahu offers him.

One final, and increasingly unlikely, option is for Blue and White itself to try forming a minority government, with outside support from the Joint List of Arab parties.

Based on the final results, there are more seats in the bloc of parties that do not support Netanyahu than in those that do, even though they are widely divided. If Gantz could bridge the gaps between the ultranationalist Liberman and the left-wing liberal Meretz, he has a chance to form a minority bloc.

He would then need to persuade that bloc to reach an agreement with the Joint List of Arab parties. Such an arrangement did not materialize in the last round due to opposition from within his faction.

It appears unrealistic this time, too, as members of Blue and White have talked of forming only a “Jewish-majority government.”

Joint List Chairman Ayman Odeh said Tuesday that he was unlikely to back Gantz this time, as he did after the previous election, because of racist comments by members of Blue and White.

If none of these scenarios work, Israelis could be heading back to the polls for a fourth time as soon as this summer.