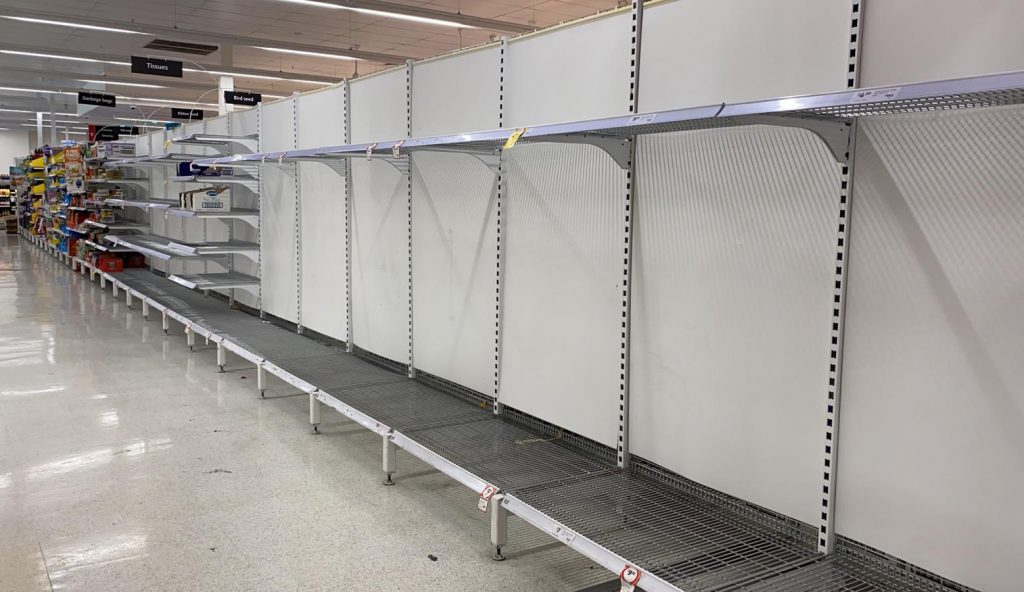 Australia’s major grocers put strict limits on purchases of toilet paper on Wednesday, after shoppers stripped shelves in a rush of panic buying spurred by fears over the coronavirus, while the country recorded its fourth case of local transmission.

One of the first nations to take a hard line in tackling the epidemic, Australia imposed border controls a month ago on visitors from the epicenter of the outbreak in China.

However, Australia now has 44 cases, four of them involving people who caught the disease despite not having left the country.

Despite the few sufferers compared to countries such as Iran and South Korea, social media has been awash in recent days with photographs and videos of people stockpiling goods, from staples to sanitizers.

The demand for toilet paper, in particular, along with photographs of overloaded shopping trolleys, led to calls for calm from baffled officials.

“We are trying to reassure people that removing all of the lavatory paper from the shelves of supermarkets probably isn’t a proportionate or sensible thing to do at this time,” Chief Medical Officer Brendan Murphy told a parliamentary panel on Wednesday.

The biggest grocery chain, Woolworths Group Ltd, limited sales to four packs a shopper, to keep up stock levels while suppliers ramp up production. The local arm of Costco Wholesale Corp limited buyers to one bulk pack each.

Even Prime Minister Scott Morrison has weighed in on a purchasing trend that appears to be at odds with other countries’ stockpiling of items with a long shelf life, such as canned goods, telling the public that major grocers had assured him they could meet any spike in demand.

Police confirmed they were called to a supermarket in Sydney to deal with “a disturbance in an aisle,” with media saying the authorities had cordoned off the toilet paper shelves as a result.

Shoppers have swooped on other products also. Costco has put limits on purchases of milk, eggs, rice, disinfectants and soap. Weeks ago, Coles Group Ltd began posting signs in stores warning of shortages of hand and laundry sanitizer.

Coles said it was working with suppliers and transport partners to improve availability of popular products, but did not confirm if it was also rationing sales of some.

“We have increased deliveries from our distribution centers and our teams are working hard to fill the shelves,” it said in an emailed statement.

German-owned discounter Aldi Inc and U.S.-listed Kimberly-Clark Corp, which makes toilet paper for the Australian market via domestic units, were not immediately available for comment.

While the bulk of Australia’s virus victims caught it overseas, the two latest cases involve people who have not left the country.

The most populous state of New South Wales said a female aged care worker had caught the virus, which has spread to at least one resident of the center where she worked.

It said an 82-year-old man was in the hospital, while officials await results of a test on a 95-year-old woman who died on Tuesday after developing a respiratory illness.

“Whether it was related to coronavirus, we don’t know,” State Health Minister Brad Hazzard told reporters about the death.

State officials were already investigating how a 53-year-old doctor was stricken, despite having no infected patients. A fourth case, announced on Monday, involved a woman who could have caught it from her brother.

Since Feb. 1, Australia has banned foreigners who recently traveled through China, and extended its ban last week to arrivals from Iran, but cautioned it could no longer guarantee an infected person would not penetrate border checks.

The government on Wednesday confirmed a man who had recently returned from Iran had caught the virus, prompting officials to order two weeks of self-isolation for anyone arriving from Iran since Feb. 19.